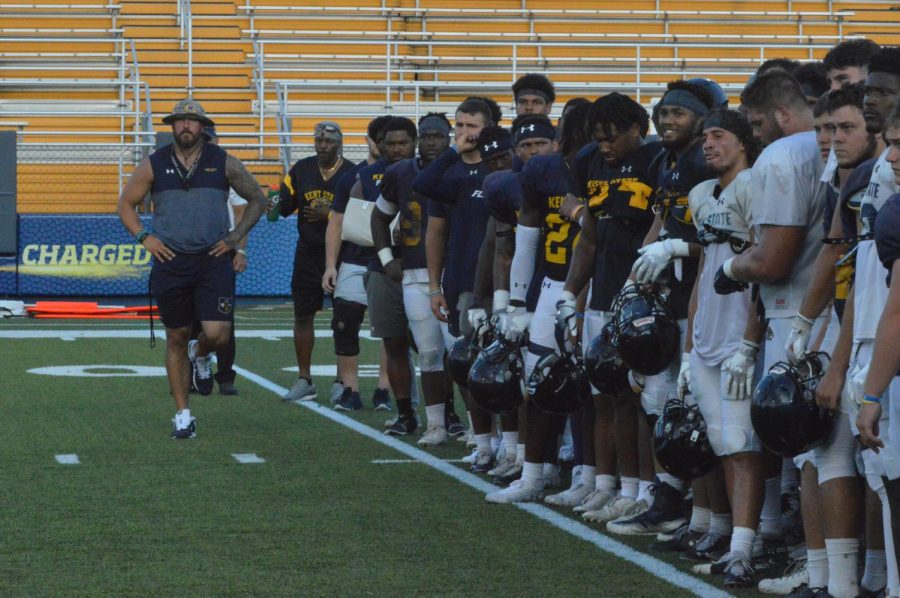 Monday morning, Lewis elaborated more on his comments about the situation at quarterback.

“Our kids know that we’ve created an environment here based on competition,” Lewis said. “Even though there’s a depth chart in place and we release, that they know each and every single week that there’s competition to earn the right to start. That’s across the board at every position.”

“I thought a change was warranted,” he said. “A big part of that decision, also, was that Crum has evolved and improved from the time that we’ve gotten here. He had earned the right to play through the way that he prepared and the way that he performed during spring ball.”

Lewis said both quarterbacks knew before the game they would play in the first half.

“We were pretty stagnant offensively in the first quarter, so Crum got the opportunity,” Lewis said. “Crum did some really good things. Obviously it needs to result in points, which we didn’t get, so we went back to Woody.”

The Flashes gave up 30 points, but the Kent State offense only produced 200 yards total, while Arizona State had the ball for almost 35 minutes.

Lewis said he was pleased with his defense, despite the score.

“They really did a nice job containing one of the better Pac-12 offenses from a year ago,” Lewis said.

The Sun Devils offense lost some production from last season with N’Keal Harry now in a New England Patriots uniform, and quarterback Manny Wilkins with the Green Bay Packers practice squad. Harry was named to the All-PAC-12 First Team twice and finished third in program history in catches (213) and receiving yards (2,889) in just three seasons. Wilkins finished fifth in school history in passing yards (8,624) and had more rushing touchdowns than any other quarterback in the PAC-12 last season (8).

“Eno Benjamin is an exceptional back, and for our defense to limit him to under four yards per carry was great,” Lewis said. “We’re top 10 in the country right now in sacks with five, and we had numerous other quarterback pressures.”

3. Solid punting could play a key role in the Flashes’ success.

Punting was something that plagued Kent State last season, as junior Derek Adams missed eight games with a hip injury.

Adams finished last season averaging 40.1 yards per punt on 31 punts and had seven punts over 50 yards.

“Obviously, a healthy Derek helps us all,” Lewis said. “He has great ball placement, and he’s able to flip the field.”

Adams pinned Arizona State within their 20-yard line in five of his nine punts and had three punts of 50 yards or longer. He was named the Mid-American Conference Athlete of the Week on Special Teams.

4. Limiting the triple-option will be key in Saturday’s matchup against Kennesaw State.

The Flashes’ next opponent Kennesaw State had 433 rushing yards in a 59-0 win against Point on Aug. 31. The Owls averaged almost eight yards per carry.

“We have to do a great job of being assignment sound,” Lewis said. “That’s one thing you’ll always hear when teams are preparing for the triple-option.”

The Owls had 16 players attempt a run. They had five players with a rush of 20 yards or longer.

5. Lewis is keeping the status of key players vague heading into Saturday’s matchup.

“We have to see where that goes throughout the course of the week,” Lewis said. “Having the extra few days to recover obviously helps. We have to see how they continue to progress.”

Kickoff is set for noon Saturday at Dix Stadium.