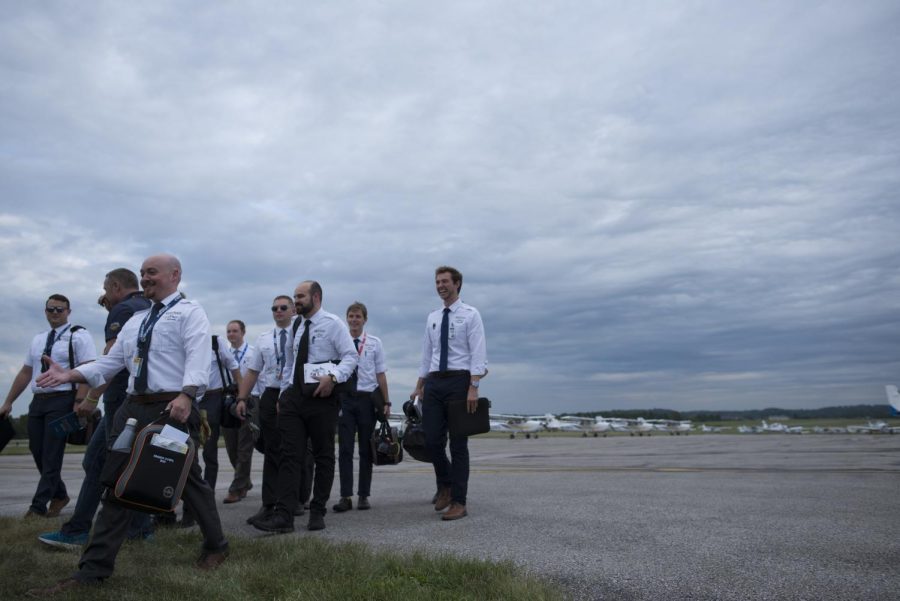 Pilots return to their friends and family after an air show at the Kent State FedEx Aeronautics Academic Center grand opening on Sept. 6, 2019.

FedEx Aeronautics Academic Center takes off at the Kent State Airport from Erin Simonek on Vimeo.

Officially titled the “FedEx Aeronautics Academic Center”, the 17,800 state-of-the-art facility is the first brick and mortar building at the Kent State Airport in Stow, and the second building overall for the College of Aeronautics and Engineering.

Christina L. Bloebaum, dean at the College of Aeronautics and Engineering, began the opening ceremony by introducing several program attendees, including President Todd Diacon and Board of Trustees Vice Chair Shawn Reilly.

Former interim Dean of the College of Aeronautics and Engineering Robert Sines was also in attendance, alongside Kent Mayor Jerry T. Fiala and several FedEx representatives.

Bloebaum acknowledged the College of Aeronautics and Engineering’s previous approach to education at the airport, making reference to the former aging infrastructure that once stood in place of the new building.

“I’m sure that the aeronautics and engineering alumni and current students joining us here today will find this new facility an amazing replacement for the classroom trailers (that were here) for almost 40 years,” Bloebaum said.

The trailers in which classes were previously held were only meant to be temporary. The new facility replaces the trailers with several collaborative spaces, including a new classroom on the building’s east side.

Attendees were able to tour the facility immediately following its unveiling as well as a flyover by Kent State alumni instructors and students.

Flight simulators populate the building, as the center provides space for large flight simulators, including the AL172 which replicates a Cessna 172SP Skyhawk Nav III aircraft. Additional pilot training in the form of mixed reality is also housed at the building.

The right side of the building accommodates faculty with several new offices and conference rooms.

“From students to alumni, instructors to mechanics, everyone who is going to use these facilities and interact with our program will benefit from this new building,” Bloebaum said. “In CAE, we are not afraid of the future, we embrace it.”

President Todd Diacon expressed gratitude for FedEx’s role in making the building a reality during the opening ceremony.

“Because of (their) gift, we will better educate generations of new pilots. Generations of air traffic controllers, generations of aeronautical engineers and hopefully we’ll pay back (their) generosity by producing great, potential employees.”

FedEx Corp. provided $5 million to the cause in May. The Board of Trustees accepted the donation on May 9, the final meeting of the spring 2019 semester. It was the second contribution FedEx Corp. made to the university’s aeronautics program, having previously pledged $1.5 million in 2016.

The 2019 Boeing Pilot & Technician Outlook projects 804,000 pilots will be required by 2038. With enrollment to the university’s aeronautics and engineering programs quickly growing, the new facility will provide several ways for students to learn.

Don Dillman, senior vice president of Flight Operations at FedEx Express, reiterated the need for aeronautics students to have the necessary tools to prepare for the future.

“It’s imperative that we get the next generation of aeronautics and engineering professionals off to a good start,” Dillman said.

Nick Lavrisiuk is the construction and master plan reporter. Contact him at [email protected]