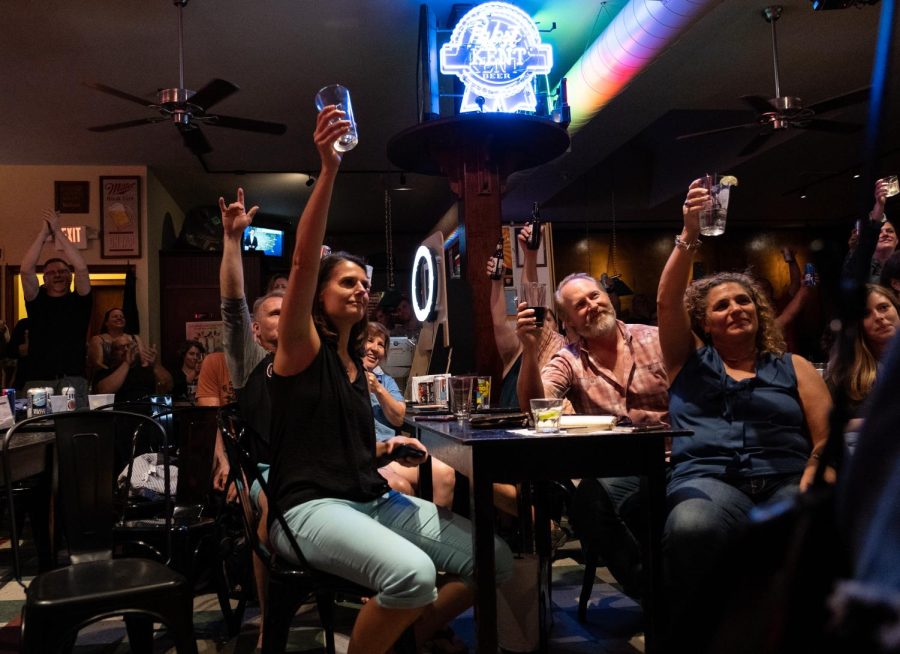 Venice Cafe patrons raise their glasses while Roger Hoover and the Whiskeyhounds perform their final song at Venice Cafe during Kent's Round Town music festival on Friday, September 13, 2019.

Live music filled the streets on Friday as Kent’s ‘Round Town Music Fest welcomed more than 30 acts at 29 venues throughout downtown and the surrounding area.

Local businesses including bars, coffee shops and restaurants served as performance venues for a variety of artists.

“For the most part, all of these venues are within a block or two of each other and it makes it real easy to check out a lot of good music and a lot of different styles,” said Mike Beder, one of the festival’s directors and co-director of the Crooked River Arts Council.

The council, which is a local nonprofit, organizes the ‘Round Town Music Fest. The council focuses on supporting local music, arts and youth and putting on free music events such as the Kent Beatlefest, American Roots Music Fest and Blues Fest. Since becoming under new management in 2008, the council has taken a more active role in the community.

As the council has undergone changes, so has the music festival. Starting as the Kent State Folk Festival and remaining so for almost 50 years, the festival changed hands several times before being renamed the ‘Round Town Music Fest about six years ago.

“Most of the overhauling took place with the name change,” Beder said. “That’s why they changed it to “‘Round Town,” which didn’t require the venues to host any specific type of music. Over the years we’ve had everything from electronic to hip hop to reggae to classical.”

One band that took part in the festival this year was The Outside Voices, a rock ‘n’ roll band that often performs locally.

The band spent time touring across the county for its second full-length album “Stoned & Lonely,” which was released in March.

“It’s fun for us because we have a lot of friends in bands that are also playing the festival,” he said. “A lot of the times, you don’t get to see all of your friends play because you’re playing a show at the same time they are.”

Halling also said the event is a great way for the local music community to connect and give exposure to both new and established bands.

Many people head downtown for the festival annually. After hearing about ‘Round Town in the Record-Courier, Donna Oneal of Streetsboro came for the music and the variety of acts that the event provided.

Others, such as Rose Nelson from Munroe Falls, came to see Monica Robins and the Whiskey Kings and was surprised to discover that it was not just a single act, but a whole festival.

Whether people come for a specific act or to see as many as possible, the festival continues to provide music from both regional and national artists, all free and all within a few blocks of one another.