Kent State couples return to campus for Kiss on the K 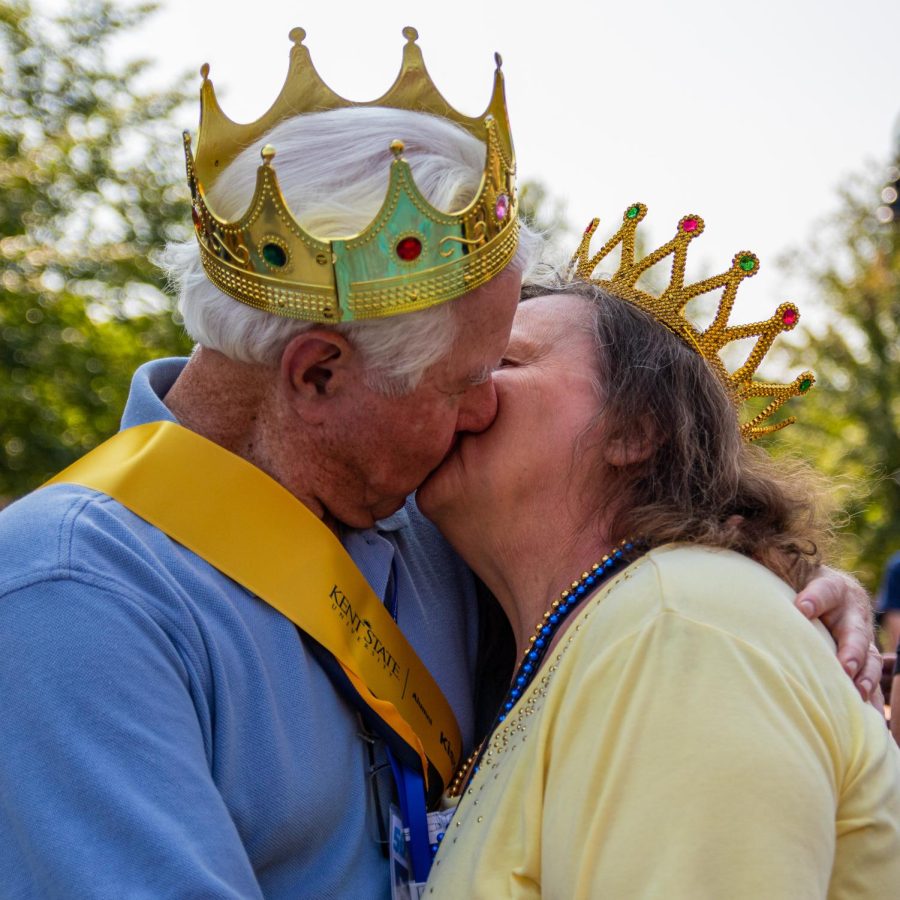 Bill and Renee Vanderwyden, Kent State Class of 1969 and 1971 respectively, sharing a kiss on the K in Risman Plaza. The Vanderwydens met when Bill was student body president in 1969. The two have been married for 48 years.

Since 2011, the Alumni Association has hosted the Kiss on the K and chooses four or five couples, who are usually Kent State alumni, every year to honor their relationships. This year’s honorary couples are listed on the Kent State alumni website.

Nicole and Haidar Shafei, one of five selected honorary couples, started dating in 2014 after meeting through a mutual friend. Mrs. Shafei said they would spend a lot of time together in the library learning about the other’s culture.

“We would study together in the library and that’s where our relationship really blossomed,” Nicole said. “Him being an international student and me not knowing really any Saudi Arabain things, I really got to know him at the library.”

Marquita Rodgers, program coordinator for Alumni Relations, said Kiss on the K “is the Alumni Association’s way of recognizing couples that met here at Kent State or couples where Kent State has played a role in them becoming a couple.”

Rodgers added that the nomination process opens annually at the end of the summer and couples can either be self-nominated or nominated by others.

“We look for compelling stories, we look for stories that have meaning not only for the couple but something that would resonate with the audience that we have,” Rodgers said.

Honorary couple Jennifer Cobb and Cody Shearrow said they’ve been together for five years after meeting each other in 2014. Cobb said she had been having a rough time in college up until that point, but Shearrow was able to turn things around for her.

“I really just needed a shoulder to cry on and I was not okay at all, but he really, truly did save my life,” Cobb said. “I’m just really thankful that Kent brought us together.”

Bill and Renee VanderWyden, who have been together 50 years since meeting in 1968, said their best Kent State memory was meeting each other. Bill said he knew she was the one the night of their first date.

“I picked her up at … Beall Hall and I get out of my car and there was a flat tire — and it was raining. … And so, she comes out with an umbrella and held it over me while I changed the tire,” Bill said. “I knew right away I had a good woman.”

“He biked 58 miles from Mansfield, Ohio to Kent State to come see me,” Chickos said. “He does all these amazingly sweet things.”

Before he left the event, Bill VanderWyden had a few words of advice for current student couples.

“If you really love each other you listen more than you talk, and you have to be committed,” VanderWyden said. “Every marriage or relationship has ups and downs, and you work your way through them, and when you come out you’re stronger.”