Kent State goes 2-0 on the weekend 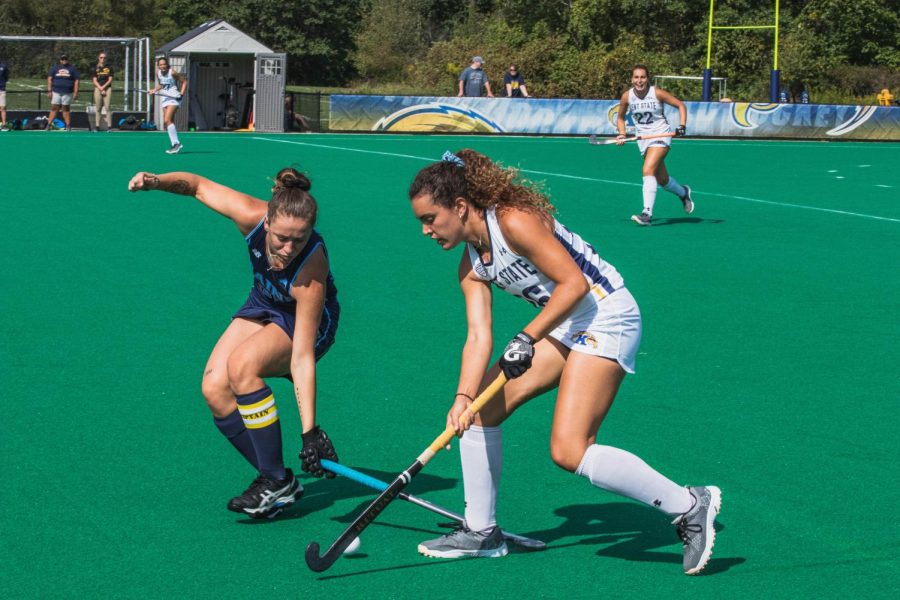 Two Players, one from Maine (Left), and the other player, Clara Rodriguez Seto (#23,Right) go for the ball hoping to pass it to other teammates or better yet the goal. Kent State won the, Kent State v Maine Game, 2-1. Murphy-Mellis Field. Sept. 8 2019

Kent State field hockey beat Temple and Maine over the weekend, putting them 3-2 on the season.

Kent State outshot Temple 17-12 on Friday, beating them 3-0. This is the first win for the Flashes in September, following a two-game losing streak.

“We had a little bit of a rough patch, with losing to Michigan State and then Louisville,” coach Kyle Desandes-Moyer said. “It’s nice to go 2-0 on a weekend at home.”

On Sunday, Kent State beat the University of Maine 2-1.

“Beating a ranked team means a really strong program, so we knew it was going to be a battle,” Desandes-Moyer said. “I’m just really proud of my team.”

“I think we really stuck together as a team,” sophomore forward Luisa Knapp said. “I think it just worked out today.”

Knapp scored the first goal of the game in the first period, with junior Clara Rodriguez Seto following with a goal of her own in the second.

“We just try to give our best and try to stick together as a team,” Knapp said.

The Flashes have most of the week off before traveling to St. Louis on Friday to play Fairfield University and Saint Louis University on Sunday. They have two more weekends before MAC play begins.

“We just want to keep the energy high through all four periods,” Fernsler said. “We want to stay gritty.”

Gina Butkovich is a sports editor. Contact her at [email protected]