EHHS tailgating tent brings together past and future of Kent State 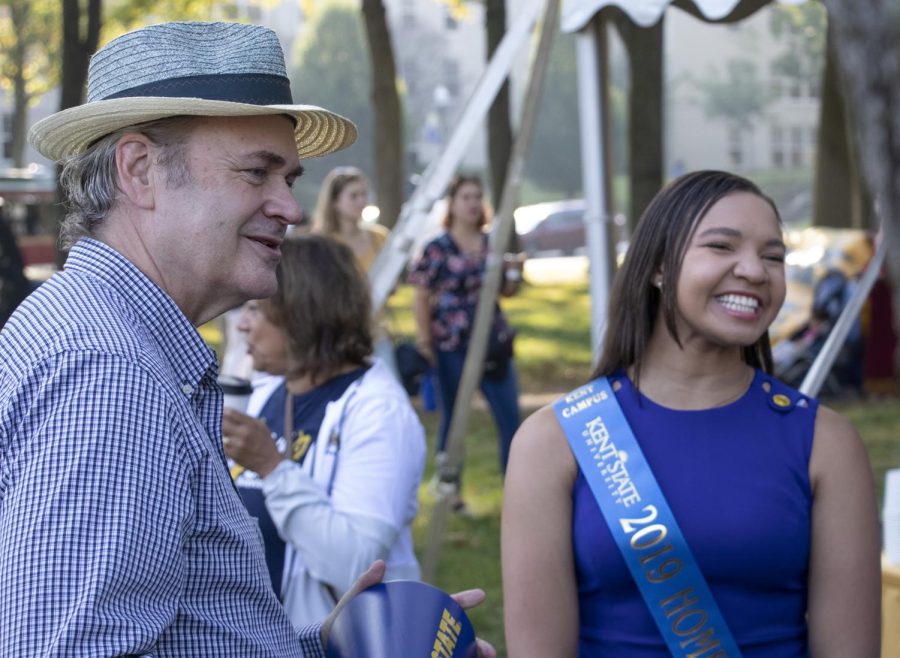 The College of Education, Health and Human Services (EHHS) hosted its EHHS Tailgate Homecoming Tent near the rock on front campus Saturday.

EHHS faculty set up the homecoming tent to get students connected with professors and alumni, as well as to get others involved in the homecoming festivities. The tent had water bottles, lip balms and hand sanitizer to give out to those who attended.

Kent State President Todd Diacon was in attendance at the EHHS tent, as well as many other homecoming events.

“We have such accomplished alumni for our students to meet and interact with,” Diacon said. “We look forward to today’s students becoming those alumni.”

Michael Login, director of budget and business operations for EHHS, said he’s grateful for the relationships he’s formed within the college.

“EHHS has given me an opportunity to interact with all segments of the campus from faculty to administrative folks,” Login said.

Chia-Ling Kuo, an associate professor of Educational Technology with EHHS, has been working at Kent State for 15 years.

The EHHS tailgating tent also attracted students who have majors outside of EHHS.

Rachel Iacano, a junior psychology major, said her minor within EHHS has provided her with unique opportunities.

“I think it (EHHS) gives you a strong and wider background to prepare you to work with more diverse populations,” Iacano said.

Megan Gottsacker, a junior nursing major, attended the event with her parents, Bill Gottsacker and Joan Gottsacker. The two met at Kent State during their college years.

“My parents met at Kent State, so it’s a good time for them to come back,” Megan said.

Joan said the homecoming events pose a unique opportunity for their daughter.

“It’s definitely good networking,” Joan said. “In Megan’s case, she also gets to hear about the history through our eyes.”

The homecoming tent hosted by EHHS provided a segue to other homecoming events that Kent State fans were attending.

“I’ll be going to the College of Nursing, the Honors College, and the football game,” Megan said.

Kedron Trapp is the communications and marketing manager of EHHS. She said that she’s eager to see the college, which has been her home since she started working at Kent State, continue to grow.

“Our program areas range in so many different fields,” Trapp said. “I just think we (EHHS) have a really rich history and we continue to grow over time.”