Dealing with the critters of Kent State 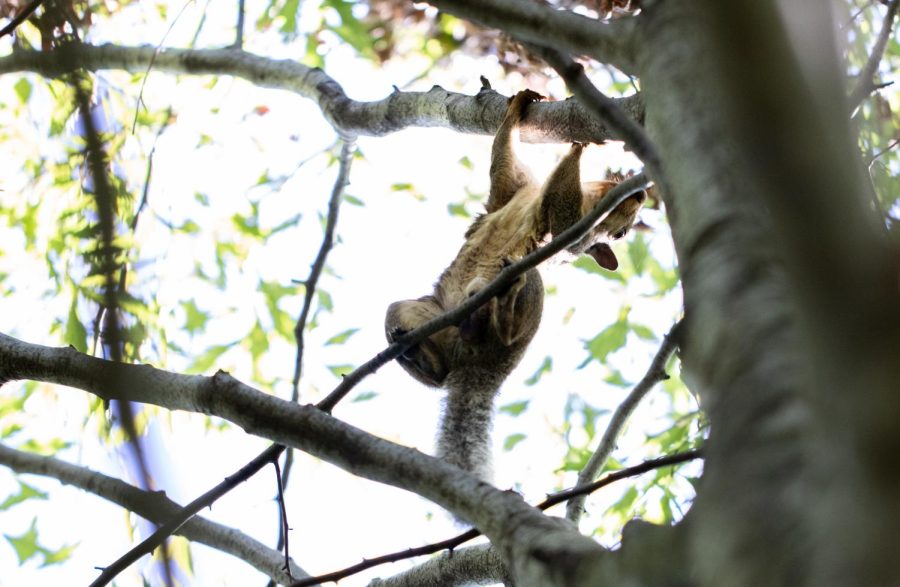 A squirrel climbs up a tree in the green space outside Franklin Hall on August 29, 2019.

The Kent State main campus is home to black squirrels, red-tailed hawks and other wildlife that can be a nuisance to students and groundskeepers. One of these creatures is the groundhog, which have spread to different areas around campus.

Grounds Manager Rebekkah Berryhill said there is no clear estimate of the number of groundhogs around campus. There is a possibility that the number may increase, because some of their main predators, coyotes, bobcats and foxes, are not in the area. However, red-tailed hawks pose a threat to groundhogs on campus, Berryhill said.

“On campus, we have a decent population of red-tailed hawks, and I have seen a circle of life happened when I’ve seen a baby groundhog picked up by a red-tailed hawk,” Berryhill said.

Groundhogs are not limited in where they build their homes, Berryhill said.

“They may choose to have their homes on warmer grounds but that’s not the rule,” Berryhill said. “They will go anywhere that they feel it is a good spot and close to some of the fruit that they would like to eat.”

This may not be the only reason why groundhogs are seen more frequently. Kristen Beck, director of Clover Field Wildlife Care, said that groundhog babies can still be living with their mothers.

“Groundhogs have a natural distribution process,” Beck said. “They live with their mothers for a while then when she kind of has enough, she sends them away, just like humans.”

Groundhogs are often viewed as nuisance animals because of the damages they cause to their environments. Berryhill said groundhogs have created problems with plant material on campus.

“We do see a lot of damage as far as plant material loss,” Berryhill said. “We may spend thousands of dollars to try to bring big beautiful flowers, and we can lose hundreds of dollars each night if a groundhog identifies a plant that they actually like to eat.”

Groundhogs dig burrows with several rooms under the ground. Each hole can be eight to 12 inches in size, with a whole tunnel system that runs from one hole to another. Other animals that can’t dig, such as squirrels, rabbits and opossums, can use these burrows to find warmth in the winter.

Groundhogs also can be aggressive if they feel scared or threatened by others. When they bite, their teeth can leave severe marks. An untreated groundhog’s bite can transmit rabies, according to Critter Control.

“Mothers can become brutal when they are trying to defend their young, but you know what? We would be too,” Beck said.

However, groundhogs have not been causing many issues with students on campus, Berryhill said.

“So far, we have not had any incidents in terms of passing diseases to folks,” Berryhill said. “They are more afraid of us than we are of them.”

The grounds crews take action by spraying a non-toxic liquid to prevent groundhogs from causing severe damage to campus.

“Basically, (the non-toxic liquid) is the urine of coyotes or foxes, which is a terrible smell for people and the groundhogs, but we try to deter them from the spaces,” Berryhill said.

Trapping and relocating groundhogs is another option, Beck said, but it is not the most effective solution.

“When an established animal is removed from an area, that leaves vacancy even if it opens up a territory, so it invites another animal,” Beck said.

Kitchen, who has worked with wild animals for more than 50 years, said that educating people about wildlife is the key to knowing how to deal with them.

“When the public encounters wild animals that they are not sure about, their actions are all fear-driven,” Beck said. “We need to take our time to talk to people and educate people and replace their fear with knowledge.”

Shams Mustafa is a general assignment reporter. Contact her at [email protected]