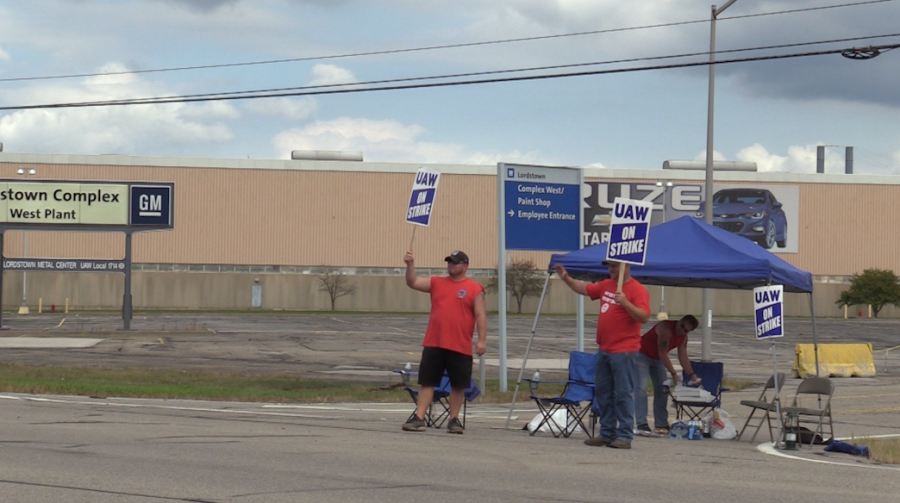 Members of the United Auto Workers Union Local 1112 strike outside of the Lordstown General Motors plant on September 16, 2019.

Dozens of United Auto Workers went on strike today outside of the Lordstown General Motors plant. Why are they there? Just ask picketer Jerry Wade, who said it’s “to try and get a fair and just contract.”

As Wade stood in the blistering heat with a picket sign, he said, “We’re here to get a just contract and get some cars back in this country. And if this means standing out here on the corner to do this, this is what we’re about. We gave so much to General Motors, it’s time for them to give us a little.”

Following the shutdown of the Lordstown plant in March of this year, hundreds of employees were forced to relocate to GM plants across the midwest. Union Local 1112 Vice President Bill Adams said the plant’s closure was nothing short of catastrophic.

Rain or shine, the workers said they plan to continue their strike until General Motors gives them the benefits they desire, including health care, fair pay, and job security.

Adams has one wish for union members nationwide: “That all the members are made whole from all the sacrifices we’ve had. To keep cities alive, communities alive, for the future. It’s not just about us, it’s the whole picture – not just here in Lordstown, but everywhere.”

Maddy Haberberger is a TV2 reporter. Contact her at [email protected]