‘I was non-stop Juuling up a storm’: 10 college students on their vaping addictions 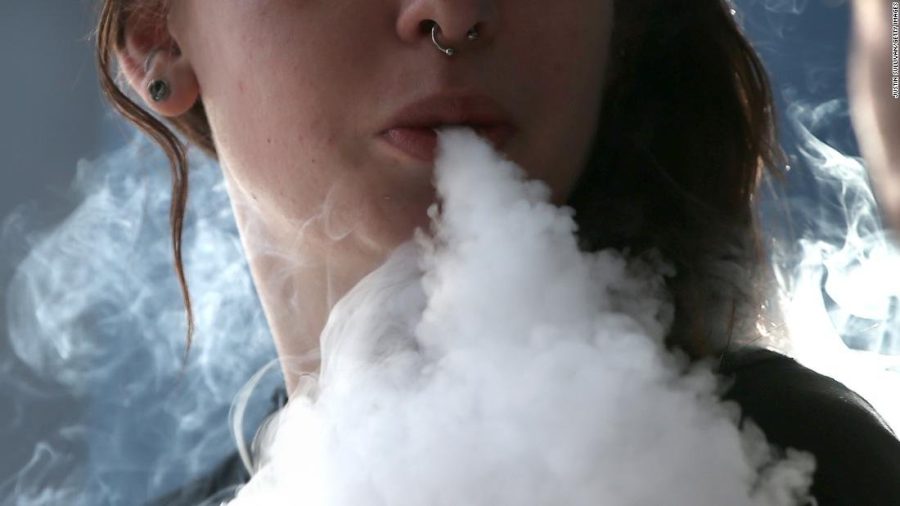 A sixth person in the United States has died from lung disease related to vaping, Kansas health officials said. The death marks the first in the state, but raises even more concern about the safety and regulation of e-cigarettes.

(CNN) — The CDC, FDA, White House and a who’s who of officials in suits want young people to stop using e-cigarettes amid a mysterious outbreak of hundreds of vaping-related lung illnesses.

CNN went to New York City’s Washington Square Park to speak with young people who had or currently have a vaping habit in order to understand their experiences, thoughts and reactions to the recent health warnings.

The conversations — all with college students between 18 and 21 — give a look into how the nicotine-addicted are dealing with two intertwined public health crises: an epidemic of youth vaping and the outbreak of serious lung illnesses.

‘I was non-stop Juuling up a storm’

Sydney Kinsey, a 21-year-old NYU student, started smoking cigarettes while abroad in London, and her habit intensified on a semester abroad in Buenos Aires, Argentina. So to quench her nicotine addiction, she got a Juul in June. A Juul is an e-cigarette device, slightly smaller than a pen, that uses pods filled with nicotine in liquid form.

She initially liked that it was convenient and kept her from smelling like cigarette smoke. But she started feeling worse about her usev recently.

“I could tell that it was making me feel worse body-wise, head-wise. I was getting a lot more anxious, but then also my joints and my lungs hurt more,” she said. “I was using it way more than I ever used (cigarettes). Like instead of going out and smoking like a cigarette a day, I was like non-stop Juuling up a storm, which is not fun.”

Juuling was expensive, she said, and she started seeing news about deaths from vape-related illness and reading about Juul’s questionable marketing practices.

So she quit about a week ago, tossing her Juul in a city trash can so she wouldn’t change her mind. She said she misses it.

“It’s like my phone. It’s the same addictive quality as my phone, as like I just expect to have it in my pocket, and I miss having it in a pocket to do something with,” she said.

‘You can feel that it’s hurting your lungs’

Investigators aren’t exactly sure what’s causing these vaping-related lung illnesses. But the US Centers for Disease Control and Prevention has said all the cases reported using e-cigarettes and some have reported a history of vaping THC, the psychoactive compound in marijuana.

That’s not much of a surprise to Laura Kesnig, 21.

She began vaping black market THC cartridges while attending The New School in New York, and she knew those weren’t good for her.

“You’re buying them illegally, so who knows what’s being put in them,” she said. “It’s funny because when you hit it, you can feel that it’s hurting your lungs. It doesn’t feel like hitting a joint or hitting anything. It hurts you.

“But we just told ourselves for so long that it’s fine, it’ll be fine, it’s weed, it can’t hurt you. And then this stuff comes out and it’s like, we knew this all along.”

Kesnig said she started smoking marijuana at about 15 but moved to vaping THC because of its ease.

“Those were just so easy,” she said. “You don’t have to do anything. You just buy it and then you just hit it, and it’s so easy.”

The ease of vaping, compared to lighting up a joint, made it more addicting for her, and she could feel her concentration going down from using it so often. She finished her last THC cartridge last week and has gone back to smoking “good, old, regular weed,” she said.

Brooklyn Johnson’s whole family smokes cigarettes, but tobacco has never had much appeal for her.

Instead, the 20-year-old NYU student bought a Juul this summer on a whim and now vapes about a pod a week.

“I just had the idea in the back of my head for like two years, and then this summer I was like, whatever man, I’m just gonna do it,” she said. “It wasn’t really like a big deal, I guess. I was just like, I know it’s bad, I probably shouldn’t, and then I just gave in.”

She was nonchalant about vaping, saying it was just something to do.

“(It’s) something to have in my hand and to be doing. There’s a head rush but it’s more of like an activity than like a way it makes me feel,” she said. “If I’m watching TV, I’ll be Juuling.”

After reading news about the vaping-related lung illnesses, she said she has thought to herself that she should probably quit.

“I still haven’t. I don’t know,” she said. “This sounds morbid, but I think there are more likely ways for me to die than by Juuling.”

‘I got pretty into it’

Juul Labs says its product “has always only been intended to be a viable alternative for the one billion current adult smokers in the world.”

Still, Ethan Uno first tried a friend’s Juul at a party when he was 17, and he got hooked after just one night.

“By the end of the night, I loved it, how it felt, the nicotine high,” he said. “I got one the next day and I got pretty into it.”

Uno, a 20-year-old from San Diego, California, knew it wasn’t good for him. But it was so accessible.

“You could literally do it at any point in the day, like while you’re doing homework. So it was so easy in that sense,” he said.

He vaped consistently for about six months, but then only sporadically after that. He hasn’t touched nicotine in over a year, he said, a decision he made partly out of concern that it would hurt his health.

“I kind of figured that would come up, just the fact that it’s un-experimented. And that’s kind of what subconsciously pushed me away from it,” he said.

The medical cases of vaping-related lung illness have been personal for him. He said a friend’s little brother was hospitalized with a lung issue that was most likely caused by vaping.

‘It sounds awful, telling myself all this’

“Sam,” an NYU student who declined to give his real name, began smoking cigarettes when he was in the military in Singapore, and he started vaping to cut back on his cigarette use.

“(It’s) pretty identical to me as cigarettes, except it doesn’t come with the smell or the stigma,” he said. “Now obviously that has changed to the point where there is now a stigma against it, too.”

He said he is off cigarettes now. He knows vaping isn’t ideal but he can’t quite quit it; he tried to do so cold turkey last year, but the nicotine withdrawal gave him headaches and made him irritable.

“You definitely feel it in your throat. You feel the physiological craving of it, in my opinion,” he said.

He now uses a “lush ice”-flavored Stig, a disposable e-cigarette. As he skillfully played with the Stig in his fingers, Sam listed off a series of reasons he continues to vape.

College is stressful. This is the lesser of two evils. He’s at a transient time in his life. It’s more affordable.

Then he stopped talking as he listened to his own words.

“It sounds awful, telling myself all this, right, like, actually vocalizing it,” he said.