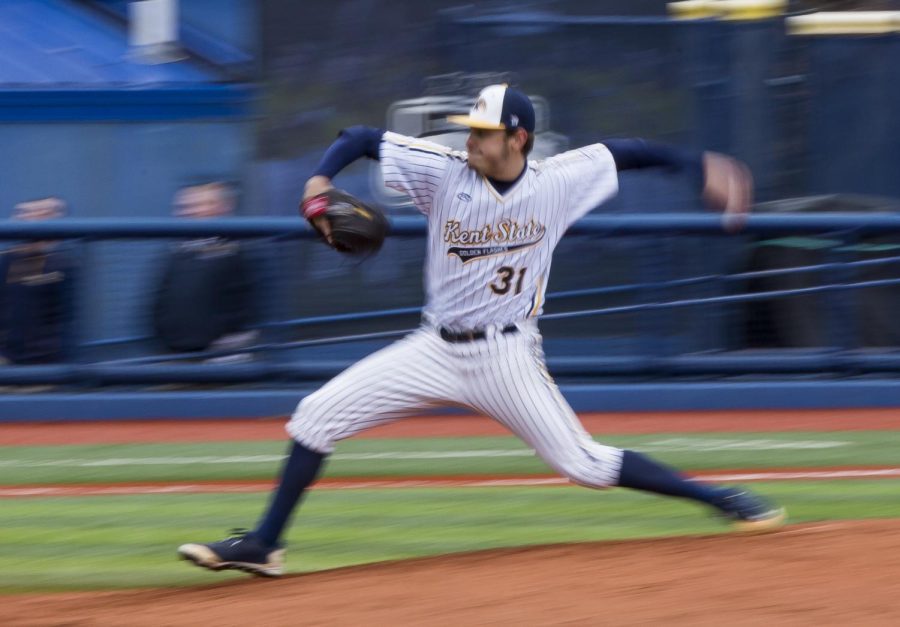 “When you come to Kent, you’re not going in to make huge mechanical changes or become a different pitcher,” said Kraus, who tied for the most wins ever by a Kent State career. “Birky makes it very clear to pitch the way that got you to Kent.”

Birkbeck, who’s coached at Kent State for 23 years, has produced seven major-league pitchers, 13 All-Americans, and 18 all-Mid American Conference Tournament players. He is one of the reasons as to how Kent State has been a dominant mid-major program for decades.

Kraus was selected in the 24th round of the MLB draft in 2018 and is in the St. Louis Cardinals organization.

“For the most part, you look at coaches as coaches,” Kraus said. “But with coach Birky, you looked at him as a family member. It was somebody that you respected and were respected by.”

Birkback was pitching in Japan in 1986 when he got the call that brought him to Kent State.

“My first thought for someone to replace Schoonie was Mike,” said Rick Rembielak, the Flashes’ head coach then. “It was a no brainer on my part. So I just contacted him right away.”

The call, Birkbeck, came “out of the blue.”

“At the time, I wasn’t fully convinced I wanted to continue my playing career,” Birkbeck said. “So we sat down and talked about it. It was something that intrigued me, and that’s how it all came about.”

Former Kent State starter Connor Wollersheim said Birkbeck changed him as a person and a player.

“He is one of the most influential coaches I have had,” Wollersheim said. “He developed me from being a kid that just kind of threw the ball to actually learning how to pitch. He understands the game well and understands what you need to do with each person, knowing that everyone’s not the same, and something different is going to work for a different person.”

Wollersheim said Birkbeck guided him in learning different pitches and understanding certain situations he could be put under as a pitcher.

Birkbeck understands how different pitchers can be when it comes to a new environment at the college level.

“I have spent my life around baseball,” Birkbeck said. “It is a great game to teach life lessons and these guys. They all have wants and aspirations, and to be able to be in a situation where you can hopefully help them achieve is very fulfilling.”

Birkbeck has sought relationships with the family members of the players.

“He meant a lot to me, but my family too,” Kraus said. “I wouldn’t be where I am today had it not been for Birkbeck. My sophomore year, we had some guys go down and couldn’t play. I was given the opportunity to be a weekend starter, and coach Birkbeck believed in me to make the most of the opportunity. Had it not been for his trust and belief, I don’t know if I would’ve been successful. Now I am where I am and I owe a lot of it to him.”

Each season Birkbeck deals with around 12 to 13 pitchers on the staff. Birkbeck knows each pitcher is different.

“It takes time to develop a relationship and get to know them and what gets each individual to click,” Birkbeck said. “We try to bring out their strengths as individuals. Instead of trying to do every player the same way, we try to get each individual to maximize their own potential. If you can do that collectively, you have a chance to have a special pitching staff.”

When current head coach Jeff Duncan arrived at Kent State in 2013, he relied on Birkbeck to get used to the environment.

“Birkbeck taught me a lot about the program and the history of the program,” said Duncan, who had been associate head coach at Purdue. “He is very loyal to this program and to me, which I appreciate. He brings instant credibility with his experience and has been a really good teacher and coach, not only on the pitching side, but as a whole in the game of baseball.”

“Unequivocally, their decision on coming to Kent State was because of Birkbeck,” Rembielak said. “Birky was the one that sold them on the program. Every kid that came in and listened to him and did what he instructed them to do, developed in their career.”

“He understands that 18 to 22 years olds are still learning to be functioning member of society,” Kraus said. “He just understands what we are going through. There’s nothing you can’t talk to coach Birky about. Coach Birky and Kent State really set us up for life in baseball and life after baseball.”

Over the past 23 years, Birkbeck has offered his support to many players that have come through the program, leaving a mark that will stay forever.

“Kent State has done a lot for me and my family,” Birkbeck said. “My wife graduated here, my son graduated here and I’ve been working for 23 years. It’s a really special place and it means a lot to me.”

John Conley is a sports reporter. Contact him at [email protected]