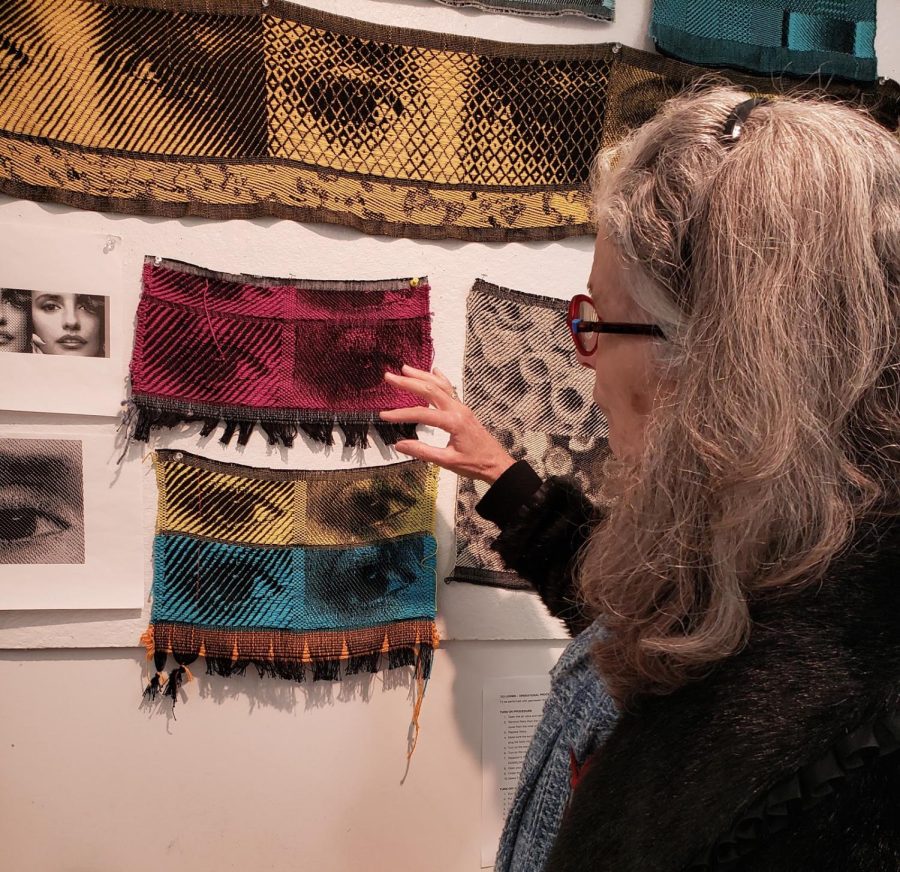 Janice Lessman-Moss, professor of textiles in the School of Art, looks at students' work.

It was the early 1980s, and Pittsburgh native Janice Lessman-Moss had just signed on as a professor with the Kent State School of Visual Arts. She was doing what she loved and working with a medium she loved: textiles.

Lessman-Moss discovered her passion for textiles as an undergraduate student at Temple University. While there, she learned to view textiles as an artistic medium rather than just an article of clothing. It was as if a switch went off in her head, helping her realize art was her calling.

“I fell in love,” Lessman-Moss said. “I felt a great connection to the language of weaving and I liked the metaphorical kind of relationships of the processes, the actual physical engagement with the materials. It just opened up a whole new world for me.”

This new world opened up a career path for the emerging artist. Coming to work each day doesn’t feel like a chore, she said, and it is something she takes pleasure in. Lessman-Moss’ graduate students, Diana Pemberton and Meagan Smith, speak highly of her no-nonsense teaching approach.

“I really liked her level of professionalism,” Pemberton said. “She now has a high bar for seniors, and it can seem a little intimidating, but I think helped me grow as a professional individual. She’s very supportive, and she pushes you. I think that’s good because then you hold yourself accountable.”

As the 2019 recipient of the Cleveland Arts Prize Lifetime Achievement Award, Lessman-Moss said she is humbled to be honored by others in her field and is still reeling from the news of being acknowledged.

“It’s one of those things where there have been some wonderful artists who have received this award before me, and sometimes it’s hard to believe that now I’m part of that group of recognized individuals,” Lessman-Moss said.

Smith agrees with her professor’s sentiments about the recognition.

“(The Lifetime Achievement Award) was very well deserved,” Smith said. “Janice is very dedicated and driven, a strong personality, and for her to be a female and so well-known and accomplished in her field is exciting. It’s really exciting to work with someone who’s an advocate for I would say an (underrated) art form in the field of fine arts.”

Janice Lessman-Moss will be awarded the Lifetime Achievement Award by the Cleveland Arts Prize at the Cleveland Museum of Art on Wednesday, Sept. 25.

Hannah Davis is a features writer. Contact her at [email protected]