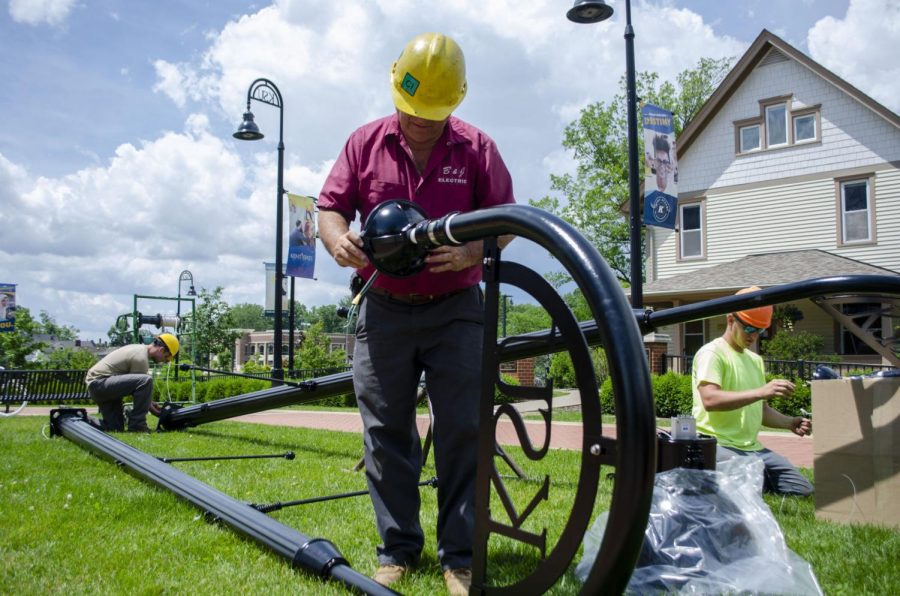 Nick Ramsey (left), Fred Lyda (center) and Gene Mock (right) all work on the new KSU lamps that will light the South Lincoln Street crosswalk by the Architecture Building.

Kent State and the city of Kent added new streetlights in June at the Lester A. Lefton Esplanade crossings of South Willow and South Lincoln Streets due to concerns for pedestrian safety.

With these changes, it creates consistent lighting along the Esplanade, said Michael Bruder, executive director of Kent State’s Facilities Planning and Operations.

The Trail Crossing Lighting Agreement cited increased pedestrian movement in the area as the reason for more lighting. The safety of the area was a mutual concern of both the university and the city, Bruder said.

“We had people calling in, saying it was too dark in that area,” said Jim Bowling, Kent’s superintendent of engineering and deputy service director. “This [project] serves visitors, Kent residents, students and faculty.”

There was a noticeable increase in traffic after the architecture building was built and opened in 2016, Bowling said. In January 2018, a pedestrian was hit at night near the Lincoln Street Esplanade crossing.

Stop signs were discussed as a possible solution for the safety concerns at the crossing. However, research on the crossing did not support using them, according to Council Agenda Packet of the Kent City Council Meeting in December 2018.

A resolution for the project was signed and passed at a Kent City Council meeting in November 2018. The university and the city agreed to each pay $50,000. The university made the down payment on the streetlights, oversaw their placement and maintains them.

The placement started after the Spring 2019 semester ended to minimize the disruption of traffic, Bruder said.

The streetlights will be connected to the university’s electrical system because it is the most cost-effective option, Bowling said.