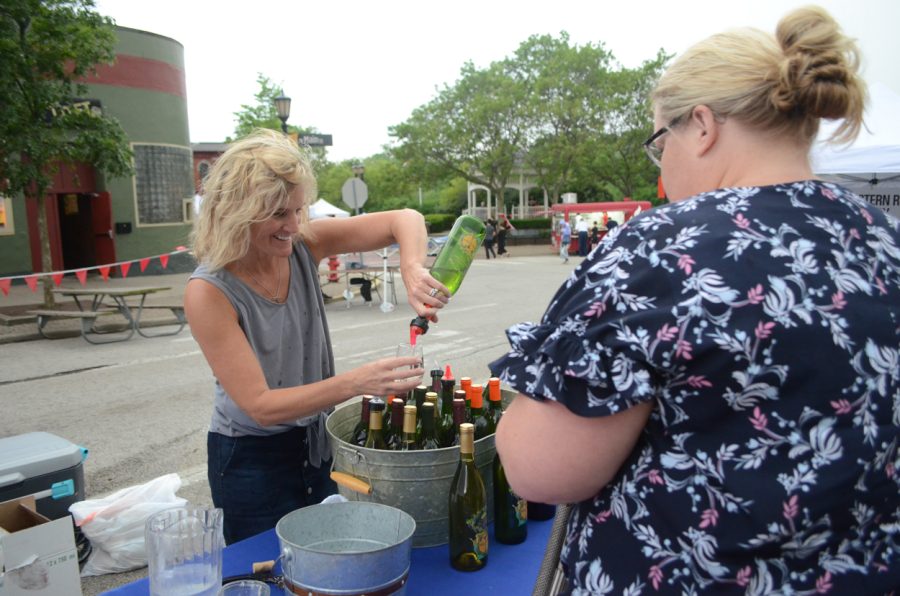 Art and community were brought together at the 13th annual Art and Wine Festival in downtown Kent on Saturday.

Featured artist Todd Hiney is a lifelong animal lover. He adopted his own dog, a Brittany Spaniel, and used to volunteer with his wife at his local animal shelter.

“We had to stop, or we would keep adopting dogs and have too many,” Hiney said.

Hiney has been drawing his entire life and worked at an art studio in Kent during the 1990s. By combining his passion for both art and animals into animal portraits, Hiney took home the third place prize at the festival art contest.

Hiney worked at the Loft Tavern downtown during his time in Kent with George Coghill.

As a child, Coghill drew monsters and aliens; however, he put that away when he came to Kent State in the 1990s to pursue a degree in fine art.

“I felt I needed to do more serious work to truly be an artist with a capital ‘A,’” Coghill said.

After graduating from college and working freelance, Coghill decided to go back to drawing monsters and aliens.

In 2014, Coghill posted a drawing of a design for a patch with Bigfoot on it, with the words “Bigfoot Patrol,” on Facebook. Coghill’s friends then convinced him to make patches with his designs.

Coghill received funding for his project through a Kickstarter campaign online.

With his business “Monsterologist,” Coghill designs and places iconic monsters and science fiction staples on patches, pins, pictures and shirts, including Bigfoot, the Mothman and Yetis.

Not only can Coghill draw monsters, but he knows the legends behind them too.

Both Hiney and Coghill worked at the Loft with another artist at the festival in the 1990s, Rachel Jernigan, who won second place at the festival’s art contest.

Art runs in Jernigan’s family. Her father and sister were both artists. Following their lead, she drew often as a child and graduated from Kent State with a degree in ceramics.

Jernigan began painting after college because she said it took up less space than ceramic work. At the show, she presented paintings with acrylic paint on wood, creating a “retro aesthetic.”

All the artists featured in the festival had a connection to the Kent area. To the artists, Kent has been a place where they can freely express themselves through art.

“You can feel comfortable with yourself in this town,” artist Scott Ward said.

Ward got first-place in the festival’s contest, with his hand-made, decorated pots and bowls.

“The entertainment, featured artists and wineries are different every year…” Malarcik said. “Our artists bring a broad range of styles and types of work to the event, and it’s always a great mix.”