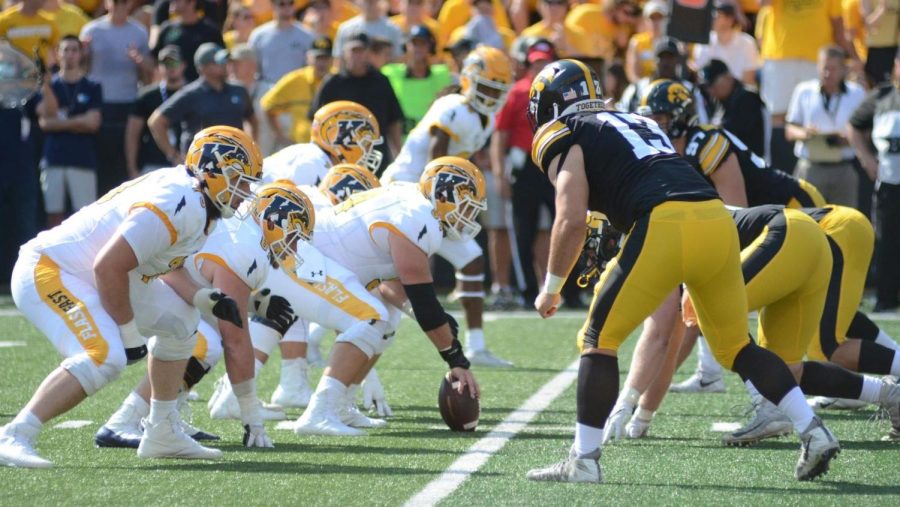 Kent State center Sam Allan (54) prepares to snap the ball while facing down Iowa's defensive line. The Flashes would give up 7 sacks for 39 yards and a safety.

For the second time in three weeks, the Kent State football team found itself in a position to make it a one score game in the second half while facing a top six team in the country.

It was 1st & goal, and the Flashes were on the one-yard line with just under seven minutes left in the third quarter. A touchdown would put KSU within three points of No. 5 University of Iowa, pending the extra point.

Quarterback Dustin Crum took the snap in the shotgun and handed off to sophomore Bryan Bradford, who plowed forward but was stuffed at the goal line. As he was pushed backwards and was falling to the ground, Bradford reached out in an attempt to get the ball into the end zone. The ball flew out of his hands and was quickly picked up by an Iowa defender.

The Hawkeyes would drive 80 yards down the field, capped off by a 35-yard touchdown run by junior running back Tyler Goodson.

That drive seemed to close the door on KSU, and the Flashes would lose 30-7. Kent State falls to 1-2 while Iowa improves to 3-0. Iowa’s other wins were against No. 17 Indiana and No. 9 Iowa State.

“When you’re playing a top-five team like Iowa, we have to control the controllables,” Lewis said. “And we have to eliminate bad football. When you have turnovers in those critical situations, then you’re not giving yourself a chance to win.”

“We gotta do a better job finishing when the opportunity is there and is presented to us,” Lewis said. “We need to have a greater attention to detail so when the moments come, we can seize them.”

Two weeks after an impressive first half against No. 6 Texas A&M, where the Flashes were down 10-3 at halftime, the game against Iowa seemed even closer.

Early in the first quarter, the Flashes faced 3rd & three on their own 15-yard line. Graduate student center Sam Allan, who was making his second consecutive start in place of redshirt sophomore Jack Bailey, snapped the ball over the head of Crum and into the end zone. Crum recovered the ball, but was tackled in the end zone for a safety.

After the free kick, Goodson scored on a 46-yard touchdown run to put Iowa up 9-0 quickly. Goodson was the engine of Iowa’s offense, racking up 153 yards and three touchdowns.

The Flashes responded quickly, driving 75 yards and scoring on a 23-yard touchdown pass to fifth-year wide receiver Keshunn Abram. He helped the Flashes get deep into Hawkeyes’ territory with his 48-yard reception on the same drive.

In addition to his score, Abram had 138 receiving yards on six receptions. That’s more yards than his last two seasons combined.

“[Abram] continues to get better and better,” Lewis said. “Opportunities presented themselves, and he capitalized on them. We’re really pleased with his overall growth and his overall effort.”

Abram gave kudos to his teammates for his performance.

“I give all thanks to my line and to Dustin Crum for making the right passes,” Abram said. “Just the preparation, we are prepared for the moment and just executing.”

The Iowa secondary was second in the country in total interceptions with three in each of their previous two games. They have 70 interceptions since 2017, the most in the NCAA.

Hawkeyes’ senior cornerback Riley Moss covered Abram for much of the game. Moss was named the Big Ten’s Defensive Player of the Week in Iowa’s season opening win against Indiana. Moss had two pick sixes and two pass breakups in that game.

“[Moss] was just sitting in there and I took advantage of him,” Abram said. “He was not respecting the deep route.”

Crum completed 16 of his 23 passes for 185 yards and one touchdown. However, he was sacked seven times and had no success in the run game with -22 yards on 12 attempts.

“[Crum] did some good things,” Lewis said. “But, I think he’d be the first to tell you that he’d like to be more consistent in his effort so we can have higher execution.”

After Abram’s touchdown, Iowa drove deep into KSU territory. That’s where the Flashes defense, who came into this game leading the country in takeaways with nine, stepped up.

“[Miller] does the dirty work,” Lewis said. “He’s willing to get in there and mix it up. He’s a physical corner and he’s embodied those traits all year.”

Miller was named the Mid-American Conference East Divison Co-Defensive Player of the Week for his performance last week against the Virginia Military Institute.

The Flashes were unable to capitalize on the turnover however, and punted the ball away.

After a Hawkeyes’ punt and a stalled drive by KSU, freshman punter Josh Smith pinned Iowa at the five-yard-line.

The Hawkeyes would go 95 yards and take up over eight minutes of clock on a drive that ended with a five-yard touchdown pass from junior quarterback Spencer Petras to junior tight end Sam LaPorta.

Lewis said instances like that can take a lot out of your defense.

“Anytime you have extended drives like that, there’s going to be some effect of that,” he said. “I think we do a great job rolling personnel on our defensive side, and the competitive depth we have allows guys to play so we can keep our guys as fresh as possible.”

The Flashes’ rushing attack came into the game averaging 360 yards per game. Last week against VMI, they rushed for the most rushing yards as a program since 1954 with 494.

Against Iowa, the Flashes had just 79 rushing yards, their lowest total since October 2019.

“We need to be more consistent with how we’re identifying the fronts and with our techniques and fundamentals,” Lewis said. “Iowa won some one-on-ones up front, I’m not gonna make a mountain out of a molehill against a defense that is one of the best in the country.”

Sophomore running back Marquez Cooper led the backs with 38 yards on 10 carries.

Despite the performance, KSU still leads the MAC in rushing yards per game with 266.3.