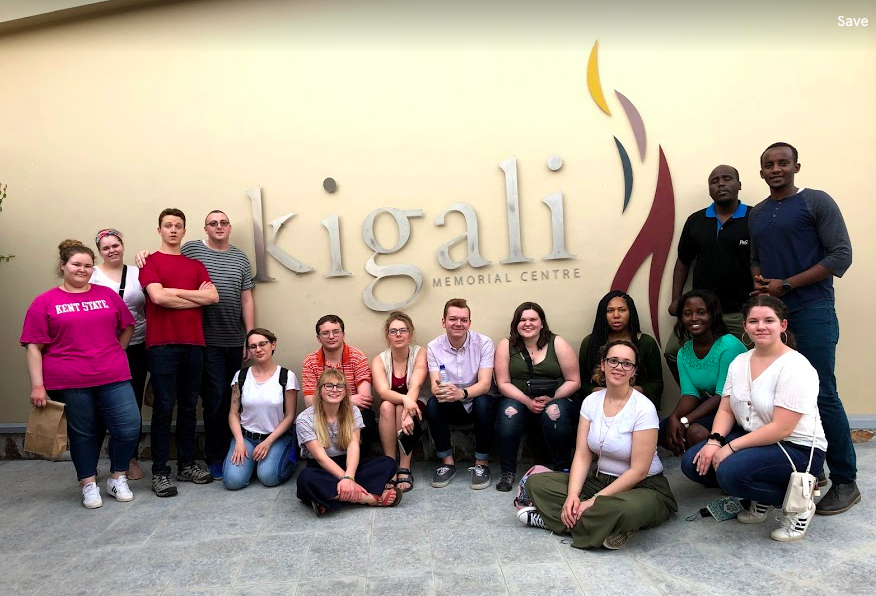 Students and faculty pose in front of the Kigali Genocide Memorial.

The trip served as an opportunity for students to visit the sight of a once catastrophic massacre in hopes to educate about the past while also admiring the plans for the future.

The travelers found home in a local village at a former orphanage which was used during the conflict.

“In this particular case, this isn’t a part of the world that a lot of people have been to, and there are a lot of stereotypes,” Heaphy said. “So, my hope was that the students would come back as ambassadors for Rwanda to help others learn more about the history.”

While this trip was centered around an extremely devastating topic, a recurring theme was the amount of love, respect and unity the community of Rwanda shared with one another and with visitors.

“When we went over, we were welcomed with open arms,” said Landon Ellis, a sophomore criminal justice student. “Everyone was so friendly and treated us pretty much like brothers and sisters—which is something I wish people in the United States had more of.”

The students constructed a blog everyday, as well as a google photo album to document their every move.

The main purpose of the trip was to visit the Kigali Genocide Memorial, which is the burial site for over 259,000 victims. The students and faculty heard from a survivor of the genocide who told personal stories of struggle and despair during and after reconstruction.

“It’s just hard to grasp the fact that 25 years ago, 10 percent of the population was decimated and the country was in ruins,” Isabelle Cullen, a freshman nursing major, said. “I don’t think anything could prepare you to see a mass grave of 250,000 people, or skulls with machete marks, or a pair of baby shoes with blood splatter on them.”

Despite the severity of the country’s situation, the group and Rwanda natives were able to get to know one another.

“This was the 48th country I’ve been to,” Schmidt said. “I’ve never been to a more collective, cohesive society. Everyone wants peace and happiness.”

Ellie is the regionals reporter. Contact her at [email protected]