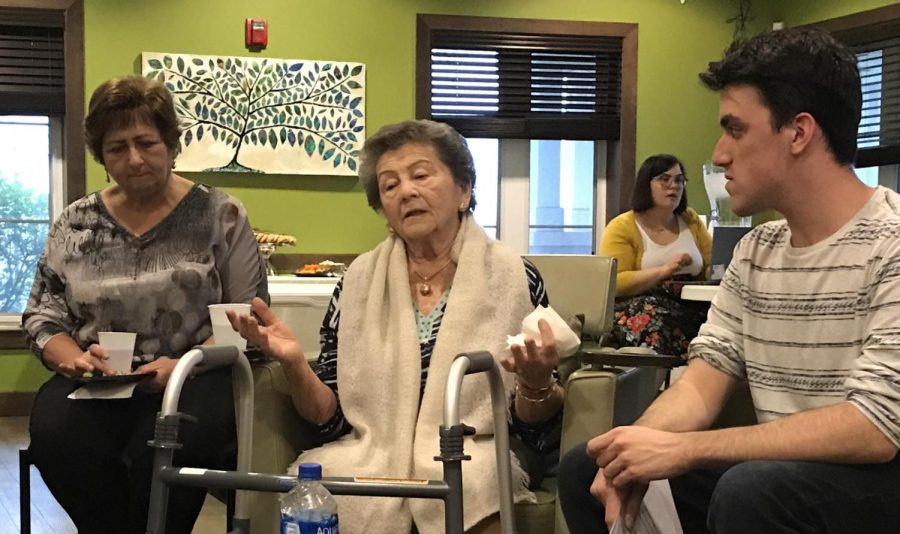 Olga Goldstein tells her story of surviving the Holocaust at the Hillel Jewish Student Center in Kent Tuesday, April 30, 2019.

“50 years from now, somebody will say this was all a story,” Olga Goldstein told those listening closely around her. “Please, do not forget that you met me.”

May 1 is Israeli Holocaust Memorial Day. On that day, the annual event Zikaron BaSalon takes place, which is Hebrew for “Remembering in the Living Room.” To commemorate this, the 90-year-old Goldstein, bearing a numbered tattoo on her arm entered the Hillel Jewish Student Center on Wednesday with a walker and a smile. She sat down, introduced herself and began to tell the her story.

Goldstein was born in 1929 in the Romanian city of Transylvania. She is Jewish, as were about 8,000 others in the city of 50,000. She was very young when she first had the Star of David sewn to her clothes. This meant she was now unable to go to school.

She wasn’t much older when she was roused from her sleep at night by the loud voices coming from the front of her house. The Nazi operatives had her and her parents and siblings take only what they could fit in a small bag and transported them to the first destination on their horrible journey: the ghetto. Goldstein described the ghetto as a very old place. It had been a brick factory, but became a place to pack Jews into a small area in preparation for their next stop: the infamous Auschwitz concentration camp.

Goldstein remembers the first week in the form of screams and crying. It was all she could hear at times, and the cries were close. After all, the Jews and other people deemed “subhuman” by the Nazis were packed so close in their bunks that they were often touching.

It wasn’t very long before Goldstein came in contact with the “Angel of Death”, Dr. Josef Mengele, whose namesake derives from his historically cruel experiments on the Jews he had jurisdiction over. In fact, this was the man who took her mother away from her forever.

There were two stories the young Goldstein had been told about the fate of her mother that day. Some guards told her not to worry, as the older women were often sent to work in the kitchens. Some fellow Jews, however, directed her attention to the smoke-spewing chimneys, which she would later discover to be connected to the buildings where countless Jews were incinerated.

Time went by, and the war was taking a turn for the worse for the Nazis. When England was two kilometers away from reaching Goldstein, the Nazis marched 61,000 prisoners on a 16-day journey further inland. However, with the Allies’ bombers too high in the air to distinguish the Jews from Nazi soldiers, not many of them survived the bombardment.

It was at the end of this journey that Goldstein was finally freed. She had been working at a bread factory when one night she was roused from her sleep and told that the war had finally ended. Singing and dancing commenced, and they opened the food storages to feast on sugar and whatever else they could find. She reunited with her father and brothers, but never did see her mother again.

Even after she emigrated from Romania to attend medical school in Cleveland, she did not give up on finding her mother.

“I was hoping for a miracle, that I would find her,” Goldstein said. “That after all those years, I would see her again.”

Goldstein didn’t speak of her experiences in the Holocaust for 58 years after she escaped. It wasn’t until a friend’s daughter came to her and asked for her to tell her story so that she could write a report for school that she found it within herself to open up.

After revisiting her experiences and remembering the friends and family she lost, Goldstein says she has realized her obligation to tell her story, as one of the few Holocaust survivors still alive today. She looks back on her life with pride, and says that her greatest accomplishment is being alive after everything she went through.