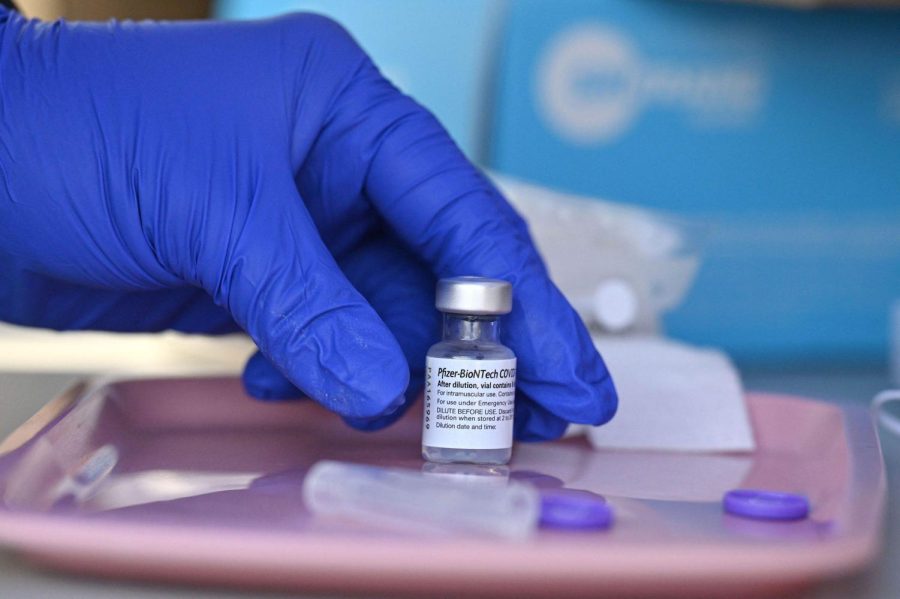 A nurse reaches for a vial of Pfizer-BioNTech Covid-19 vaccine at a pop up vaccine clinic in the Arleta neighborhood of Los Angeles, California, August 23, 2021. - The US Food and Drug Administration on August 23, fully approved the Pfizer-BioNTech Covid shot, triggering a new wave of vaccine mandates as the Delta variant batters the country. Around 52 percent of the American population is fully vaccinated, but health authorities have hit a wall of vaccine hesitant people, impeding the national campaign. (Photo by Robyn Beck / AFP) (Photo by ROBYN BECK/AFP via Getty Images)

(CNN) — Vaccine advisers to the US Food and Drug Administration voted unanimously Friday to recommend emergency use authorization of a booster dose of Pfizer’s vaccine six months after full vaccination in people 65 and older and those at high risk of severe Covid-19.

Members of the FDA’s Vaccines and Related Biological Products Advisory Committee also informally advised the FDA to include health care workers or others at high risk of Covid-19 exposure in the EUA.

Earlier, the advisers had rejected a broader application to approve the use of booster doses of Pfizer’s vaccines in everyone 16 and older six months after they are fully vaccinated.

Biden administration officials have previously announced a plan to begin administering booster doses to the general population during the week of September 20, pending signoff from the FDA and US Centers for Disease Control.

Some of the advisers — a group of vaccine experts, immunologists, pediatricians, infectious disease specialists and public health experts — have said the process was rushed because of that target date.

On Friday, several said they wanted to see more data, or they believed boosters were likely necessary, but for a more limited segment of the population.

“I don’t think a booster dose is going to significantly contribute to controlling the pandemic,” said Dr. Cody Meissner, a professor of pediatrics at Tufts University School of Medicine, said during the meeting.

“It is very important that the main message that we still transmit is that we have got to get everyone two doses. Everyone has got the get the primary series. This booster dose is not likely to make a big difference in the behavior of this pandemic.”

During the meeting, Dr. William Gruber, senior vice president of vaccine clinical research and development at Pfizer, said several studies indicate that people’s immunity can and does wane and that giving booster doses restores that immunity — sometimes to levels higher than seen at initial vaccination. He said people who got the boosters did not have any more side effects than seen after the first two doses.

And Gruber said while the two-dose Pfizer vaccine continues to protect well against severe infection, hospitalizations and deaths, there are hints that could change.

The company relied heavily on data from Israel, where vaccinated people started to get breakthrough infections. Israeli researchers earlier told the meeting that adding booster shots in Israel helped keep many people out of the hospital.

But FDA staff and advisers pushed back on the data available so far.

Dr. Phil Krause, deputy director of the FDA’s Office of Vaccines Research and Review, noted that Pfizer was using data that had not been reviewed by experts.

“One of the issues in this is that much of the data that’s been presented and being discussed today is not peer-reviewed and has not been reviewed by FDA,” Krause told the meeting of the Vaccines and Related Biological Products Advisory Committee.

Dr. Michael Kurilla, an infectious disease specialist at the National Center for Advancing Translational Sciences, noted that the studies relied heavily on measurements of antibodies, without looking at other important aspects of immune response.

“It’s a little disappointing that there’s been very little reporting of the cellular immune responses and an entire focus on the neutralizing antisera,” Kurilla said. “Which clearly for that population at high risk is absolutely essential, but for the broad population in terms of their protection, which seems to be holding up well over time — (that) should be because of adequate cellular immune responses but we have no indication of that.

“So it’s unclear that everyone needs to be boosted, other than a subset of the population that clearly would be at high risk for serious disease.”

Pfizer received full approval for its vaccine from the FDA, so the request to add a booster dose is a supplement to that approval. Pfizer — and other researchers — say their studies show people develop strong immunity after two doses of vaccine, but that levels of antibodies start to drop after a few months.

The FDA noted in its briefing documents that Pfizer’s vaccine — as well as vaccines made by Moderna and Johnson & Johnson — still provide strong protection against severe disease, hospitalization and death, even if antibodies do wane over time.

After the FDA advisory committee makes its recommendation, the FDA makes the decision about whether to approve the booster dose.

The CDC has scheduled a meeting of its vaccine advisers for September 22 and 23 — and CDC must give its stamp of approval for any booster doses to be officially given. In a letter sent Thursday and obtained by CNN, the CDC urged local and state health officials to wait to administer boosters until both agencies had signed off.

Third doses are already approved for certain immunocompromised people, but not for the general public.