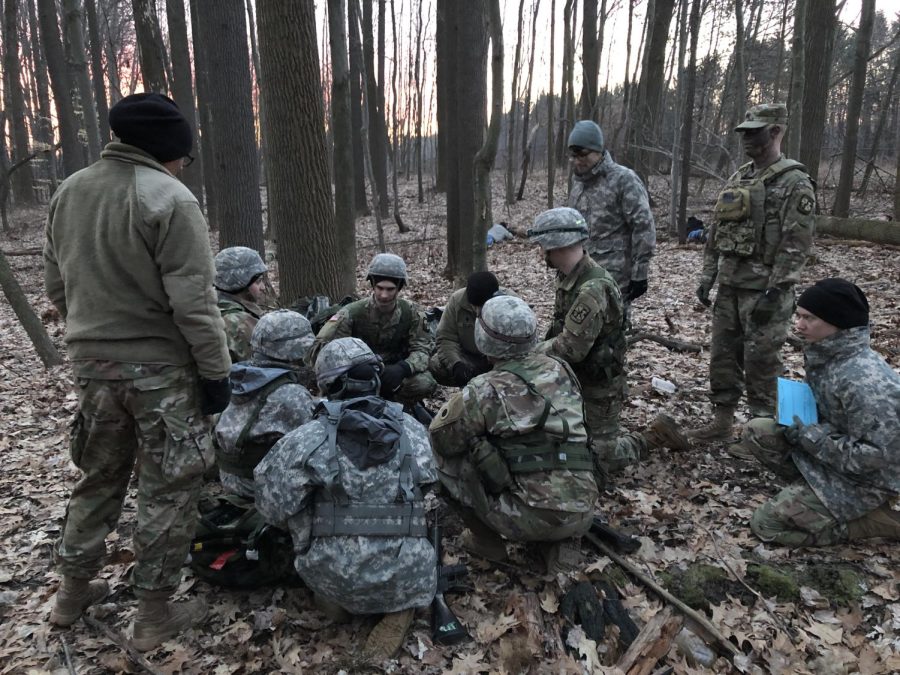 Cadets discuss their mission in the woods by Allerton Sports Complex as they train for Advanced Camp.

Kent State’s Army ROTC cadets prepared for their 31-day-long training camp, Advanced Camp, in the woods by Allerton Sports Complex every week during March despite the cold weather.

MS3, or Military Science Three, cadets will head to Advanced Camp at Fort Knox in Kentucky this summer for a month where they will be assessed on their leadership ability when working with cadets from universities across the county.

“It’s a measure of their skills as a platoon leader or platoon sergeant or squad leader,” said Cadet Jared Howard, a senior public health major. “It’s essentially an evaluation of leadership skills they have accumulated over the past few years here at ROTC.”

Cadets spent each Wednesday in March in the woods near Allerton practicing these skills and tasks to make them more prepared for what they would be completing at Advanced Camp.

“It’s good for them to come out here because they get hands-on, tested experience,” said Cadet Jonah Kearns, a senior aeronautics major.

The practice they complete at Allerton gives them an initial practice stage of what training and grading will look like at Advanced Camp.

“I think that practicing at Allerton is preparing us by giving us a glimpse into what we need to work on,” said Cadet Isaac Zeigler, an MS3 cadet and senior political science major, who will be heading to Advanced Camp this summer.

The cadets were split into two platoons, around 15 to 20 students each, at Allerton to practice teamwork and leadership while planning missions and attacks on each other. Each platoon had a leader and sergeant who planned the mission. The platoons were also divided into a few squads, around five cadets each, with a squad leader. The squad leader informed his or her squad of the planned mission.

“Conducting missions in a platoon provides more leadership opportunities for MS3s,” Stephenson said, “as well as increases the difficulty of the mission due to the increased number of cadets in the unit and a larger sized enemy force to fight.”

Throughout the school year and over their time in ROTC, cadets have been practicing and preparing for planning these missions.

The ROTC program and the Army complete their training and practices in phases, which typically include a crawl, walk and run phase, Kearns said.

“Allerton training is the crawl phase for the MS3s,” Stephenson said. “They are shorter, less complex missions with limited resources. The environment is also less stressful.”

The training the cadets completed at Camp James A. Garfield was the walk phase because the missions were longer, conducted in a larger and unfamiliar area and have more cadets and equipment to keep track of.

“Advanced Camp is the run phase,” Stephenson said. “Cadets must hone their skills they have learned the past three years and take off full speed to accomplish anything in their way.”

Cadets said Advanced Camp can be a tough experience mentally and physically because it consists of spending a month in the woods and working with new cadets from other universities.

“I think adjusting to life at Fort Knox will be the most challenging part and fitting in with other cadets,” Zeigler said.

The training at Advanced Camp is “complex, challenging and rigorous and is conducted in a stressful training environment,” according to the United States Army Cadet Command’s website. “Advanced Camp best taught me how to keep a high level of motivation and morale during long-term periods of discomfort, unfavorable conditions and challenging/stressful periods,” Stephenson said. “It also better taught me to not always attempt to go into something 100% according to doctrine. You have to know exactly what doctrine is before you do it differently, but a leader can change things up if their mission success depends on it.”

Cadets are evaluated throughout their time training at Advanced Camp and then ranked, which will determine what job they will get after graduation and if they are able to commission, which is why getting through the tough training at camp is important.

“I think the most important skill Advance Camp will teach me will be how to work with and lead my peers,” Zeigler said. “It feels real to me because it is what I want to do in the Army. I want to lead troops out in the field and use that tactics I am learning in the future.”