Welcome to Ray’s Place: the ‘heart of downtown’ 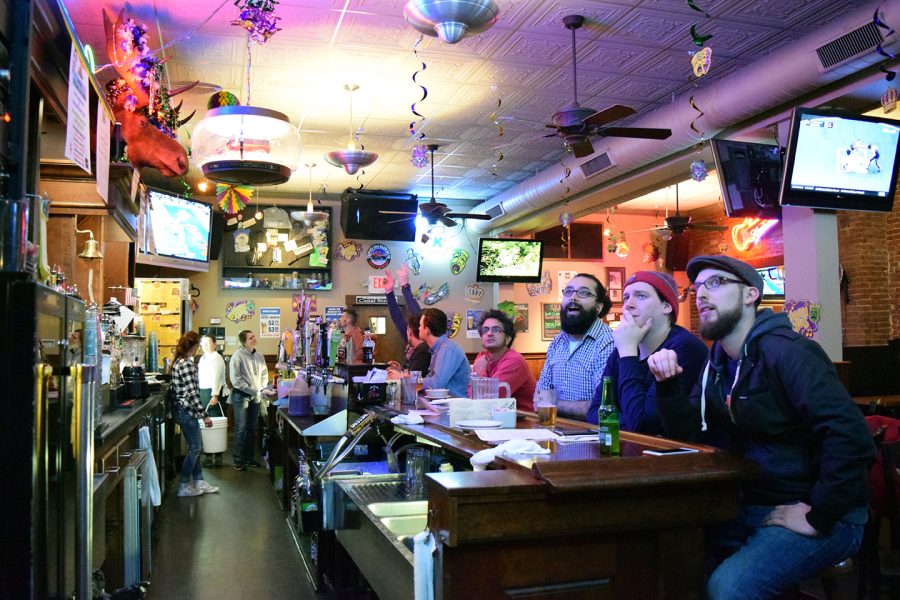 If you’ve spent any length of time in Kent, it should come as no surprise that Ray’s Place dominated Best of Kent’s restaurant categories with four big wins, including Best Restaurant, Best Burger, Best Alcoholic Drink, and Best Place to Take Your Family to Eat. The famous downtown bar has taken that prize five of the past six years.

It should also come as no surprise that owner Charlie Thomas is a popular man. Walking through the restaurant on a rainy Monday afternoon, he is recognized instantly by two longtime customers.

“Thanks, wanna buy one?” he replies, laughing.

That familiarity and friendliness has built Ray’s into a local cornerstone since its founding in 1937. Thomas credits the bar’s success to the care everyone is given there, from the customers to the employees and even the building itself.

Thomas is the fourth owner in Ray’s Place history, and he has now held that position for more than 40 years — longer than any of the others. But he didn’t originally plan to spend a lifetime in the restaurant industry. After graduating from Kent State with a business degree, Thomas expected to get a job at a big company like IBM or General Electric. Those plans were derailed when the self-described “product of Vietnam” realized the corporations he was applying to would require him to get a haircut before hiring him. He changed course and accepted a management position at The Loft bar, and the opportunity to purchase Ray’s came not long after.

The 40 years Thomas has been at the helm of Ray’s Place have proved important in establishing the bar’s legacy. One especially big moment came in July 2011, when the Ray’s Mo-Fo burger was featured on an episode of Food Network’s show “The Best Thing I Ever Ate.” In the episode, celebrity chef and Cleveland native Michael Symon spends more than two minutes praising the double bacon cheeseburger, saying it “will bring you to a burger paradise where you’ve never really been before.” Thomas says that episode took Ray’s burger sales to another level.

“We were already doing a lot of burgers, but even after that it was crazy,” he says. “A guy came from Canada, took his boat across Lake Erie, docked it somewhere up around the islands, got his car and came down here. We had people coming from everywhere just to check out the burgers.”

Despite the burgers briefly turning Ray’s into a tourist destination, the most loyal customers tend to come from far nearer than Canada. One of those regulars is longtime Kent resident Tony Zucchero, who describes it as “the center, the core, the heart of downtown.”

“Ray’s is kind of like our town’s ‘Cheers,’ if you remember the TV show ‘Cheers,’” he says. “Cheers” was a sitcom that ran throughout the 1980s and focused on a bar in Boston where locals gathered to drink and socialize. Zucchero says his class reunions tend to stop there for the food and memories from their youth in the 1980s and ‘90s.

He remembers seeing the atmosphere and customers of Ray’s change as the sun went down.

“It was always pretty much a townie place, but at night during the school year, it would turn into more of a college bar,” he says.

After dark, the main attraction shifts from the burgers to another classic — the Ray’s Long Island iced tea. Best of Kent voters like the Long Island, voting it the Best Alcoholic Drink in town. One voter tells us they like it because “it’s THE signature drink,” while another likes how “you get drunk on it fast lol.” But Thomas likes it because it doesn’t come from a mix.

“In other words, we pour the gin, rum, vodka, then we have the sour mix and we have the Coke and the lemon, so on and so forth, and the triple sec,” he says. “Some places buy a premade, pour-it-out-of-the-bottle (mix), so we don’t.”

In some ways, the Ray’s Long Island is like the business itself: It’s distinctive. It has character. It doesn’t change all that much, but it doesn’t need to change because everyone already knows it’s good.

Pointing out the various photos and newspaper clippings hanging along the restaurant’s walls, Thomas reflects on the history of Ray’s and what it has meant for generations of Kent residents and students.

If the past is any indication of the future, Ray’s will be seeing third and fourth generations of employees before long, and customers whose great-grandparents frequented the bar generations ago because of its wide appeal. Thomas wouldn’t have it any other way.

“I think we have something for everybody,” he says. “Whether it’s food or drink, I think we’ve got something.”

Dylan Reynolds is the engagement editor. Contact him at [email protected]