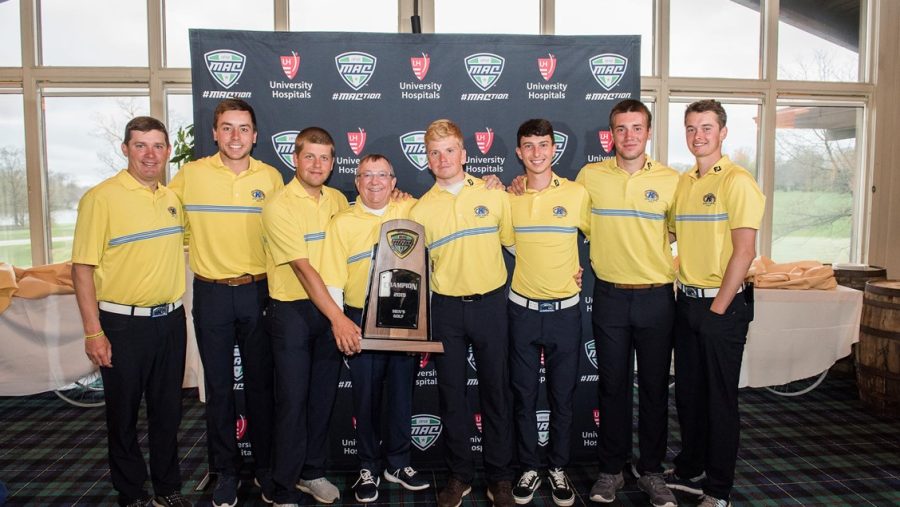 The Kent State men’s golf team were looking to start the postseason as Mid-American Conference champions.

After the first round, the Flashes were six strokes behind Eastern Michigan.

However, through perseverance and a “never say die” attitude, the Flashes came from behind to tie the score at the end of round two before rain washed out rounds three and four, ending with the Flashes earning the title of MAC co-champions to earn an NCAA regional appearance.

Coach Jon Mills is pleased with the result.

“I liked how they performed,” Mills said. “We struggled a bit in the morning, but it was awesome where and how we bounced back. It was the first time everybody was supporting each other. It was nice to see.”

Being co-champions to Mills won’t affect the program.

“Maybe it would have been nice to have number one, but as a whole, it’s another MAC Championship,” Mills said. “It’s a great way to finish.”

“We are still champions,” Page said. “You accept what happens, and we got an NCAA bid. I respect Eastern Michigan. They played well, but I think my players started the second round more focused.”

The outcome looked a bit gray for the Flashes, but after making a substitution to put Josh Gilkison in for the second round, the Flashes began to chip into Eastern Michigan’s lead.

“We got off to a pretty good start second round,” Mills said. “We began to put pressure on them, and we pecked away. It was pretty much a back and forth. Everyone knew last day could get washed out, and they knew what was at stake.

“We didn’t think we got content at all, and you didn’t know what was going to happen.”

Page felt like they were going to win before the event started.

“I felt we were very confident we were going to win,” Page said. “It was almost a belief that we were the defenders, and we made some great shots going down the stretch.

“Golf is not just about hitting the golf ball. It is about never giving up and never quitting. We had our backs against the wall. There are going to be some tough times, and that’s what makes it special. I am so proud of all my players.”

The Flashes will have their regional location announced Wednesday night on the Golf Channel.

Zachary McKnight is a sports reporter. Contact him at [email protected]