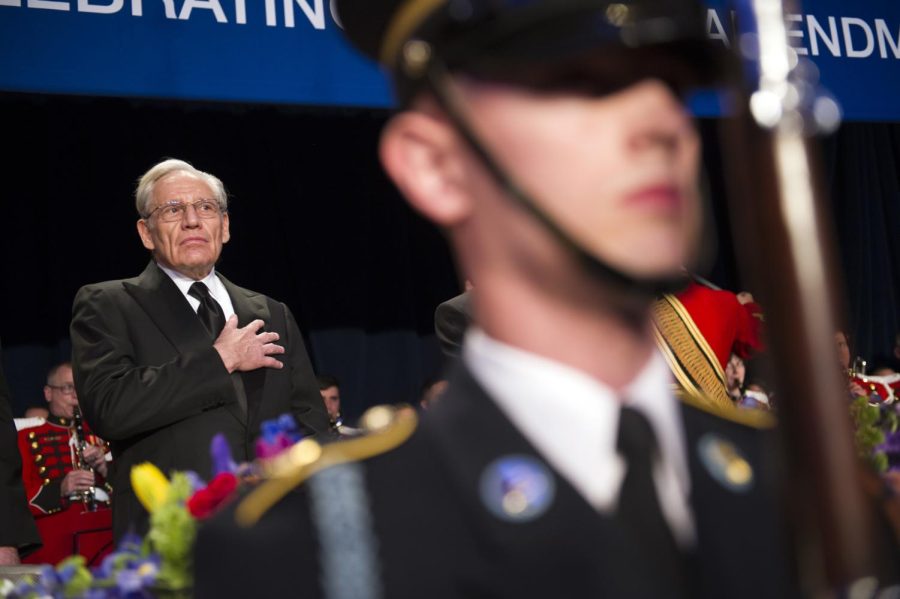 Journalist Bob Woodward places his hand over his heart as an honor guard performs the National Anthem during the White House Correspondents' Dinner in Washington, Saturday, April 29, 2017. (AP Photo/Cliff Owen)

After free tickets for the Kent State University Presidential Speaker Series with Bob Woodward on May 4 sold out, the university moved the event to the Memorial Athletic and Convocation (M.A.C.) Center to accommodate more people, according to a university press release.

The event, originally scheduled to be held in the Student Center Ballroom, was moved to the M.A.C. Center after tickets sold out on March 28, the day Kent State announced the event.

Woodward, the associate editor at The Washington Post, will speak at 7 p.m. on May 4. He will discuss the Vietnam War leading up to Cambodia and reflect on Richard Nixon’s quote that “the few days after Kent State were among the darkest of my presidency.”

Woodward has worked at The Washington Post since 1971. Woodward won the Pulitzer Prize for his coverage of Watergate and 9/11.

Jeff St. Clair, the host of NPR’s “All Things Considered,” will serve as master of ceremonies during Woodward’s appearance, which is co-sponsored by WKSU.

The event is free and open to the public, but a ticket is required for admission. For tickets and more information, visit www.kent.edu/president/speakerseries.

Woodward is the latest speaker to be featured in the Presidential Speaker Series. Previous speakers include Dan Rather, Elie Wiesel, Nicholas Kristof, Sheryl WuDunn, Trey Ratcliff and Ken Burns.

David Williams is a senior reporter. Contact him at [email protected]