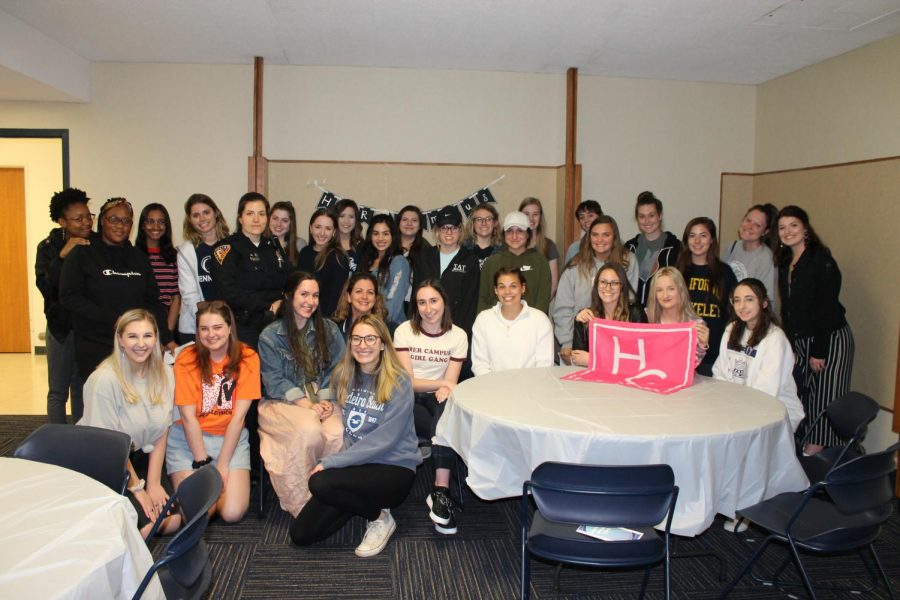 Members of Her Campus Kent State and Kent State Police Department pose for a photo on Monday.

“We are focusing on empowerment,” said HCKSU president Sammy Pesick, a senior fashion merchandising major. “We are working with the Kent State police department to talk about women’s safety.”

Her Empowerment kicked off the first of four HCKSU events taking place this week. The event focused on empowerment and self-defense for women.

Knoles said self-defense classes are “diminished” where people may not remember the physical moves and motions to ward off an attacker in the moment. Instead, the Kent State police department teaches about mindset and situational awareness.

Kent State stands out for its safety among other universities.

“Last year, alarms.org did a survey and used the FBI crime report statistics, and they recognized (Kent State) as the safest campus in Ohio and the 25th safest campus in the United States,” Knoles said.

Knoles told members of HCKSU to be cautious of where they are no matter what.

“Situational awareness is the number one thing you can do to keep you safe,” Knoles said. “You can always call the police if something feels off about someone; it may help someone else.”

Although weapons are not allowed on campus, pepper spray is allowed. Mace, however, is not allowed.

Knoles told students about pepper spray safety and gave tips on what to do in case they would need to use it. She informed students to buy stream pepper spray rather than foam pepper spray and to spray in a “T” or “Z” when using on an attacker.

“I thought it was very informative,” she said. “I didn’t know most of the things about pepper spray, so I thought that was very helpful.”

Maggie O’Neill, HCKSU’s events director and a sophomore fashion merchandising major, was in charge of planning HCKSU events for the week.

“This is our fifth year doing ‘Her Week,’ but I kind of put my own spin on it by doing a self-defense event,” she said.

HCKSU is also hosting “Her Career,” “Her Health” and “Her Party” this week.

Samantha is the construction reporter. Contact her at [email protected]