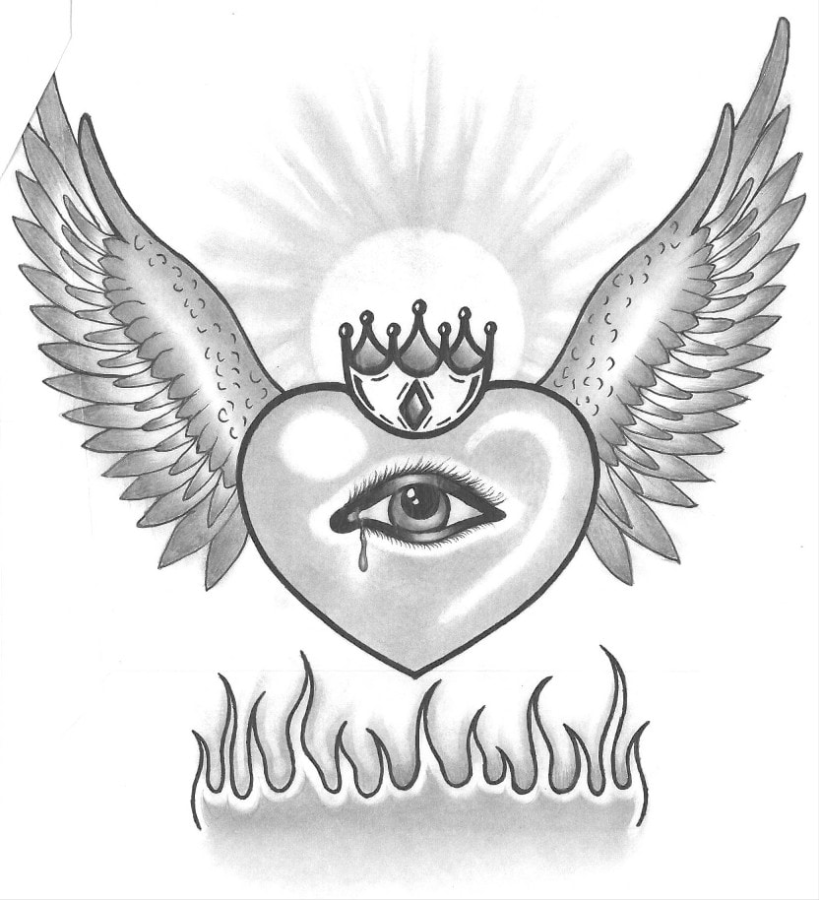 “Wings (Open)” by E.L., an illustration done by an inmate who is part of ID13 Prison Literacy Project.

The ID13 Prison Literacy Project provides opportunities for the incarcerated at Lake Erie Correctional Institution to express themselves through literature, poetry and art.

“The term ‘literacy’ doesn’t refer to the ability to read, but a broader term — the understandings of connections, cultures and different experiences,” said Christopher Dum, the co-founder of ID13 and an assistant professor in the department of sociology.

The first part of the project includes running workshops inside the prison. Inmates express themselves through their writing and art. The second part includes sharing the work with the outside communities.

“We’re able to bring a lot of things into the prison that the guys in the writing group would not be able to access,” said Bengt George, a graduate student in the College of Arts and Sciences. “We’re able to be mediaries between the broader public and the guys in Lake Erie, and now Grafton Correctional.”

ID13 started in the summer of 2016 with a group of inmates who started a book club themselves. From there, a staff adviser reached out to Kent State to find experts who could help lead the group.

Toward the beginning, the group focused on reading books. Now, the group creates its own literature and art, Dum said. The inmates’ writings and works get published on the ID13 website,

and the group has public readings at least once a month. The readings have taken place in areas such as art galleries, bars, DIY venues and churches.

ID13 also provides digital cameras to inmates when they get released so they can document their lives and still be connected.

“Usually people are really intrigued by it because it’s different,” George said. “The fact that we’re coming up there and sharing other people’s work for a good reason, because they can’t be there. It adds a more personal layer to the things we might be talking about.”

The published works and the research the group conducts focus on changing the public opinion of people getting out of prison. ID13 had a poetry reading at an event with a community center in Akron, the Way Of Mind and Body, to help campaign for Issue 1, George said. The group also focuses on engaging and connecting with the community and local artists.

“We’re really fortunate to have that connection,” Dum said. “Through serendipitous stuff, we’ve been met other local poets and people involved in the writing scene.”

Two local poets helped to put together some of the public readings, including the first one.

“We look at the public displays that people do and how that affects people’s attitudes toward people who are incarcerated,” Dum said. “Essentially, the cool thing that we found is if you consider all the different types of information people might get in the world about incarcerated people, you might get a news story that is very negative.”

Dum said the project tries to bridge the gaps between incarcerated people and citizens on the outside who might not know anything about incarceration. “We’re trying to create connections between those two worlds,” he said.

The group also has a contest running for local artists to create a mural that will be placed on the outside wall of Scribbles Coffee in downtown Kent. Applicants have until June 1 to submit their work and any additional information can be found on the ID13 website.

ID13 will host an event at the university April 23 at 6:30 p.m. in the CAED. The event will include a panel with people who have been involved and interactive writing prompts with the audience.