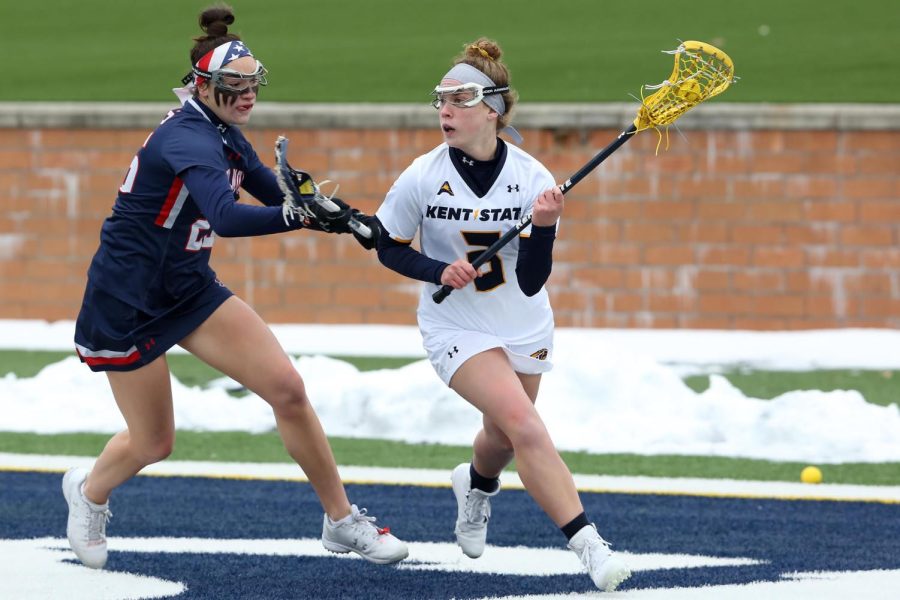 The referee blew the whistle and Kennesaw State won the first draw control of the game. The Owls immediately made a run on Kent State’s half of the field, but the Flashes swarming defense led to a quick turnover inside the goalie’s circle.

That type of play was indicative for the Flashes over the first 10 minutes of their Thursday afternoon matchup against Kennesaw State, as their strong defensive effort led to a quick opening goal from Lluna Katz.

Despite the offensive surge in the first half, Kent State had trouble holding off the Owls in an 18-11 loss.

Kent State held off the Owls a minute after Katz’s goal, adding a goal from Megan Kozar. Katz tallied her second goal a minute later.

The Owls first goal of the game was scored by Anna Giulitto. With another opportunity to score the Flashes held off Kennesaw State’s attempt and Katz scored with an assist from Jones.

After adding goals from Katz and Anna Woodhams (her first goal of the season) the Flashes’ struggled to find the back of the net.

With 12 minutes left in the second half the Owls’ scored two goals a matter of minutes, with the scores coming from Abby Squires and Siena Gore.

The Flashes went into halftime holding a 9-6 lead.

“We played very well,” Katz said of the Flashes’ first-half play. “That was the first time we’ve ever played as a team for the longest time, we just need to translate that into the second half.

Katz lead the Flashes with five goals while she was complimented with Kozar’s three. Jones, Nokolai and Woodhams each tallied one. Goalie Grace Merrill had nine saves.

“We had much, much less turnover that we’ve had in the past in these close games,” coach Tierney said. “We’re really taking care of the ball much better, we’re possessing much better.”

The Flashes defense struggled to hold off the Owls in the second half. Kennesaw State scored two goals in the 15th minute before tallying five more goals.