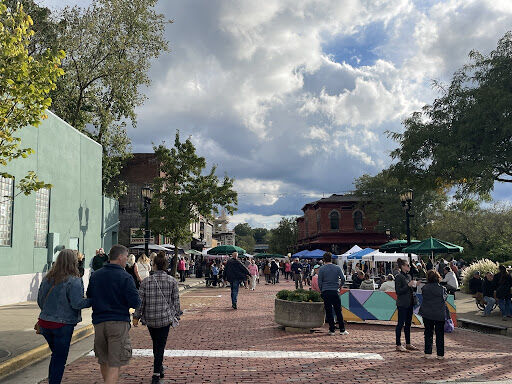 This past Saturday, Main Street Kent put on its annual Oktoberfest where restaurants and vendors brought a bit of German culture to the community, along with plenty of beer.

“​​We like participating and being a part of the Kent scene,” Charlie Thomas, owner of Ray’s Place, said. “You know it’s kind of a community thing where it brings everybody downtown, and everybody’s having a good time with the German music and the dancers, and of course the food.”

Ray’s Place was one of many restaurants participating in the festivities. Restaurants downtown displayed special menus in theme with the German food culture. Vendors lined the streets selling everything from beer to pierogis and pretzels with cheese.

One of these vendors included Daisy Cakes, which sold eight different kinds of cake pops. Four of them included different beers provided by Platform Beer Co. Kelly Svendsen, an employee at Daisy Cakes, said the event was great for business.

“Business has been wonderful,” Svendsen said. “I think we are a little around 400 we have sold today so far.”

Daisy Cakes was not the only business who experienced many sales. The Pierogi Lady seemed to be sold out because the workers closed down halfway through the event.

The “pierogi line has been probably 100 deep all day,” Svendsen said.

Ray’s Place made 600 bratwurst for the day and prepared German food for Oktoberfest.

“We have been prepping the bratwurst and the German salad,” Thomas said. “And the sauerkraut we prepped for the last day or two.”

The event gave a chance to highlight downtown businesses and the beauty the area has to offer. Frank and Diane Bindreiter attended this year’s event. They have been coming for a few years now.

They said their last name was of German descent and the event meant a lot to see their heritage being celebrated.

“My parents are from Austria and my brother was born in Austria,” Frank said. “So when we see Oktoberfest, we get out, we drink the German beer, we get the food, and we enjoy it.”

Both Frank and Diane attended Kent State and have celebrated events in the city of Kent over the years.

Frank added that he enjoyed seeing downtown Kent getting recognition and he also liked seeing the community connection through this festival.

“Kent, how they have revitalized downtown,” he said. “We come for the blues festival, any chance that Kent is doing something over and above, we come to those events because it is a cool atmosphere.”

Lucy Connolly is a reporter. Contact her at [email protected]