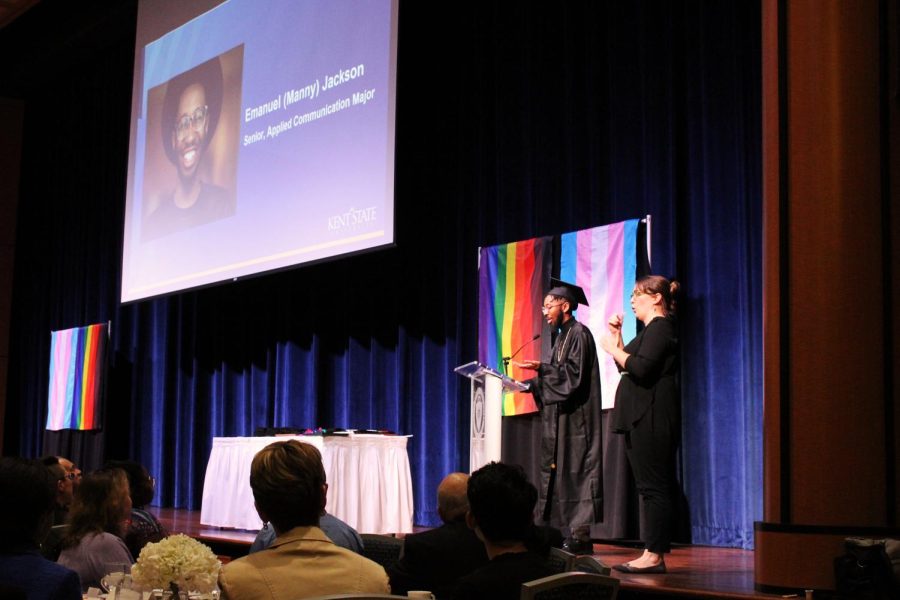 Graduating senior Emanuel Jackson talks about his gratitude and inspiration for those who have overcome obstacles for being part of the LGBTQ community during his speech. April 6, 2019.

Tori Swarm and her mother, Becky Michael, attended the Lavender Graduation pre-event reception together Saturday, just as they had attended the ceremony together in 2015 when Swarm participated as a graduate.

“Putting that stole around you is the first sign of you’re going to graduate. You’ve made it. You’re successful,” Swarm said. “Especially when we still live in a world where a lot of LGBTQ students don’t have that opportunity to even survive to see a graduation or can’t persist through college … it was a great moment where I could say I was doing this not just for me, but for my friends who would never have that opportunity.”

Swarm expressed her appreciation for her parents who came to her Lavender Graduation, and her mother expressed her pride for Swarm.

“I was there,” Michael said. “Of course, I was. I had a bouquet of flowers for her. … That’s my little critter. She’s accomplished something.”

Swarm helped get Kent State’s Lavender Graduation off the ground in 2013 while working at the LGBTQ Student Center. Swarm, now a member of the Kent State LGBTQ+ Alumni Chapter, helps plan the event, which has grown in size throughout the years.

“When I walked in and saw the size of this ballroom, it made me very happy that the LGBT community is being recognized in such a wide scale,” she said.

Lavender Graduation is a pre-commencement celebration of LGBTQ and ally students, said Ken Ditlevson, the director of the LGBTQ Student Center.

“There are so many barriers that LGBT students face on a daily basis,” Ditlevson said, “including sometimes family rejection, lack of finances and many, many more. There are a lot of barriers that prevent a lot of marginalized communities from reaching graduation.”

Some students said they faced barriers throughout college due to their gender and sexuality, while others said they didn’t.

Ross Varndell, who graduated in 2016, said he didn’t feel like he faced barriers during his college career because Kent was “welcoming,” and he happened to live on a dorm floor that had a lot of transgender people.

Varndell came out as transgender during college, and he completed most of his transition during that time.

“For a lot of LGBT people, college is the first time they come out, and the first time they see people who are like them,” he said. “You have this whole other life in your college world that is you coming to terms with being LGBT. … At the end of college, it’s nice to have a recognition that you had that experience.”

Lavender Graduation, which is celebrated on various college campuses, began at Kent State in 2013.

At the pre-event reception, Jeffrey Bixby, a 1978 Kent State graduate and a member of the LGBTQ+ alumni board, said his time at Kent State and his participation in Kent’s LGBTQ group helped him open up later in life.

“I was an out school teacher,” he said. “Kent gave me that background, too, being out and being happy with myself.

“When I went into my profession as a teacher, I wasn’t afraid to be who I was. Being here helped me tremendously with that.”

He expressed that Lavender Graduation is moving for him.

“I have to get the paper towel and the Kleenex,” he said. “I end up crying through the whole thing, just seeing [students] starting on their life outside of school because they’ve had this support here on campus all these years. … It’s their time to go out into the world.”

The Lavender Graduation ceremony began with Ditlevson stepping out on a stage decorated with two pride flags and two transgender pride flags.

He acknowledged the indigenous land the event was held on as graduates and their guests ate dinner. He thanked those that helped put the event together and acknowledged the recent passing of Dolores Noll, a former Kent State professor and LGBTQ rights activist.

University President Beverly Warren served as the keynote speaker of the night. She encouraged students to be their authentic selves and lead with compassion.

“Being true to yourself is the only way to reach your full potential,” Warren said. “It requires a full measure of bravery.”

She reminded students they are “worthy just the way [they] are.”

“You’re worthy of the amazing things life has to offer — kindness, passion, success, love,” she said. “They’re all yours because you truly are worthy of the best in life.”

Warren quoted the poem “I Worried” by Mary Oliver — “a Pulitzer Prize-winning poet, a Cleveland native, a lesbian,” she said. She encouraged the audience not to worry, and instead to go out bravely into the world.

Emanuel Jackson, a senior applied communications major, served as the student speaker, addressing the contrast between the “world of support in [the] room” and the “exhausting” fight to “be heard” and “exist” outside of that room. He encouraged students to view Lavender Graduation as a “moment that is endless in time.”

“Remember that your existence is absolutely enough, and it is often too beautiful for those of this world,” he said. He received a standing ovation upon his conclusion.

T.J. Horwood, the president of the Kent State LGBTQ+ Alumni Chapter, then took the stage to encourage graduates to join the oranization and stay connected to help future students. He hopes their chapter creates a “long-term sustainable support for students.”

Graduates were allowed to bring family and friends with them to the ceremony at no charge.

Alexandra Sobczak is a general assignment reporter. Contact her at [email protected]