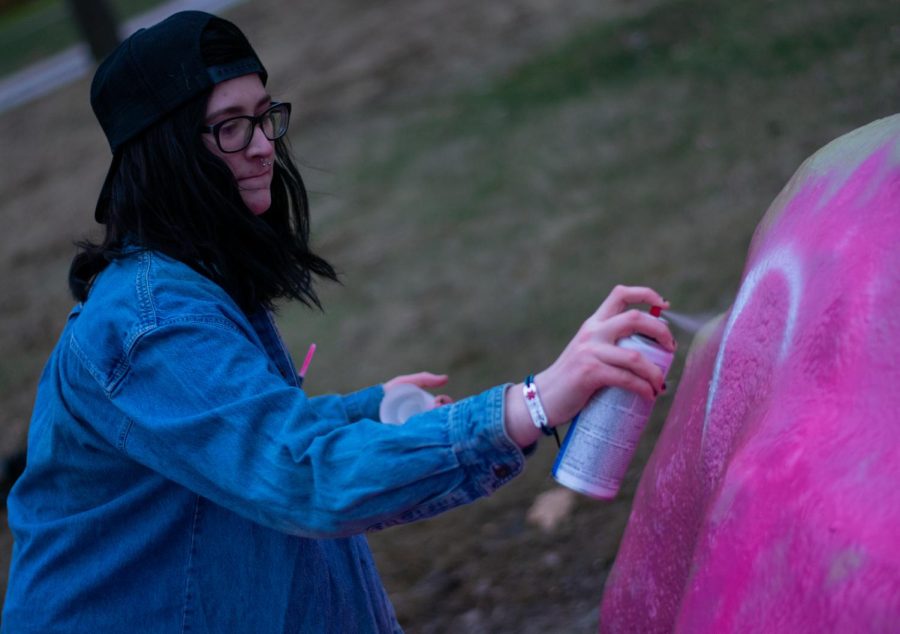 Students — bright pink signs in the hands of every one — paraded down the Esplanade shouting, “My body, my choice! Her body, her choice!” Thursday for a march hosted by the Planned Parenthood Advocates of Kent State.

The activist student group wants to ensure access to affordable medical care for all.

The crowd started on the K and marched to paint the Rock on front campus. “Protect abortion,” they wrote with pink and white spray paint.

The Ohio Department of Health notified 26 Ohio Planned Parenthood locations on March 21 that it will be cutting all state funding in April.

“The majority of the programs that were cut were programs that helped protect against black infant mortality rates, which are the highest rates in the country, as well as STI protection, HIV testing and things like that,” said Mackenzie Burchett, the president of the Planned Parenthood Advocates of Kent State.

Planned Parenthood offers a range of resources, including reproductive health care, and is often utilized by college students. Before March and the cut off by the Department of Health, it received funding administered by the state from a federal program known as Title X. The family planning and related preventative health care it is designed to provide is targeted to low-income families or those without insurance.

Kent State Students for Life, a group that aims to provide resources and offer support for pregnant and parenting students, agrees with the Ohio House that funding for Planned Parenthood should be cut.

“Our organization believes that Planned Parenthood harms women and children,” said Leandra Westbrook, the Students for Life social media coordinator. “Our goal is to shed light on the travesties committed by abortion clinics and to refer women to organizations that will help them, not hurt them.”

Instead of Planned Parenthood, the group advocates that the funding should go toward pregnancy resource centers that provide women with help they will need throughout pregnancy, such as pregnancy tests and prenatal vitamins, as well as diapers, wipes and formula, for free.

“I think we need to do better as a society to support women who are struggling with having a family,” Westbrook said. “There needs to be a day where we can say that abortion isn’t an option. To do that, women need to be aware of the other options that are accessible to them and know that they have a community behind them every step of the way.

“I truly believe that pregnancy resource centers do more for pregnant women with providing them what they need to have a healthy life with their children.”

Participants in the march said the services available now at Planned Parenthood locations will still be offered, but they will all be paid for out of pocket, which will limit the number of people who can afford to use these resources.

“Planned Parenthood is not going anywhere,” said Traci Person, the regional field manager for Planned Parenthood in Greater Ohio. “We will still serve the community. What the government is trying to do is make you pay for it, and that’s not right.”

Emma Getz, past president of the Planned Parenthood Advocates of Kent State, said, “We shouldn’t be afraid of not being able to have the health care, especially when college students are facing a time when they don’t have the money to pay for birth control.”

Person said Planned Parenthood is the most-trusted health care facility in the nation. Now, she said, thousands of dollars that were part of its budget in Ohio will be cut.

The Ohio House of Representatives will vote April 10 on the proposed “heartbeat bill,” which will ban abortion after a fetal heartbeat is detected, typically at around six weeks gestation. If the bill passes the House, it will go to Gov. Mike DeWine, who said previously he will approve the bill.