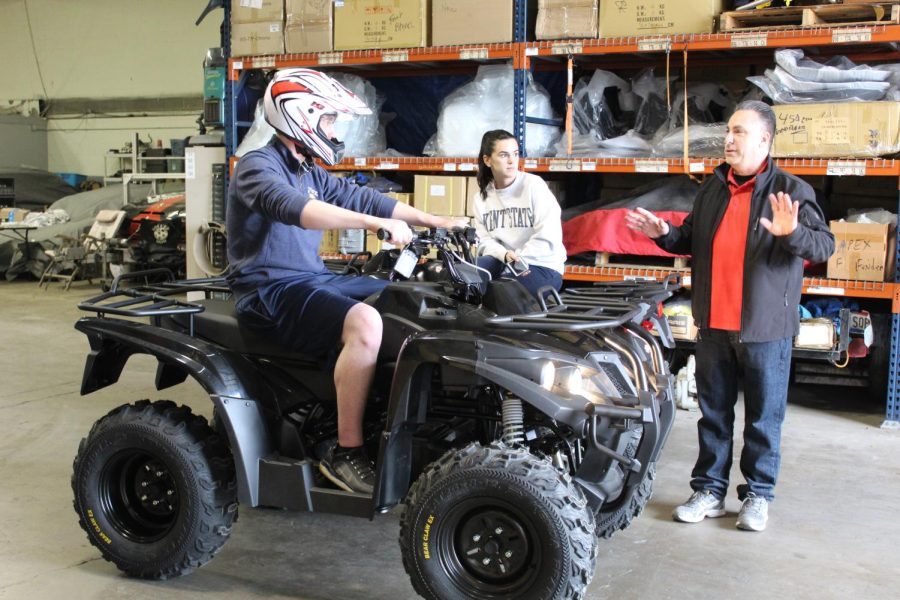 DRR USA is well-known for its traditional gas-powered ATVs, but now the company is breaking ground with a battery-powered unit, becoming the first adult all-terrain vehicle of its kind.

Most other electric ATVs are for children. They’re small and can only travel short distances. This Stealth Electric ATV was developed to serve search and rescue personnel, ecologists, environmentalists and various hobbyists and recreationalists.

Owners of DRR USA, Kim and Lou Decuzzi, hatched the idea for the Stealth Electric ATV after hearing about a case of a missing child with autism in North Carolina. Children with autism are typically frightened by loud noises, so looking for that missing child with the traditionally loud search and rescue equipment would make it hard to find them.

Lou Decuzzi began designing the ATV in hopes to help with the search and rescue process for the missing child.

“We started the process, and with the little kid, we kinda pushed it. They were using helicopters, drones, SUVs and it’s just so loud,” Decuzzi said. “Those things are like 80 decibels, so if you’re lost in the woods you can’t hear anything. You can’t hear a call for help.”

Decuzzi called the police department once the prototype of the ATV was finished to offer it to them to use, but unfortunately it was too late.

“I think the most difficult part in creating something is having the motivation to finish it,” Decuzzi said. “It came out and it was supposed to help people. We heard what was going on and that was the key to push us past the line. That was the key that we have to finish this.”

DRR USA Marketing Manager Kelly Green said that the ultimate goal with this electric ATV is to do testing with police and fire departments for search and rescue missions.

“That was the original idea with this,” Green said. “We do want to make it available for ordinary people to be able to have as well.”

The Stealth Electric ATV is an eco-friendly alternative to the traditionally gas powered ATVs. A traditional ATV can release over 120 pounds of carbon dioxide into the atmosphere with a single tank of gas.

DRR USA graphic design intern and Kent State graduate Nicole Albright created all the multimedia content to promote the project on their website and Kickstarter.

Albright said that Florida would especially benefit from using an electric ATV alternative.

“They’re so adamant about the coral reefs and the sea life and they want everything to be as clean as possible because of what we’re doing to the environment,” Albright said. “So why not use a unit like this? Because then you’re eliminating all those fumes.”

With there being such a strong desire to integrate more eco-friendly practices, it may seem surprising that an adult-sized electric ATV hasn’t been produced before DRR USA debuted theirs.

Decuzzi said he thinks his company was first because DRR USA is a small business, so it can innovate quicker than some of the bigger companies.

“If you were Yamaha (Motor) and you told me I had to build an electric ATV and I failed 999 times, do you think you’d even let me fail that many times?” Decuzzi said. “No, maybe once or twice and then it’s done.”

Green and Albright took the ATV to a recent Trailfest in West Virginia to display the innovation DRR USA had been working on.

“When we were there, every single person that we would pass would be amazed because we would zip by them but they wouldn’t hear us,” Albright said. “But anyone else on a (gas-powered) ATV, you can’t even hear yourself talking. I think a lot of people were interested in it.”

Equivalent to about a 2.5 gallon gas tank, the battery can run all day depending on how it’s used. The vehicle also has an approximate 500 pound carry weight, making it possible to carry the spare battery around if necessary.

Most people who ride ATVs are gasoline people and want power, Green said. But despite that, this battery operated alternative has been well-received thus far.

“I think this one specifically targets a different audience for different uses,” Albright said. “It’s more so targeted for park rangers or maybe a farmer that doesn’t want to contaminate all their food when they get from point A to B on all their acres of land. People who would use it more for tasks than activities.”

DRR USA’s website and Kickstarter is still available for anyone interested in learning more about this eco-friendly project and the other products and services the local company offers.

Decuzzi highlighted DRR USA’s passion-driven success in innovating this project and hopes to gain more traction and get people interested in buying a Stealth Electric ATV of their own.

“Tesla has money and they failed all the time. They even blew up rockets but they don’t care because they’re driven to change the world,” Decuzzi said. “We may not be that driven, but it can still be a game changer.”

Maria McGinnis is the technology reporter. Contact her at [email protected]