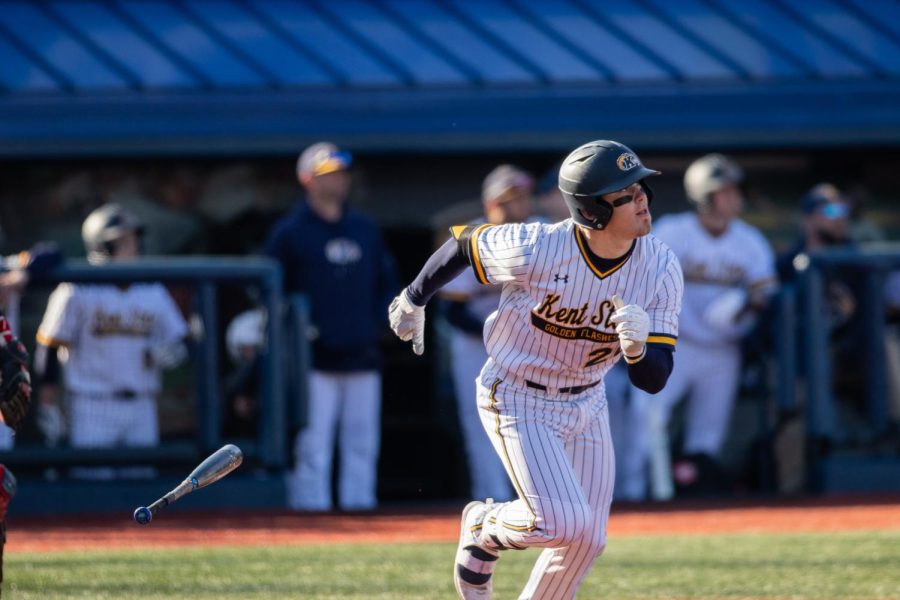 Kent State baseball captured a 9-8 win over Pitt on Wednesday on a walk-off hit from senior Pavin Parks.

Parks capped off a 4-for-5 night with a bases loaded single with two outs to drive in the winning run. Parks finished with a home run and a double with 2 RBI. He also received the win on the pitching side, closing out the ninth inning.

“The other guys in front of me did a great job getting on base and they gave me a good opportunity to be in that position,” said Parks. “If we keep at our approach and take it one game at a time we will continue to keep growing and building as a team.”

The Flashes collected 15 hits and found themselves battling back after falling behind at different junctures.

“I think our offense is really relentless right now and it’s dangerous,” coach Jeff Duncan said. “It’s good to see and I don’t think we are out of any game. I think they are believing that we can get this thing done.”

Pitt jumped out to an early 1-0 lead in the first inning, forcing a pitching change for Kent State that would substitute freshman Peyton Deats for sophomore Jack Zimmerman with two outs in the inning.

Kent State responded with three runs in the bottom of the first.

Sophomore Ben Carew and junior Cam Touchette both reached on singles to put runners on. Sophomore Michael Turner would knock in Carew to tie the game at one and then senior Kian O’Brien knocked in Touchette with a sacrifice fly to give the Flashes the lead. Parks’ home run gave the Flashes a 3-1 lead after one inning.

Pitt added three more runs in the third and another in the fourth to give them the 5-3 lead.

The Flashes again responded with five runs in the bottom of the fourth, putting Kent State in the lead, 8-5.

Pitt would get a two-run home run in the fifth to cut the lead to 8-7. That score would remain until the eighth inning.

In the eighth inning, Pitt got the run they needed to tie the game up to send the game to the ninth inning.

With the bases loaded in the bottom of the ninth, Parks was up 2-0 in the count. On the next pitch, Parks drove a line-drive to center field to drive in Touchette to give the Flashes the win.

“We had not won too many games like this, where it hasn’t come on our side,” Duncan said. “We were able to get the win today and get more momentum, heading into the series this weekend.”

Kent State travels to Northern Illinois for a three-game series this weekend. The Huskies sit one place higher in the Mid-American Conference standings above Kent State, meaning this series is crucial for positioning.

“Northern Illinois will be a good road challenge, it is a tough place to play at times,” Duncan said. “It’s just another opportunity for us to continue to play well and I think right now you don’t want to play Kent State.”

John Conley is a sports reporter. Contact him at [email protected]