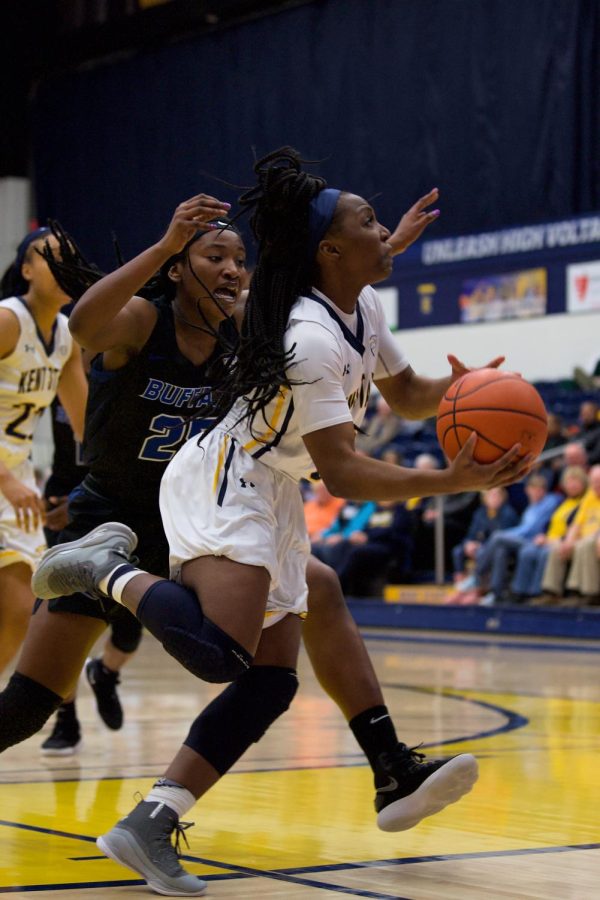 There were six seconds left Saturday when senior guard Alexa Golden grabbed a rebound to guarantee a senior day victory for the Flashes that sent them into the MAC Tournament.

Kent State players and fans stood, already cheering. When the buzzer sounded, the Flashes had beaten Buffalo 62-53. Golden and fellow senior Merissa Barber-Smith had played key roles in the win, Kent State’s 18th of the season. The Flashes finished 11-7 in the MAC, good for fifth place. Buffalo finished fourth at 12-6 and 20-9 overall.

“They have just done a phenomenal job since the day we got here,” coach Todd Starkey said about the senior class.  “They mean a lot to me. They mean a lot to our staff. Love them to death, they have been great for us.”

Kent State scored 15 seconds into the game, put up 22 points in the first quarter and held the lead for the rest of the game. Ten of those first-quarter points came from junior guard Ali Poole.

“A lot of it for me is not focusing on my shot,” Poole said. “We talk about me focusing on my rebounding, and my shots typically just kind of fall after it. I think it’s because I don’t think about it too much.”

Golden had eight of the team’s 12 assists, a career-high and most by a Kent State player this season.

“I drove and people collapsed, and (teammates) were wide open,” Golden said. “Coach always talks about not driving in too deep and to have a plan afterwards. That’s just the read.”

Golden and Barber-Smith combined for 11 rebounds.

Buffalo scored fewer than 15 points every quarter. The Bulls’ 53 points were their lowest of the year and was 24 points below their average of 77. Buffalo senior guard Cierra Dillard, who is second in the country with a 25-point-per-game average, was held to 18 and fouled out with six minutes to go.

The Flashes return to the M.A.C. Center at 7 p.m. Monday for the first round of the Mid-American Conference Tournament. Kent State will face No. 12 seed Bowling Green.

“If we shoot the ball well, there isn’t anyone in the league we can’t beat,” Starkey said. “We’ve gotta make sure we are putting our players into a position to be able to score and continue to play the type of rigid defense that we have been enjoying.”