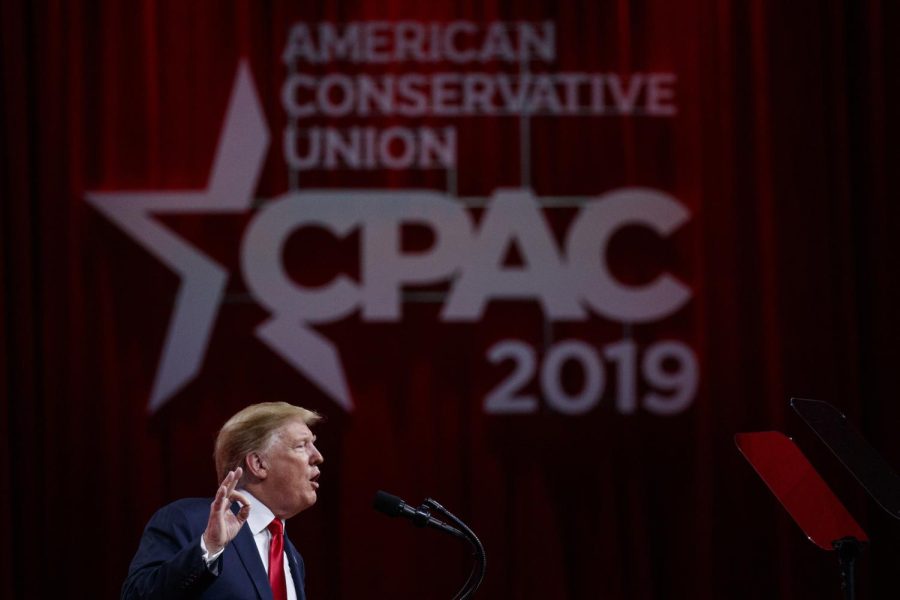 President Donald Trump said he will “very soon” sign an executive order that will deny federal funding to colleges and universities that fail to protect free speech on campuses.

President Trump announced the executive order during his speech at the Conservative Political Action Conference (CPAC) in Washington, D.C. March 2.

“Today I’m proud to announce that I will be very soon signing an executive order requiring colleges and universities to support free speech if they want federal research dollars,” he said.

He did not give further details on the executive order, how it would work or who will decide that a university or college is not protecting free speech.

The proposed executive order came after an incident Feb. 19 at the University of California, Berkeley.

Hayden Williams, 26, a field representative for Leadership Institute, an organization that helps train conservative leaders, was tabling for the conservative group, Turning Point USA, when he was approached by two men. A verbal altercation started and Williams started recording the interaction on his phone.

It became physical when one of the men hit William’s phone out of his hand. Zachary Greenberg, 28, one of the suspects, knocked over William’s table. During the incident, Greenberg punched Williams several times, according to the statement U.C., Berkeley Police Department sent to students.

Neither Williams nor Greenberg were students at U.C., Berkeley at the time of the incident. Greenberg pleaded not guilty to three criminal charges. The altercation was filmed and posted on social media and went viral.

During his CPAC speech, Trump brought Williams on stage with him and told the audience that Williams “took a hard punch in the face for all of us (conservatives).”

“If they want our dollars, and we give it to them by the billions, they’ve got to allow people like Hayden and many other great young people, and old people, to speak,” Trump said. “And if they don’t, it will be very costly.”

Trump, however, did not mention that U.C., Berkeley allowed Williams to be on campus.

U.C., Berkeley issued a statement on March 2 regarding the incident, including a timeline of events, university police responses and a response from campus administration.

“The absurd allegations regarding UC Berkeley’s support for free speech and all of its students, regardless of their perspectives, have no basis in fact,” the university said in the statement. “Our commitment to freedom of speech and belief is unwavering.”

The Foundation for Individual Rights in Education (FIRE) released a statement regarding Trump’s announcement on March 2. FIRE protects the rights of students and faculty members at America’s colleges and universities, including freedom of speech.

“While we are glad that this important national issue has the President’s attention, we do not currently have any more information on the details of the executive order,” according to the statement. “We are looking forward to learning more about this initiative in the coming days.”

Many university presidents have spoken out about the executive order, such as University of Chicago president, Robert Zimmer, who wrote a letter to the campus March 4 that was later published online.

“I believe that any action by the Executive Branch that interferes with the ability of higher education institutions to address this problem themselves is misguided and in fact sets a very problematic precedent,” Zimmer wrote.

Kent State has also experienced free speech related issues. On Jan. 17, 2018, Cameron Padgett, the booker for white nationalist Richard Spencer’s college tour, requested to book the Student Multicultural Center for Spencer to speak on May 4. The university denied the request, stating there was no available space during the time frame and he would need to be sponsored by a student organization to speak, as previously reported by KentWired.

Seth Koellner, the vice president of College Republicans at Kent State, identified the university’s denial as an example of free speech being restricted.

“The Supreme Court has found that if a university regularly makes areas available for students to speak or to invite guests to speak, they have to allow that in any circumstance… as long as it doesn’t incite violence on an individual,” Koellner said.

Paul Smalcer, the vice president of College Democrats at Kent State, cited the open carry march as an example of free speech not being restricted on campus.

“This is a public university,” Smalcer said. “They have the right to come on campus. But people have to understand what they’re saying isn’t always going to be liked by other people. They want their free speech on campus, but they also want people to hear their issues. They don’t expect people to be so against their issues.”

Overall, both Koellner and Smalcer agree that free speech has existed relatively freely on campus.

“I think Kent State is a very welcoming environment for the College Republicans, so I couldn’t be more happy to be on this campus,” Koellner said.

“There’s people out there who don’t believe in what we believe in,” Smalcer said, “but I’ve never once felt we were being stifled or limited in our ability to do what we wanted.”

“I’ve been to Kent’s campus a lot and you guys [Kent] generally have a lot of free speech on campus,” Roberts said. “You can have protests and have tables and do what you need to do and where you need to.”

“Some people on the opposite side, they just agree with this saying… you’re forcing it so it’s not free anymore,” Roberts said. “But I think that’s completely wrong… We have the Constitution. The Constitution was placed to allow free speech. And if it’s going to get limited on college campuses, it’s just totally unfair.”

The proposed executive order would not be the first example of government involvement on campus free speech.

The Ohio Senate amended and re-approved the Forming Open and Robust University Minds (Forum) Act bill Dec. 26, 2018, a model policy of free speech in higher education. The policy eliminates “free speech zones,” protects students and student groups from disciplinary action in the case of lawful expression, empowers legislators to hold universities accountable by requiring they report on free speech issues and more, according to the bill’s summary on the American Legislative Exchange Council’s website.

Raymond Vasvari Jr., a lawyer at Vasvari & Zimmerman who engages in the general practice of law with an emphasis on the First Amendment, said the details of what it means to protect free speech, what situations should be protected and which kinds of speakers should be allowed on campuses will determine the outcome of the executive order.

“Universities are within their rights to control their agendas based on quality,” Vasvari Jr. said. “They can’t control what is necessarily based on ideology if they are a public university. If they are a private university they can, but making a federal benefit contingent upon what they allowed to be said or not said on campus, that implicates all sorts of constitutional issues.”

Vasvari Jr. said there are not many cases that prove free speech gets restricted on college campuses “in the current context.”

“It’s a nothing policy (the executive order),” he said. “It’s nonsense. It’s so broad as to be contentless. Once again, it seems to be intended to be nothing, but to stir up resentment and anger.”

Alexandra Sobczak is a general assignment reporter. Contact her at [email protected]

Rachel Hale is the general assignment editor. Contact her at [email protected]