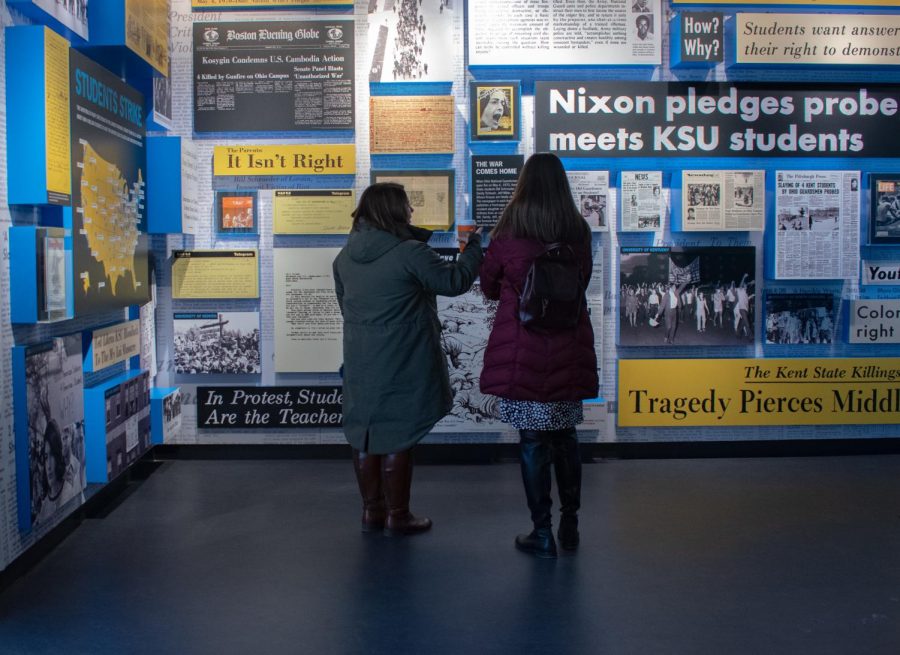 Two women observe the exhibit inside the May 4 Visitors Center Wednesday, March 6, 2019.

Editor’s note: The Kent Stater will continue to follow up on this story. Reporters will cover the May 4 Task Force meeting Thursday, March 7.

The Board of Trustees passed a resolution Wednesday that determined the university would commit to continuing commemoration of May 4, rather than the responsibility falling under the May 4 Task Force.

The resolution said, “For the continuity and sustainability of these efforts, the time is right for the university to assume responsibility for the annual May 4 commemoration and ongoing educational events through the Office of the President …”

Kent State President Beverly Warren said the university will assume responsibility for the commemorations. In previous years, the May 4 Task Force operated and planned May 4 events.

Chic Canfora, a May 4 survivor and a member of the May 4 advisory committee, supports the university reclaiming May 4 and said, “If not now, when will we trust the university to take its rightful ownership?”

Warren attributed a “deep debt of gratitude” to the May 4 Task Force, saying that without the group, the university wouldn’t have the opportunity to commemorate May 4.

Despite the task force’s letter to the university, titled “Open Letter on Bad Faith, Kent State, and the May 4th Task Force,” the resolution passed. The letter expressed disagreements on how the university worked with the task force this past year in planning the 50th commemoration.

The May 4 Task Force addressed the letter to the university Monday, which included Warren; Shay Little, the vice president of Student Affairs; and Rod Flauhaus, one of the commemoration planners.

“Our future is being decided for us without us,” the letter stated. “We believe this resolution will give the university the authority to hold the commemorations after the 50th and become the main educational body for May 4th. Many current and former Task Force leaders have objected to this proposal.”

Canfora disagreed with the sentiments of the letter. She pointed out the work that has been accomplished with the May 4 Visitors Center, the walking tour, the memorial, the markers where

the students are and national landmark status.

Janet Malaime, a member of the May 4 Task Force, said the group noticed behavior that led to the letter being written.

The open letter listed four demands it wanted the university to meet and respond to before Wednesday’s Board of Trustees meeting.

“For the past year now, … we had noticed that our concerns and suggestions weren’t being taken too seriously, “ Malaime said. “So we tried to advocate for ourselves more within the meeting, and we just kept getting sidelined, ignored, listened to but not acted on.”

Malaime said only co-chairs and the faculty adviser were invited to 50th commemoration committee meetings, but these meetings were held during class time, which kept students from fully participating.

“We wanted to see if one of our other members could be invited so that there could be more than just the faculty adviser on these committees,” she said. “We were essentially told, by Shay Little at one point, that if people were alumni or community members or not leaders, or … student leaders in the task force, they wouldn’t be invited.”

Maddie Camp, a sophomore political science major, is a student chair member for the May 4 Task Force.

“The task force mainly wants our members to be included in decision making on things such as speakers,” Camp said. “This includes not just current students, but community members and alumni, as they are a valued and integral part of the May 4 community.”

Camp said the task force had low representation at the meetings.

“I was unable to attend meetings this semester, as they interfered with class time,” she said. “I imagine that this is an issue for other students, as well, since the meetings are during the day on weekdays. Because community members were not welcome at these meetings, our faculty adviser, Kabir Syed, was the only voice consistently advocating for the task force.”

On the same day the university received the open letter, Idris Kabir Syed resigned from his position as the faculty adviser of the May 4 Task Force.

In his resignation letter, Syed stated the university removed him as a co-instructor of the “May 4 and its Aftermath” course with no explanation.

“I have been extremely honored to work for the past 9 years as the Faculty Adviser … stepping down was the most difficult and saddest decision I have made in my time at Kent State University,” Syed wrote in an email. “I am a non-tenured Associate Professor and my contractual responsibility is to teach 10 courses a year in the Department of Pan-African Studies. I hope to continue the important work I have done over the years as an undergraduate, legacy graduate and faculty member at Kent State University. I intend to teach about the history and legacy of student activism, especially that of Black United Students and the May 4th Task Force as long as I am a professor at Kent State University.”

Syed said he is proud of his legacy, but he had to remove himself because of his disagreements with the university’s oversight of the 50th commemoration.

“As I stated, I have no ill will towards the University nor their initiatives towards a more holistic treatment of May 4, 1970,” Syed wrote in his resignation letter. “I have been and will continue to be committed to moving them forward as the wounded healer that I am.”

Camp said the biggest concern of the task force is that its work through the years will be lost. Camp plans to meet with Little personally and said Little will be at the task force meeting Thursday.

“I am hoping to have the administration agree to our four demands listed in the open letter,” Camp said. “I also hope to maintain a positive relationship between the task force and the university. This relationship has been improving slowly over the years and has made significant improvement under President Warren’s administration.”

Because the resolution passed, Camp worries for the role of the task force in the future.

“People who are alumni, who are still active with the task force, are very important to us and have so much to add to the task force and commemorations because they’ve been around,” Camp said. “I would love for more of those people to be welcomed in the planning of future commemorations in collaboration with the university.”

For future presidents, the resolution stands as an expectation from the university, but it doesn’t mean that Warren’s successor has to handle May 4 events the same way as previous presidents.

Camp said going forward, the task force will focus on solidifying its role here. She thinks it’s important to collaborate with Little to continue the task force’s legacy.

“We have been so integral in keeping the tradition alive for 45 years,” she said. “If the task force didn’t exist, there would be no 50th commemoration.”

Laina Yost contributed to this story.