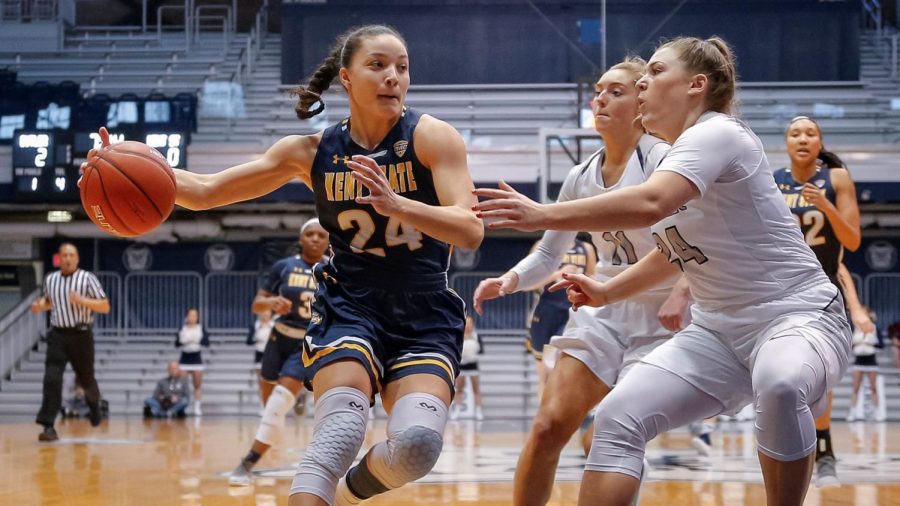 Alexa Golden drives past Butler's Kristen Spolyar in the second half of Kent State's WNIT Second Round matchup. Golden scored 11 points in her final game for Kent State. March 23, 2019.

“I chose Kent State because I knew historically the program was good, but they were struggling in the years before and I wanted to be the class that came in and turned it around,” Golden said. “Freshman year people didn’t expect a lot out of us, and when coach (Todd) Starkey came, we really trusted him, and he believed in us and I think that’s part of the reason we turned it around. Kent State women’s basketball is in good hands.”

Their freshman year, the Flashes finished with only six wins. There was no postseason. This year, the Flashes won 20 games for the first time since 2011 and also won their first round game in the WNIT. It was only the second time in program history that Kent State won a postseason game.

“When I came here three years ago, (Golden and Barber-Smith) decided to trust me and our staff, and I’m proud of that,” Starkey said. “I’ll be more proud of Merissa when she walks across the stage and gets her degree here in about a month and a half than of anything she’s done on the court, but some of the performances she’s had in the last month, 15 rebounds twice, 18 rebounds once, 20 rebounds once, two huge free throws at Green Bay to help us win that game. I mean, phenomenal. And then Alexa Golden has got to be one of the toughest, most dedicated players I’ve coached in 21 years. She’s given everything. She’s given limbs and joints to this program. She’s grown as a leader in the three years I’ve been here.”

The Flashes outscored Butler by one point in both the first and fourth quarter. However, the Flashes only scored 10 points in the second quarter, a quarter in which Butler went on a 16-point scoring run and scored 25 points in total.

Kent State had 14 turnovers in the first half and didn’t get a shot off for the last six minutes of the half.

“When Butler puts it on you, they really scramble you defensively,” Starkey said. “We only had four turnovers in the second half. I thought we played solid in the second half, did some decent things but we just ran out of gas tonight.”

This was the second game the Flashes have played in three days. The two games were separated by hours of travel time to get from Green Bay to Indianapolis.

“They had more energy than we did,” Starkey said. “They just flipped the switch and we didn’t have any switch to flip. There wasn’t any reserve tank to go to. I thought we played passive in the second quarter, but other than that, the players gave us all they had left.”

Freshman guard Asiah Dingle led the team with 13 points, three assists and three steals. Golden and Dingle both scored nine points in the second half.

“I’m very proud of this team and what we were able to accomplish,” junior guard Megan Carter said. “A lot of people counted us out from the beginning. We weren’t pressured at all, we just wanted to play and do the things that we know we can do. And the freshmen, coming in and adapting to the culture of the program, they did a really good job.”