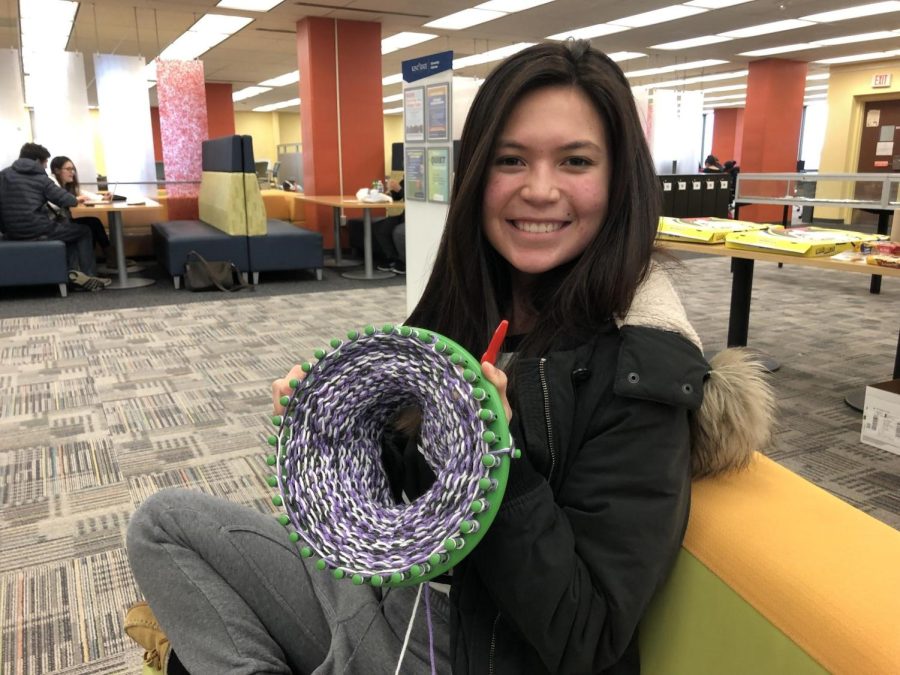 Alyssa Bodnar knitting a hat on a loom during the 12-hour Knit-A-Thon in the library Friday, March 15.

The 12-hour Knit-A-Thon hosted by Knitting for Those in Need brought in many volunteers of all skill levels to sit and make hats and scarves Friday.

Alyssa Bodnar, a sophomore special education major, joined the volunteer effort by knitting a hat. During the week before the Knit-A-Thon, Bodnar had joined another event held by Knitting for Those in Need, where she knit her first piece: a scarf. One of the reasons Bodnar said she was there was for community service hours for her sorority, Alpha Xi Delta.

“I think this is a great way (to get community service hours) because you can see what you are doing and you’re not just handing out water to runners, you are making something,” Bodnar said. Bodnar wasn’t the only sorority member there. Junior accounting major Elizabeth Edwards was also there racking up community service hours.

The hats and scarves made during the Knit-A-Thon are going to Washington, D.C. with students going on the alternative spring break. These students will be passing the hats and scarves out to the homeless, according to Knitting for Those in Need advisor Louise Ditchey.

Most people at the Knit-A-Thon were using the circular looms provided that act as a guide to making a hat. Ditchey said that they also had regular knitting needles and crochet needles, but most of the volunteers used looms. Not only are these volunteers getting community service out of this experience, but they are also learning a new trade and coping mechanism. According to Independent, knitting has been proven to lower anxiety, depression, chronic pain and slow dementia. The Mayo Clinic found in 2011 that those over 70 years olds who knit weekly had a “diminished chance of developing mild cognitive impairment and memory loss.”

The Knit-A-Thon brought together many people to create knitted goods and potentially be a pair of helping hands along the way. It served as a way for students to get community service hours while also learning something new or doing something they already love to do.

For more information about how to get involved with Knitting for Those in Need, they can be found on Facebook.