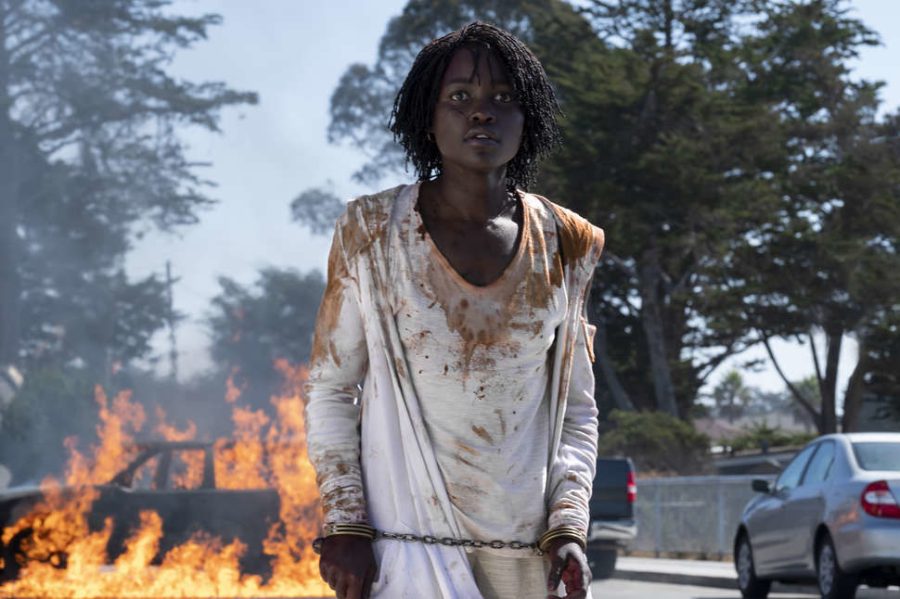 Lupita Nyong’o in “Us,” the new horror film from the director Jordan Peele.

While it’s not quite as effective as his feature film debut “Get Out,” Jordan Peele shows us again that he’s an up-and-coming force to be reckoned with in genre filmmaking for years to come. “Us” is many things; it’s surprisingly funny, oozing with tension and always thinking two steps ahead, but it overplays its hand at some points, bringing it down ever so slightly.

It’s going to be nearly impossible to discuss “Us” without spoiling anything because Peele injects every frame, every image of his movie with so much information and subtle exposition that all 116 minutes of the film’s runtime mean something. The film follows the Wilson family on vacation at their beach house in Santa Cruz. After a sun-soaked day at the beach with friends, a family appears in their driveway, a family the Wilsons notice looks strikingly similar to themselves.

From there, Peele’s direction, while sometimes a bit heavy-handed, plays with the audience’s expectations in the most delightful and twisted ways. He makes it clear early on that “Us” is not “Get Out.” His sophomore effort is funnier and bolder, taking a lot bigger swings, some of which end up in home runs and some just in singles.

Without getting too much into plot details, Peele clearly has something to say here about Americans and our penchant for self-destruction. When the other family first enters the Wilsons’ home — as shown in the trailer — the Wilsons are stunned silent, trying to figure out what could possibly be so destructive as to end up in being what they were seeing in front of them. As the son notes, “It’s us.”

The movie is grounded by some stunning acting, most notably from Academy Award winner Lupita Nyong’o as Adelaide, the maternal figure of the Wilson family. Every actor in the film also plays their less than friendly doppelgänger, but no one does so with more unabashed creepiness than Nyong’o. The sheer range the actress exhibits on a scene-to-scene basis, swapping between concerned mother to complete badass to frightening creature with seeming ease, is a revelation. I’m not sure if someone can be nominated for both Best Actress and Best Supporting Actress for the same movie, but it might be time to bend those rules a little bit.

Winston Duke plays the father of the family, and Peele wrote his role in such a way that the actor could flex his performing muscles too. Most famously known as the fearless warrior M’Baku from last year’s “Black Panther,” in “Us,” Duke plays a dad — not just any dad though, a goofy dad who makes horrible knock-knock jokes at inappropriate times, embarrasses his children by dabbing and buys a run-down old boat even though he doesn’t know how to use it. But when danger is near and he needs to, he still does anything for his family, allowing Duke to flesh out some more dimensions for his character other than a complete goofball.

On a technical level, the film is a damn masterpiece. Michael Abels, who has now worked with Peele on both of his feature films, conjures a score that is one part “The Shining” and another part “Now That’s What I Call Music” showcase. The musicality in the film toes the line between using existing songs to add tension or atmosphere to a scene, but also knows when to twist those familiar sounds into something far darker, plunging the viewer into this implacable sense of dread that something isn’t quite right. That score mixed with cinematographer Mike Gioulakis’ haunting, deliberate camerawork elevates Peele’s script to a new level.

As was the case with Peele’s debut, “Us” will undoubtedly grow with each viewing and after more deliberation and research. There are so many callbacks in the film that the audience can notice, but sometimes that only serves to make us wonder what we might have missed earlier in the movie. Peele’s greatest strength as a writer and a director through his first two movies is his deliberateness; he knows exactly what he wants to say and he knows exactly how he wants to say it, which is usually through hiding context clues in plain sight that the viewer doesn’t realize the significance of until it comes clear to them. “Us,” undoubtedly, is no different, and the film takes some digestion and processing before everything comes full circle.

But that’s OK, and maybe that’s the point. Since “Us” was released this weekend, totaling over $70 million at the box office over its opening three nights, much deliberation has occurred online over which second coming Jordan Peele actually is. But we need to make one thing clear, and we need to do it quickly before we stifle the man: Jordan Peele is not Alfred Hitchcock. He’s not M. Night Shyamalan. He’s not James Wan, and he’s not Christopher Nolan.

He’s Jordan Peele. He doesn’t need to be compared to anyone else. His films are coming from a place of introspection, a look inside his character, his upbringing and his truth to try to create something relatable, something to make us think about where we’re going wrong and how we can be better. That should be celebrated, not compared. His originality and bravery in telling stories we don’t see as often is what should be commended, and the moviegoing public is proving that’s a profitable endeavor.

He knows the ride he wants to take us on. Instead of questioning it or trying to get out ahead of him and his artistic vision, we should strap in and prepare ourselves. After “Us,” it’s clear we’re in good hands.