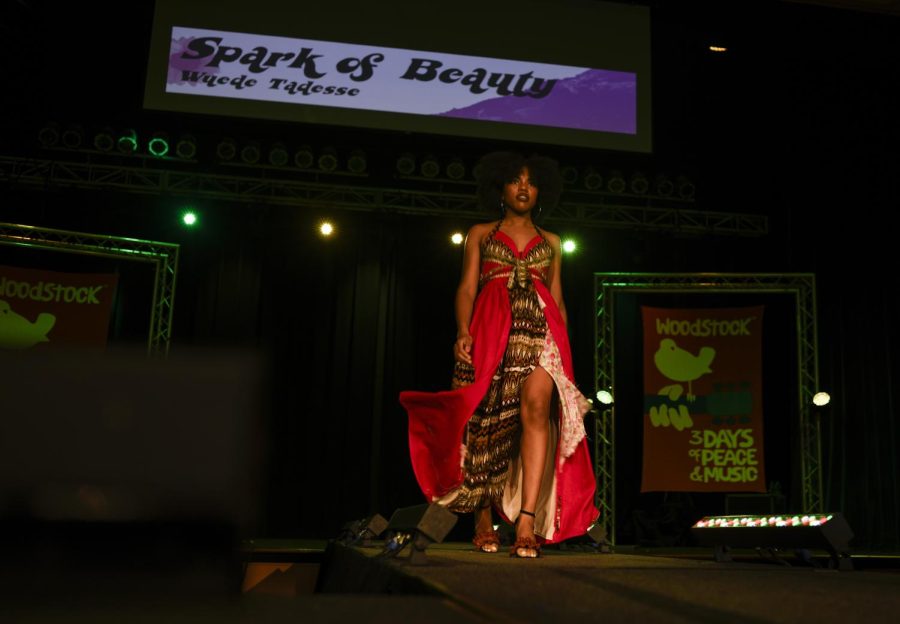 A model wearing a design from Wuede Tadesse’s Spark of Beauty collection walks down the runway druing Rock The Runway on Sunday, March 3, 2019. Wuede Tadesse won first place for her collection.

Saturday night was outta sight! With fringe, flowers and fur, hundreds of people were taken back to 1969 at this year’s Woodstock themed “Rock the Runway” fashion show,  a free event hosted by the Center for Student Involvement’s  Flash Activities Board annually.

The Woodstock Music and Art Fair made its debut in Aug. 1969 when over 500,000 people gathered at a 600-acre farm to hear 32 leading and emerging artists of the time perform. But Woodstock is not only known for its music and art; it’s also known for the fashion.

“Whenever we wake up in the morning and slip a bra top over our jeans, or rock a sheer blouse, or pop on a beloved vintage ensemble, we pay silent homage to the style of that seminal event,” Vogue author Lynn Yeager wrote in an article.

As the audience filed into the Student Center ballroom Saturday night, ‘60s rock and colored lights filled the room while 10 student designers stood backstage anxiously waiting for their Woodstock inspired looks to take the runway.

Haylee Grenus, a junior criminology and justice studies major, said the event is exciting because it transports the audience to another time.

“I really enjoyed seeing trends from Woodstock with a modern twist, including things that are still popular today, like high-waist pants” Grenus said.

While a wonderful time for the audience, the show is also a great opportunity for designers to gain experience and learn while still having fun, assistant director of the Flash Activities Board Rebecca Blaha said.

Each designer created a collection of three looks to present at the show. With the only stipulation being that fringe must be used in at least one design per collection, designers were given complete freedom to build their collection however they pleased.

“This gives designers a kind of break from school,” Blaha said. “It’s not as strict as a Fashion School show, so they really have a lot more flexibility. But it’s also great having students learn about these time periods. They put a lot of research into it.”

Grace McLain, a sophomore fashion design student and designer for the event, said Woodstock makes a good theme for this show because it was the pinnacle of the hippie movement.

“I took the Woodstock theme and accentuated the groovy and psychedelic aspects since those compliment my own aesthetic more than the traditional bohemian style of Woodstock,” McLain said. “I used bold colors, patterns and silhouettes that reminded me of the time, while also being fashion forward and trendy today.”

Although the confetti cannons exploded early, the real excitement came from the crowd when senior fashion design major, Wuede Tadesse’s “Spark of Beauty” collection filled with bold tribal patterns and bright red fabrics was announced as the winning collection.  Tadesse was awarded a $1,500 travel voucher to a destination of her choice. McLain was voted as the audience favorite with her brightly colored “Jive Wise” collection and won a $500 gift card to the designer fabric store, Mood Fabrics.

Whether it was psychedelic and busy or bohemian and simple, these designers drew from what inspired them to create garment collections that took the audience back in time.

Sophia Iannelli is a fashion reporter. Contact her at [email protected]