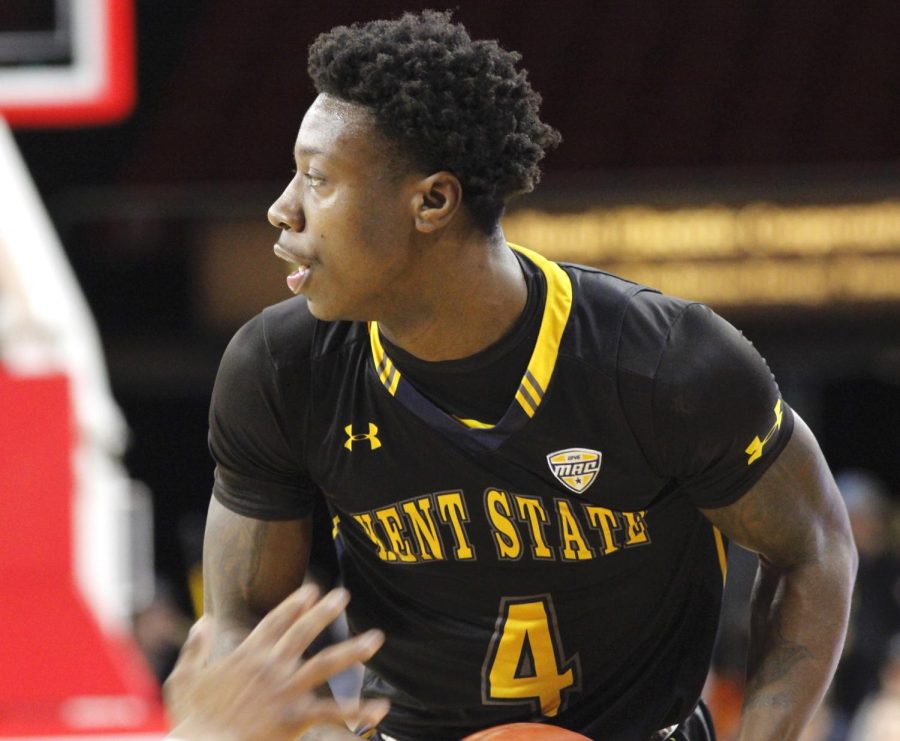 Antonio Williams looks to pass in the second half of Kent State's game against Miami (OH) on March 5. The Flashes won, 75-66.

Senior guard Jaylin Walker danced outside the locker room after learning that Kent State had moved into the MAC’s fourth seed. Walker’s impromptu dance occurred minutes after the Flashes put the finishing touches on their 75-66 win over Miami (OH).

Walker had every reason to dance, as his 29 points and 12 rebounds propelled the Flashes to victory and put them in the driver’s seat for a bye to Cleveland. It was also the first time he had won a game inside Millett Hall.

“There’s a first time for everything,” he said with a smile. “This was a good win.”

With the 75-66 win, Kent State improves to 21-9 and 10-7 Mid-American Conference, which moves them into the fourth seed. The Flashes can clinch the four seed in the MAC and a bye to Cleveland with either a win against Akron on Friday or a Central Michigan loss.

Walker’s 29 points were the most he’s had since he scored 36 on Jan. 22 in a 17-point comeback win against Toledo.

His 12 rebounds were a season high with four of them coming on the offensive end. It was his first double-double since March 6, 2017 against Central Michigan.

“(It helps my confidence) a lot,” Walker said. “Once I grab the rebound I can get out and go and move the ball.”

Walker powered a Kent State offense that struggled to score early in the first half. The Flashes shot 1-for-11 before Walker scored 23 of their 36 first half points. He shot 5-for-6 on 3-pointers in the half while outscoring the RedHawks by himself.

“A lot of his looks were in transition,” coach Rob Senderoff said. “His teammates made plays for him.”

“These are the things that I work on,” Walker said. “Jon Fleming helps me with my shooting.

“We knew they were going to get on a run because they were at home,” Walker said.

Junior guard Antonio Williams and junior forward Philip Whittington combined for 31 points on 12-for-24 shooting. They were the only players, outside of Walker, who scored in double digits.

Senior guard Jalen Avery shot 1-for-7, but grabbed four rebounds and five assists. It was his most assists since returning from an ankle sprain four games ago. He also forced a travel by  Miami’s Mekhi Lairy with about 30 seconds remaining to clinch the win.

“He made a huge defensive play to end the game forcing the travel,” Senderoff said. “Little by little he’s getting back.”

The Flashes will continue their season Friday at 7 p.m. against Akron in the M.A.C. Center. The Zips are coming off a 91-67 win over Bowling Green.