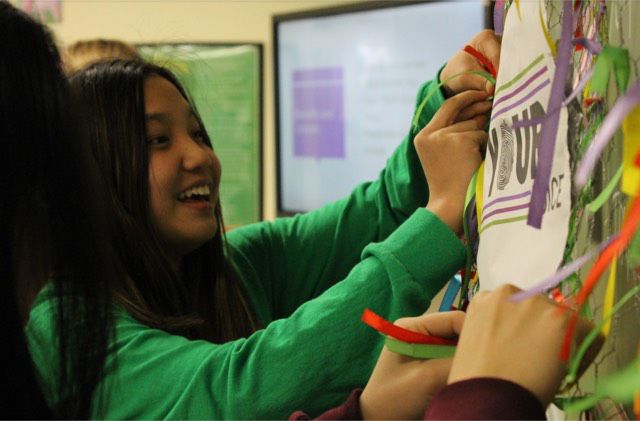 Diversity in the communication field is an ever-persistent issue, even in 2019.

This competition gives students the ability to apply the education they’ve learned to create a public relations campaign. For the 2019 competition, PRSSA partnered with Public Relations Society of America (PRSA) Foundation — an organization whose mission is to bring racial and ethnic diversity to the communication fields.

The two groups pursued different routes to the competition, with the Bateman Blue group implementing diversity in high schools.

The group traveled to Boardman High School in late February to speak to students on their understanding of diversity as a whole and diversity in the communications field.

Brynn Pennell, a junior public relations major, said that the group talked about the importance of diverse opinions and professionals in the field.

“We did a pre and post survey, we increased their awareness of inclusion and diversity by 40 percent,” Pennell said. “In the pre-survey, 98 percent of students thought the workplace was diverse. So then after we came in, the results show that 71.8 percent of students now know that it’s not.”

Lambert talked about how she earned her Ph.D in Tennessee and how she overcame racism, Pennell said.

The Bateman Gold team took a different approach to the competition and instead decided to implement diversity into Kent State by holding an event called “Rooted in Diversity” where they hosted speakers and an open discussion.

“We also had an immersive video, it showed unconscious bias and what that looked like,” said Vanessa Gresley, a senior public relations major.

Gresley said it was interesting to see that unconscious bias is a problem people see everyday.

The Bateman Gold team also created a website where students can discuss their own stories with diversity through prompts.

“We have a discussion tab that has around four different prompts that students can go on and discuss with other students, as well as a resources tab where you can go onto see different diversity scholarships,” Gresley said.

The team included a mentorship tab on their website that has blog posts from several public relations professionals from North East Ohio and Kent State alumni. The tab includes blog posts from the mentors as well as contact information.

“They’ve [the professionals] written blog posts, explaining their story within diversity and communications field,” senior public relations major Jacob Majka said. “The whole point of this was to create a mentorship platform, so they put their contact info and students are encouraged to reach out to them regarding diversity in the field.”

The Bateman competition ends on March 11. The two teams will then be informed if they have moved on in the competition where they will present in front of national judges.

Olivia Herold is the CCI reporter. Contact her at [email protected]