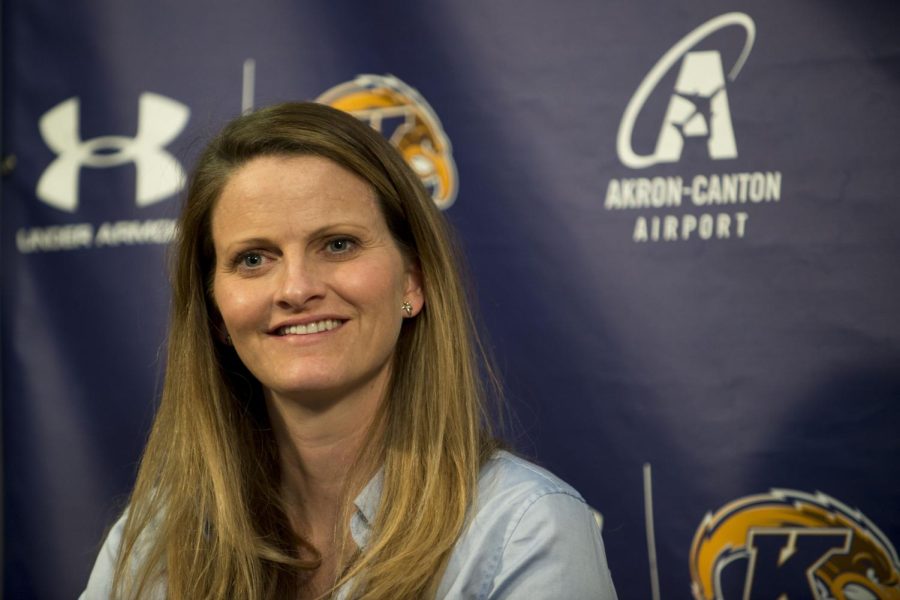 The Kent State women’s lacrosse program is gearing up to start its inaugural season this weekend.

Kent State athletic director Joel Nielsen announced the introduction of the sport back in 2016. The University added women’s lacrosse as a varsity sport under “The Game Plan,” which was “a comprehensive plan that maps out a strategic course for the department over the next five years.” The addition also completed the University’s Title IX compliance.

In 2017, the university announced the hiring of Brianne Tierney as the Flashes’ coach. Tierney is no stranger to starting a program from anew. Prior to coming to Kent State, Tierney led Lebanon Valley College in its new lacrosse program. She has also been an assistant coach and a director of camps and clinics at Lafayette College.

“I think going into games, setting some attainable goals regardless of winning or losing, there’s some things that we can find victory in,” Tierney said. “Going into this weekend, setting those goals that we want to achieve and focusing on those. I think the season can be long if you focus on the negative. So we’re trying to stay positive through the spring.”

Tierney and the coaching staff have set goals for what they want to see this season. They hope to achieve a certain save percentage goal, draw control percentage and look towards the team for how many goals they want to score for each game.

The Flashes will play in the Atlantic Sun Conference, which features women’s lacrosse powerhouses Coastal Carolina and Jacksonville State.

The team is predominantly freshmen and includes only two sophomores. Freshman Megan Kozar, Hailee Andry and Grace Merrill were elected the inaugural team captains by their teammates. “We went through a series of leadership qualities with our players and provided this list of what we were looking for in a captain,”  Tierney said. “They went through and picked which kid exemplified those leadership qualities.”

Kozar is one of the freshman Tierney is most excited to see play.

“She’s also kind of the quarterback on the attacking ends, a great leader for us,” Tierney said of the freshman attacker from Upper Arlington, OH. “She’s smart with the ball and she’s probably our most composed and patient attacker.”

For Kozar and the rest of the Flashes, the ability to start a program is an intoxicating feeling.

“We want to be figure everything out for ourselves and set a tone that coming into another team you just have to adapt, when we can kind of control the situation,” Kozar said.

Merrill will start at goalie for the Flashes. She was a first team All-Ohio selection her senior year at Jackson high school in Canton.

“She thrives on a lot of shots and she has stepped up in a big way and she’s very consistent and very calm which you need in a goalie,” said coach Tierney.

Andry will join Merrill on the defense alongside Alexis Parker.

“She plays lacrosse like she’s playing hockey,” Tierney said of Jones’ play. “She’s a Minnesota kid. She’s really killed it from a conditioning standpoint, just coming in and she’s a competitor.”

Coach Tierney said one of the biggest obstacles is the team adjusting to pace of play and rule changes in college compared to high school. The biggest rule change that the players need to adapt to is the free movement rule. In high school, players have to stop on a whistle, compared to college where players can move freely.

For Merrill, the start of the season will mean more to her than just the ability to compete again.

“I’m most excited for just being the first ever Kent State women’s Lacrosse team to ever start and just to make history,” Merrill said.

The Flashes first game is Sunday at 1 p.m. against the University of Cincinnati, with their home opener coming Feb. 16 against Robert Morris.