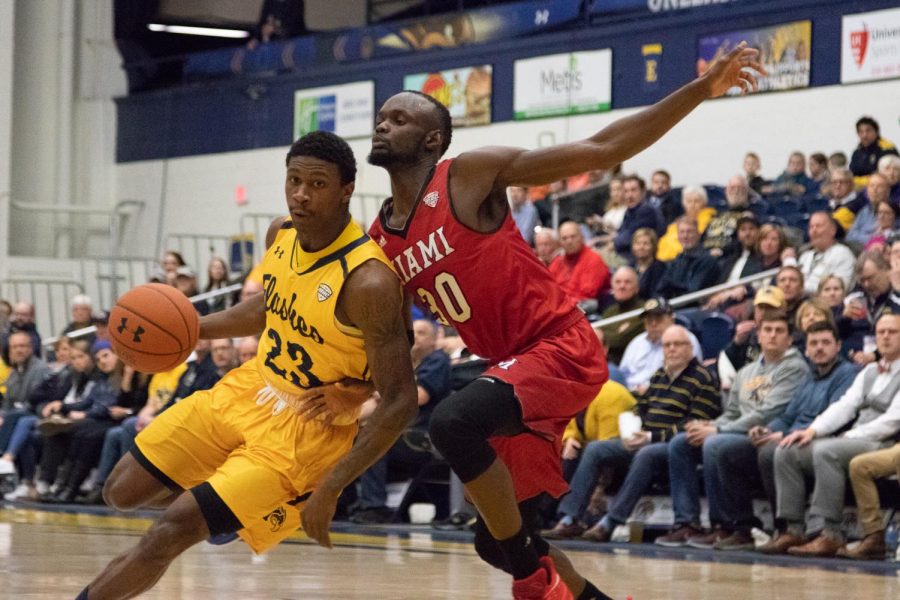 Jaylin Walker finished with about as many cuts and bruises as points.

Walker finished with a game-high 27 points against Miami (OH) (12-11, 4-6 Mid-American Conference), shooting a career-best 13-for-14 from the foul line in a 70-67 win. He shot 6-for-6 from the line over the final four minutes, including two after he was on the court for over a minute after getting poked in the eye with less than four minutes left.

“He looked like a boxer coming out of a 10 round fight,” coach Rob Senderoff said. “His eye was bloodshot, I don’t think he saw the basket, but he made all his free throws.”

On the Flashes penultimate possession the Flashes offense sputtered for the first 20 seconds of the shot clock until senior guard Jalen Avery called timeout. Walker was fouled hard again after an aggressive drive with less than 30 seconds remaining in the game to set up his game-winning free throws.

“We got exactly what we wanted out of the timeout,” Senderoff said. “Jaylin got the ball at the top of the key and (Miami forward Abdoulaye Harouna) was late getting to him because of the screening action. He was able to drive and get to the paint, and they had no choice but to foul him.”

Walker stepped to the line and made both free throws with 22 seconds left to give Kent State (17-5, 6-3 MAC) the 68-67 lead. He would knock down two more, after a final defensive stand by junior guard Antonio Williams and senior Akiean Frederick, to secure the 70-67 win.

Williams and Frederick neutralized the Redhawks’ most effective offensive weapon in guard Nike Sabande. Frederick was able to alter his shot in the final seconds after Williams applied enough pressure to force him to drive.

“Knowing that Frederick was behind me allowed for me to put more pressure on Nike,” Williams said. “I led him to the help.”

Williams secured two steals, which is the fifth time in six games that he has finished with two or more steals. He also scored 11 points on 5-for-7 shooting from the field. It was the first time that he has shot 50 percent or better since the Jan. 22 against Toledo. He has shot 58.4 percent since conference play started, which is an improvement from his 47.8 percent mark at the beginning of the season.

“I’m always going out there with confidence, especially knowing that coach Senderoff and my teammates are behind me,”  Williams said. “They always tell me to shoot the ball and take shots that I’m comfortable with.”

Frederick was the only other Kent State player to score in double-digits. He finished with 11 points on 4-for-7 shooting, but saw the majority of the second half minutes.

“(Miami center Bam) Bowman made two threes to start the second half,” Senderoff said. “We were struggling with our rotations. That’s why Akiean played almost the entire second half, and not Phil, because he’s more mobile.”

The Flashes played eight players, but Senderoff said that he would like to see others develop. The Flashes’ current lineup is struggling with minor injuries.

“Right now we have a lot of guys banged up,” Senderoff said. “Phil’s hand is taped, and I didn’t know if Antonio was going to play tonight until about an hour before the game. I’ve got some guys that I haven’t played over the last couple games that I know can help, but I just need to see more out of them in practice.”