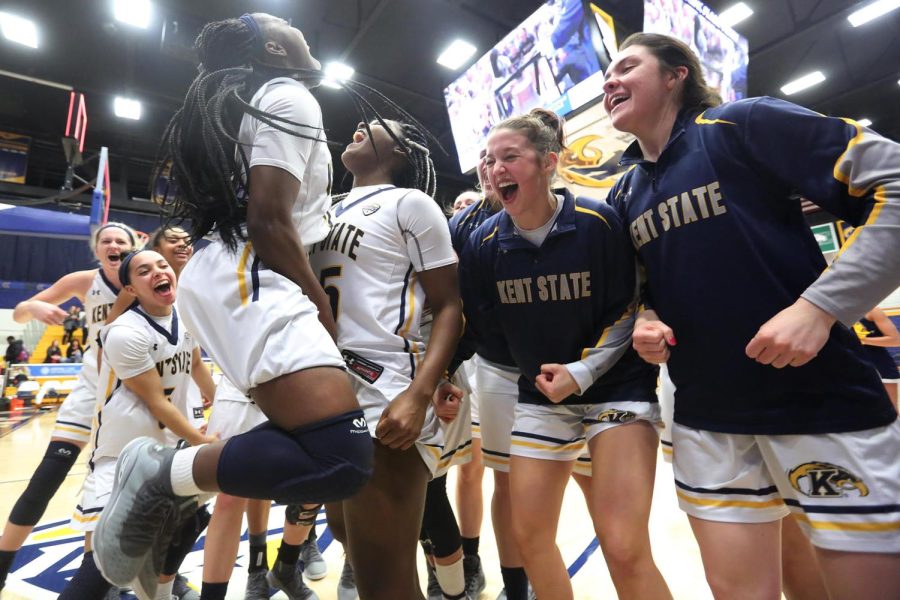 Members of the Kent State women's basketball team celebrate after the Flashes 67-58 win over Miami (OH) on Feb. 27.

Todd Starkey was hard pressed to find anything negative about the performance of the Kent State women’s basketball team after its 67-58 win over Miami (OH) on Wednesday night.

“We got four quarters,” Starkey said. “That’s what we have been hunting for all year. We finally got four solid quarters.”

The game was one that was defined by defense for the Flashes, as they held Miami to 58 points while forcing the RedHawks to commit 18 turnovers. In total, Miami scored 27 points in the first half and 31 in the second half.

“We struggled against Ohio, and that’s how they stayed in the game,” freshman guard Asiah Dingle said. “We knew we had to play from start to finish, for four quarters, and just play the best defense we could ever play.”

When the Flashes lost to Ohio University on Saturday, the Bobcats scored 44 points in the first half before being held to 25 in the second half. Miami, the first-place team in the Mid-American Conference, came into the game riding an 11-game winning streak, one that ended Wednesday.

“That’s a really good team we just beat,” Starkey said. “If you win 11 straight in this league you’re doing a lot right. I’m really pleased with our defensive effort all the way through the game.”

“It’s an unbelievable effort by those two seniors,” Starkey said.

Barber-Smith had six offensive rebounds as well, a fact that wasn’t lost on her teammates.

“I love playing with (Barber-Smith),” freshman forward Lindsey Thall said. “Sometimes when she’s not in, it falls on me to try and get rebounds while also doing other things. I think she does a great job coming in and getting rebounds. She had over ten rebounds today, and that’s great for us.”

The Flashes finished 24-for-56 (43 percent) from the field, a shade better than their season shooting average of 38 percent.

“It was a good overall effort, from everybody,” Starkey said. “Everybody needed to contribute to beat that team, and we did.”

Thall went 6-for-10 from the field for 16 points, the second-highest scoring total for the Flashes.

“I think Lindsey did a really good job of letting the game come to her,” Starkey said. “She didn’t force shots, but she got more aggressive off the dribble. What we are trying to do is turn her into a multi-dimensional scorer, and not just someone you can find at the three point line.”

With two road games coming up, against Bowling Green on Saturday and Akron next Wednesday, the Flashes are hoping that the victory Wednesday is the start of their own winning streak.

“You want to keep pushing to continue to play your best ball, to peak at the right time,” Starkey said. “I hope that’s some foreshadowing of what’s to come. One of the things that this team has kind of struggled with is the consistency thing. So if we can put another game together, at a really tough place to play at, Bowling Green, I think that would be a really nice sign.”