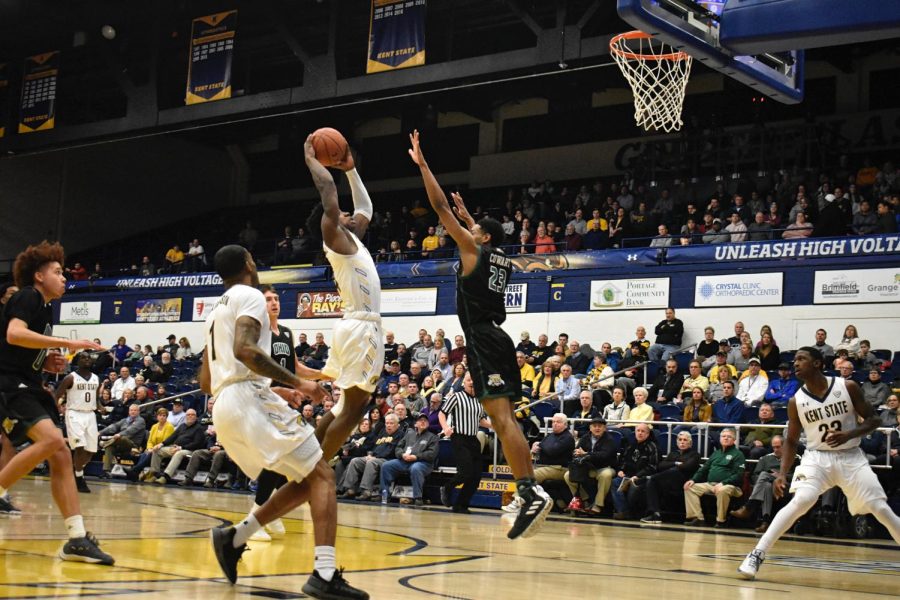 Kent State's Antonio Williams winds up to dunk over Ohio's Antonio Cowart Jr. in the first half of their game on Feb. 26. The Flashes won, 78-73.

If this were any other time in the season, Jaylin Walker and Jalen Avery probably wouldn’t have played Tuesday. But with the calendar quickly creeping closer toward March, Kent State coach Rob Senderoff needed his two banged-up seniors to step up Tuesday against Ohio.

Both of them did.

Walker knocked down big shot after big shot en route to 23 points, but the biggest shot came from Avery, who hit a three-pointer with 24 seconds left that gave Kent State a 76-72 lead.

Slump buster: With 18:44 left in the second half on Tuesday, Walker made a three. That in itself shouldn’t be a monumental statement, Walker — when hot — is one of the best shooters in the country. Walker came into Tuesday game, however, about as cold as you can be. He entered the Flashes’ game against the Bobcats in the midst of a 0-for-8 shooting slump, one that creeped out to 11 misses when he started out 0-for-3 from deep. But then something clicked in the second half. Walker shot 4-for-6 from three in the second half in a game that he wasn’t even supposed to play in. In total, Walker’s shooting slump lasted almost exactly 68 game-time minutes that stretched over three games.

Senderoff said after the game that Walker didn’t practice Monday after sustaining a quad injury on Sunday, and that him playing was a true game-time decision.

“He went through (early morning) shootaround and then he went into the training room,” Senderoff said. “He has a thigh bruise that he put a pad on.”

Senderoff said that Walker was in the training room from 3 p.m. to 6 p.m. Tuesday before doing shootaround with graduate assistant Jon Fleming where they determined he was healthy enough to play.

While Walker’s injury doesn’t figure to be long-term, it’s worth keeping an eye on. Walker past three games was arguably the worst stretch of basketball he’s played at Kent State, as he shot 17 percent from the field (7-for-41) to go along with 13 percent from three (2-for-15). If Walker can finish the season playing like he did Tuesday, then this Kent State team has a legitimate chance at making some noise in the MAC tournament.

Avery’s big three not only iced Kent State’s win but also gave the senior point guard some positive momentum heading into the Flashes’ final three games. Avery played 27 minutes against Buffalo on Saturday in his first action since spraining his ankle against Akron on Feb. 8. On Tuesday, he had six points and three assists in 28 minutes.

“I was looking at the shot clock and trying to milk some time,” Avery said of his last shot. “When I came off the screen, (the defender) went under and anytime someone goes under the screen, coach wants me to shoot the ball.”

Afterwards, Avery said he felt good but was still getting back to being fully healthy after spraining his ankle on Feb. 8 against Akron. Chances are that, up until the MAC Tournament, Avery’s minutes will probably sit in the 28-30 range. In both games back, he’s played off the ball more while both Antonio Williams and Anthony Roberts have taken over more of the slack in bringing the ball up the floor.

Williams (15 points on 6-for-12 shooting) cooled down after a hot start while Roberts had eight points and four assists off the bench. Both played well in Avery’s absence and are the perfect safety blanket for Senderoff as he attempts to assimilate Avery back into the lineup.

20 and up club: Tuesday’s win increased the Flashes’ record to 20-8, their first 20-win season since 2016-2017. The Flashes have now had seven 20-win seasons since Senderoff took over, with this season arguably being his most impressive job to date. The Flashes currently sit at 9-6 in the MAC with three games to go, with their nine wins matching their conference total from last year.

“To be able to (get to 20 wins) with three games left with where we were and what we’ve been through, I’m really proud of these guys,” Senderoff said after the game.

As of now, the Flashes currently sit tied with Central Michigan for the fourth seed in the MAC. The Chippewas hold the tiebreaker thanks to their 84-74 win over the Flashes on Feb. 19. If the Flashes finish at five, they’ll start the tournament playing a home game on Monday, March 11 against the 12th seed, Western Michigan, who lost to NIU by five on Tuesday.

The Flashes travel to take on Bowling Green on Friday in a game that could fast-track the Flashes’ chance to earn a bye to Cleveland. The Falcons, who are the second seed in the MAC, lost to Miami on Tuesday.