Homeless by choice: Ravenna man prefers life on the road 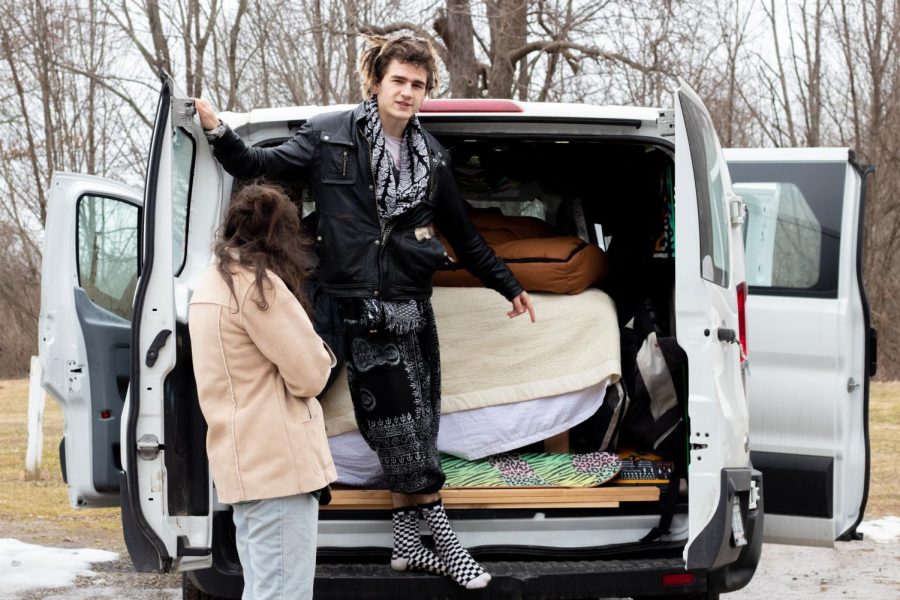 Alex Price opens his van. He used money from selling his house to buy this Ford Transit that he's retrofitted with a bed and shelving.

Alex Price felt like he was living in a video game six months ago. The 19 year-old grew deeply dissatisfied with what he felt was a never-ending, meaningless cycle, so he sold his house, bought a Ford Transit and headed west.

“I can do anything that is a part of anyone else’s lifestyle on my own whim,” Price said. “Any good parts of existing, if it comes up in my universe, I can just go be on top of it immediately.”

That unbridled freedom, Price said, overshadows any glimpse of what he saw in his former life. He added to his van a bed, electricity and shelving to hold his musical instruments, art supplies and tools.

With everything he needs resting on four wheels, Price said he can do whatever he wants, whenever he wants. However, he said the path to that lifestyle tried him psychologically.

“Things like that don’t just take a moment,” Price said. “It takes a whole long time of being unsatisfied with life.”

He struggled for years to pin down his life’s purpose amid toxic relationships and drug abuse, he said.

“I was trying to figure out how to properly be for a really long time while living in that house,” Price said. “Being completely nihilistic and bored with life, I couldn’t find any reason to take any meaning out of anything.”

But when he found inspiration in political and social commentators Joe Rogan and Jordan Peterson, Price rediscovered his passions and realigned his life with them, he said. Rogan, an internet talk show host, and Peterson, a psychologist and best-selling author, rapidly gained popularity last year among fringe psychology and conspiracy theories.

Listening to Rogan and Peterson’s ideas sustained him more than eating food, he said. With a rejuvenated mind, he felt called to venture across the United States.

When that feeling grew too strong to ignore, Price acted on it and has since bounced between his hometown in Ravenna and the western United States. The ease with which he’s sustained this lifestyle stunned him, he said.

“What it costs to maintain this is basically $250 in insurance a month plus fuel, like your gas and food,” Price said. “That’s all it takes to live this, and a Planet Fitness black membership. I don’t know how much you pay to have internet, electricity, water and an entire gym, but my utilities are basically paid for, $20 a month.”

Price plans to stay in Ravenna with friends and family for now because his van’s insurance recently expired, but his girlfriend, Helena Esparza, said they plan to go to Oregon together to learn glassblowing this summer.

She’s excited, she said, even after Price told a story of an altercation in Tucson, Arizona. He and a woman argued in a laundromat parking lot after he nearly scraped her car when he got out of his van. She drove off and he walked in the laundromat only to see her soon after walk in with her boyfriend.

“He demanded an apology,” Price said. “I was very alarmed. I was shook by this whole thing, but I handled it fairly well until she said, ‘Just f–king shoot him.’ I think that she wouldn’t have said that unless he had a gun on him right that immediate second, so I looked at him and said, ‘all right sir, I apologize.’”

The situation diffused after he apologized, he said, but that moment stuck with him.

To Price, the benefits of his “professionally homeless” lifestyle far outweigh its risks. He feels like he’s able to find meaning in life’s simpler experiences, he said. He travels so often to the West because he’s developed a new appreciation for nature.

“I remember doing yoga on top of this van, watching the sunrise in the desert,” Price said. “It’s just so pretty being that one with nature; you can just exist out there.”