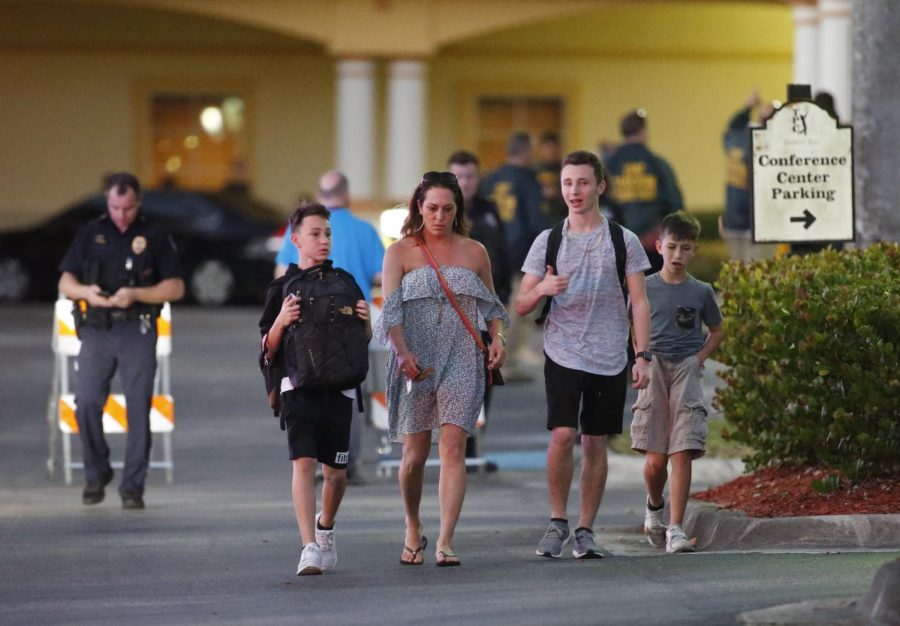 Family members pick up students of Marjory Stoneman Douglas High School in Parkland, Fla., at a nearby hotel, Wednesday, Feb. 14, 2018, in Coral Springs, Fla. A former student opened fire at the Florida high school Wednesday, killing more than a dozen people and sending scores of students fleeing into the streets. (AP Photo/Wilfredo Lee)

Do you remember their names? Do you? Do you remember how many victims there were, or are you you so fascinated with the killer that your mind runs straight to him? His name. His face. His dead eyes.

Seventeen lives were stolen, decimated by the heinous actions of one man. Yet through discussions, news articles and broadcasts, he remains in our minds, ingrained in our brains like a bad dream we want to wake up from. But for the victims of the Parkland shooting, they don’t get to have dreams anymore.

During the day-to-day hustle and bustle, it’s easy to lose track of the tragedies that have taken place over the years. The quantity doesn’t make any one of them less significant, but some leave a bigger impact than others.

Today, we remember Parkland. A year ago today, 17 people walked into Marjory Stoneman Douglas High School and never walked out, their lives ripped apart by the six minutes of senseless violence inflicted by Nikolas Cruz.

A year later, as we think about Parkland on its anniversary, we ask you to consider the countless lives affected by the tragedy. The parents who lost their children, the students who lost their friends, the survivors who are still grappling with the tragedy — the direction of their young lives changed forever that day.

The word “Parkland” is now synonymous with school shootings, a shorthand phrase for the worst — or final day — for thousands of lives. It was supposed to be the “final” school shooting, the one that finally initiated change. But as you read the stories of the survivors and listen to their mourning, think about how little has changed.

Yes, schools have instituted preventative measures, like metal directors, and updated security personnel in their schools, all of which are strong, necessary safety measures. But they’re just that: preventative safety measures. But that still isn’t enough. Schools are places for learning, where students’ bodies and minds grow in hopes of one day becoming leaders for the next generation. Instead, students and teachers now spend their days working on active shooter training. Instead of learning math variables, they’re sometimes learning the quickest escape route from their classroom.

We live in a society where news is created and consumed 24/7. One of the symptoms of this system is that we forget about news so quickly as our attention focuses on whatever new story has entered the national zeitgeist.

But on this anniversary, we ask that you don’t forget. Remember the names of those we lost a year ago. Learn from their stories, and care about the experiences they’re forced to relive.

But don’t ever, ever forget.