Students discuss being black within the LGBTQ community 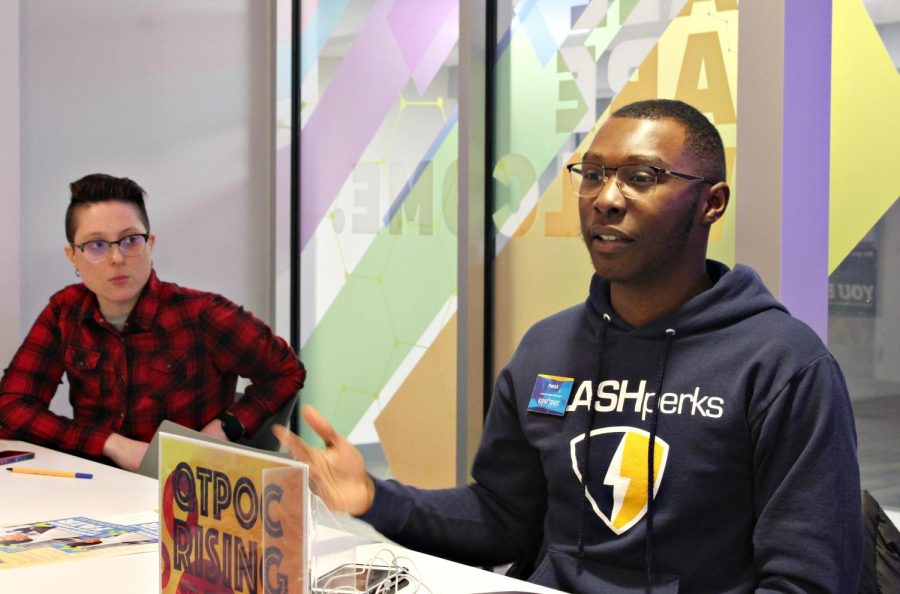 Katie Mattise (left), the assistant manager of the LGBTQ Student Center, and Patrick Ferguson, the vice president of BUS, share their perspectives on people of color in the LGBTQ community on Wednesday.

Students tackled the struggles and differences of being a member of the LGBTQ community while also being a person of color during a discussion hosted by the LGBTQ Student Center Wednesday.

“There was always a manual for being a black man but not for being a gay black man,” said Cameron Aloway, a freshman exploratory major and a LGBTQ Student Center intern.

The additional focus on Kent State’s impact within the creation of Black History Month and efforts made to equalize races on campus ensued interest within those in attendance.

Students watched videos including “Family Matters: On Race, Culture & Coming Out,” which details people’s stories of coming out to their families and “I’ma Be Me,” a stand-up comedy special by Wanda Sykes about what it would be like if she had to come out as black.

“White men have so many characters to look to in the media,” said Katie Mattise, program coordinator at the LGBTQ Student Center.

This discussion was a part of month-long activities and events the Division of Diversity, Equity and Inclusion hold to celebrate Black History Month.

Autumn Rietzel is the women’s and LGBTQ diversity reporter. Contact her at [email protected]