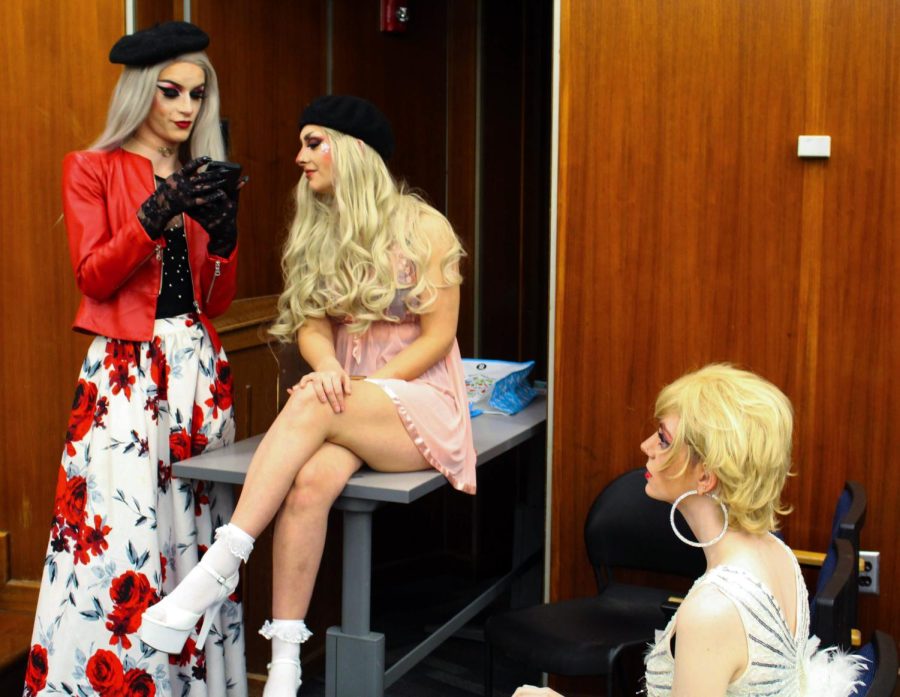 Drag queens take a moment off stage during a drag show at Bowman Hall on Friday, Jan. 25

Drag queens performed during an amateur drag show on Friday, Jan. 25, to be crowned the queen of the night.

PRIDE! Kent put on a show where drag queens showed off their talents.  Even as an amateur show, the event gave contestants an opportunity to show what they enjoy doing.

“I strongly, strongly believe that everyone has to start somewhere,” said Sam Hull, a sophomore fashion design major and president of PRIDE! Kent.

Throughout the night, seven drag queens competed using songs from a wide range of genres.  The audience heard songs ranging from punk to musicals and performances that matched.  The flair, glamor, beauty and charm that each drag queen focused on during her performance helped to get a reaction from the audience.

“When I see a crowd responding well to my performance, it’s the best feeling ever,” said Omega, the winning drag queen of the night. “When they’re cheering me on, it means that I’m doing something right.”

Kicking, flipping, interacting with the audience, wigs flying, lip-synching and dancing, the queens earned erupting applause and shouts from the audience.  Each time a queen performed a stunt, “yes queen!” and “work it!” blared from the audience paired with applause.

“I think we got to see a lot of different varieties of what drag can be,” said Mason Makuch, a junior fashion design major.  “Drag is a way of expressing yourself, and it lets you see people being the most confident version of themselves.”

Drag queens entice the audience while performing, but putting on a show brings deeper meaning for some of the queens.  The clapping and cheering are, in a way, therapeutic for the drag queens where it eliminates any doubts they had before.

“It feels nice to be validated in any sense,” said The Maelstrom, sophomore theater major and runner-up for the crown. “It’s hard to get validation from the LGBTQ community sometimes, and this is my outlet for that.”