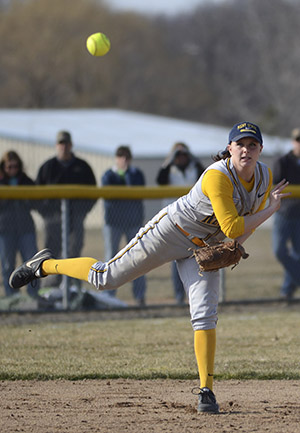 Kent State softball player Lauren Kesterson throws a ball to first base during a during a double header against University of Akron on Saturday, March 30, 2013.

Kesterson, who is represented by Ashlie Sletvold of the Chandra Law Firm, raised five issues in the appeal, which challenges the summary judgment against Kesterson.

A “summary judgment” is a judgment issued by a court for one party and against another.

According to court documents, the health situation prevented Kesterson from being able to include key witnesses and obtain testimony about what she said was indifference toward her report prior to her meeting with Erin Barton, the deputy coordinator for Title IX, in 2015.

The original case, filed in Feb. 2016, said former softball coach Karen Linder’s son, Tucker, raped Kesterson in her dorm room in December 2012. Kesterson claimed Karen Linder,violated the Title IX mandate by failing to report the alleged incident after Kesterson informed her of the assault in 2014.

Universities and its employees are required to report all instances of gender/sexual harassment, sexual misconduct, stalking and intimate partner violence to a Title IX coordinator or deputy coordinator, according to section 5-16.2 of the University Policy Register.

Kesterson also said she reported Tucker’s actions to the athletic department in 2015, but Director of Athletics Joel Nielsen prevented the filing of a formal complaint and no-contact orders.

In Nov. 2018, Lioi ruled, before the case went to trial, there was no evidence to support Kesterson’s claim that Kent State ignored her Title IX’s rights.

Oakley was dismissed in the original ruling, while Linder was granted partial relief. Linder was also found to have qualified immunity in the case, which means she is protected as a government employee

Linder attempted to to connect Kesterson with counseling and assured her that Tucker was unlikely to return to campus, and in fact, he did not. Linder also called Kesteron’s mother to apologize and continued to check in on Kesterson over the summer, according to court documents.

Linder took action so under these circumstances, she is entitled to the protections of qualified immunity.

“Ms. Kesterson is confident that she will prevail with the appeal,” Sletvold said.

“The Nov. 5 judgment reinforces what we have said from the beginning: Kent State University followed all rules and procedures under Title IX in support of our students. The judgment speaks for itself.”

No hearings are currently scheduled at this time.

Chris Ramos is a general assignment reporter. Contact him at [email protected]