Q&A: Rock salt intake at KSU, how it affects campus 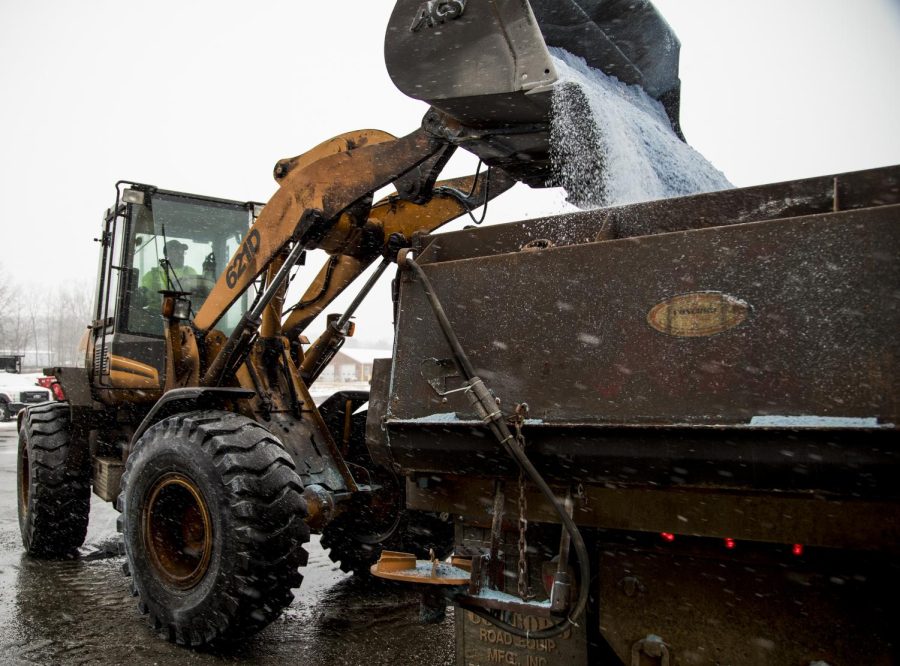 Jeff Derthick, a snow plow operator for the Ohio Department of Transportation, operates a front-end loader as he fills his truck with eight tons of rock salt and prepares for Winter Storm Harper on Saturday, Jan. 19, 2019. He was in the first hours of a 12-hour shift for the city of Ravenna.

In an interview with Lauren Kinsman-Costello, an assistant biology professor, KentWired explores the effects that rock salt has on and off campus.

KentWired: What can you tell me about the rock salt we use on campus?

Lauren Kinsman-Costello: I can tell you that chemically, it’s not that different from the salt you put on your food. It’s got maybe more small amounts of other things besides sodium and chloride. All the different kinds of salts that we use throughout campus, when they melt the ice that they’re supposed to melt or later on when the rain comes, all that salt dissolves in the water and the water carries it into the storm drains … basically big pipes that run under campus. That takes all of that water essentially, eventually, into the Cuyahoga River.

That’s a problem from an environmental perspective because the streams, the wetlands and the rivers in Northeast Ohio are all nominally freshwater, and so when organisms that have evolved and adapted to live in freshwater all of the sudden are in a situation where there’s more salt than they’re used to, it can stress them out. … A lot of it has to do with osmosis, but one way or the other, you know, some critters can handle this all better than others. At the end of the day, most streams, wetlands and ponds and rivers in areas that have extra salt have fewer kinds of organisms living in them.

KW: What kind of potential damage can it cause in Kent?

LK-C: The university is a part of the Summit Street Improvement Project. (The university) reconstructed and redesigned a stormwater wetland that you may have noticed — they kind of rerouted Campus Center Drive. Now, there are two ponds on either side of that, and those are both improved stormwater ponds. The goal is to make some bigger basins that can hold more water so that when snow melts or when it rains a lot, the water gets trapped there and doesn’t overwhelm the city of Kent stormwater system.

The added benefit of making these systems the way that they did is that they’re going to function like natural wetland ecosystems. The goal is to try and get a diverse community of (species) coming and visiting these wetlands so that we get all these benefits in addition to the stormwater retention and cleanup. But even in a best-case scenario, no matter how well-designed those wetlands are, they’re still receiving all this road salt. That’s just a reality. That’s one example where the fact that we have to use salt to, you know, walk safely and drive safely, kind of puts a cap on the diversity of organisms that are going to be able to live in those wetlands no matter how good of a job we do at designing them.

KW: What can you tell me about the stormwater drains on campus?

LK-C: Each one of those goes to this really big network of pipes that’s underneath the whole campus. It’s really easy to forget that we’ve got this really complicated, really dense network of infrastructure underneath our feet. Those pipes all go to other pipes that are owned by the city of Kent, and those all end up going to the Cuyahoga River.

So that’s why I say if the university wasn’t here, if it was just the wetlands and forests that were once here, a lot of those pipes would end up being the same place as its streams would be or wetlands would be. We’ve sort of buried those streams underground, and what that means is it very effectively gets water off of the sidewalks, off of the lawns and roads and away from homes and infrastructure that you don’t want to be flooded.

And the other thing is, it’s not interacting with any soil, or with any organisms that can help process some of the things that can be harmful downstream. Like salt, like fertilizer, nutrients, like oil slicks. It’s just this kind of gross, yucky, urban soup once it gets in there.

KW: So our pipes don’t interact with the Cuyahoga River watershed?

LK-C: The city of Kent’s drinking water comes from groundwater. What that means is there is this sort of slow buildup of salt accumulating in aquifers, which are the vast bodies of water under the Earth, but it’s a lot slower than what we’re measuring in wetlands and streams. So while increasing salt concentrations in our drinking water is something we should certainly be thinking about and aware of in terms of a slow creep toward that, it’s not as much of an immediate threat as it is in a place, for example, like Flint. Sometimes it’s not necessarily even the salt itself that’s the problem, but all of the cascading effects that salt can have by mobilizing these other nasty things that we don’t want in our water.

KW: While the university is not looking to switch from rock salt, do you think that there are other solutions to look into?

I’ve looked into the different alternatives for deicing and salt, and there are no easy solutions. Other people have tried like beet juice and pickle brine, and then other things like that, but I’ve seen publications that beetroot juice can be toxic to tadpoles. They all kind of come with their own kinds of environmental insults. It’s one of these … environmental challenges and you have to think of it holistically balancing the economics.

There are a lot of municipalities and organizations that are moving away from rock salt just because of the cost and the fact that, a lot of years, there are shortages, and that’s really what drives the amount of salt that gets put down.

KW: Do you think the city of Akron is more at risk since they use reservoir water compared to Kent, which uses groundwater?

LK-C: I would have to think about that. I wonder if their level of risk is similar because they get a lot of their water from Lake Rockwell, which is a reservoir along the Cuyahoga River. One benefit of their reservoir is it’s high up in the watershed. If you trace the water that’s feeding that reservoir, it’s coming from more forested lands, less urban areas, places where there are fewer roads and buildings to put salt on them, and they’ve also done a really good job of protecting the land around it.

KW: Between reservoir water and groundwater, is there a risk with one more than the other?

LK-C: It really depends on the well, and it really depends on the aquifer. So I know, for example, even wells that are relatively close to one another, I’ve seen the highest incidence … where the salt is so high in the drinking water, you can taste it and you stopped drinking it. Those are wells that are close to where salt piles are being stored ineffectively. I would not say offhand that either is more or less at risk than the other.

KW: What actions can we can take to reduce the damage of salt, such as to the wetlands you mentioned?

LK-C: I think smart salt usage is important. Being really mindful about the balance between safety and the environment. And I think just awareness that there can be negative effects of salt would change a lot, because without that awareness, it’s really easy to think that more is better. Let’s make sure that everybody’s safe, even if we’re not sure, whereas just having that knowledge that, you know, on a day when the risk of ice accumulating is really low, then there’s this elevated risk of environmental effects.

Madison MacArthur is a senior reporter. Contact her at [email protected]