Try to remember Ted Bundy was a serial killer first 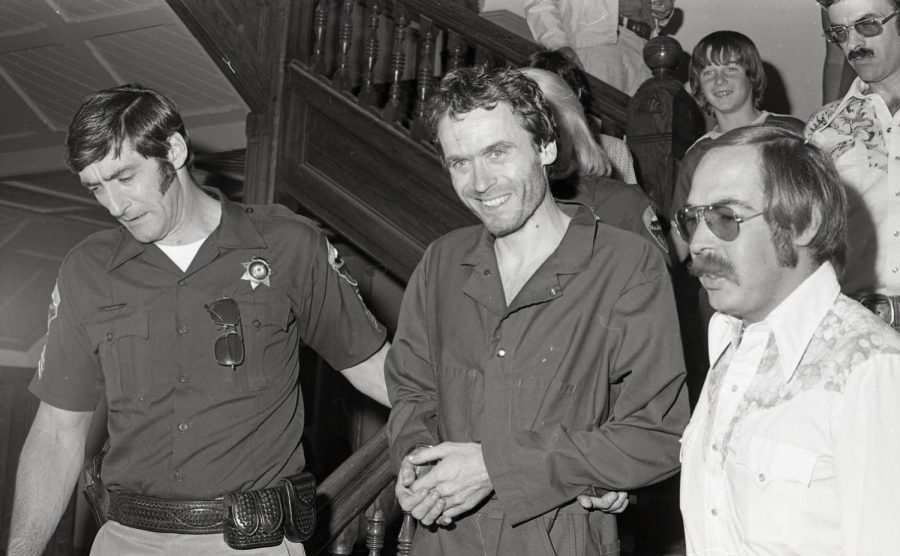 Serial killer Ted Bundy, center, is escorted out of court at the Pitkin County courthouse, Aspen, Colorado, in 1977.

In the span of just three days, Netflix released “Conversations with a Killer: The Ted Bundy Tapes,” a four-part documentary series, and Sundance premiered a trailer for “Extremely Wicked, Shockingly Evil and Vile,” a biographical movie starring Zac Efron. Whether we wanted or not, Ted Bundy has been shoved into the limelight 30 years after his death. So, let’s talk about it.

Ted Bundy was a rapist and serial killer active in the ’70s. He targeted young women and teenage girls, regularly using his attractiveness and charisma to lull them into a false sense of security and lure them away from crowds.

Shortly before his execution in 1989, Bundy confessed to 30 murders, but case file evaluations, researcher estimates and even suggestions from Bundy himself could put that number closer to 100.

He was evaluated as a manipulative sociopath, gaining the public’s sympathies even after a guilty verdict. One of his own lawyers called him “the very definition of heartless evil.” He is, without a doubt, one of the most notorious serial killers in American history. That’s not up for debate.

But here’s something that the internet thinks is up for debate: Bundy’s appearance, supposed charm, personality and more.

Here’s the deal. Ted Bundy was a decent-looking man. He didn’t have any outstanding features; he was a rather generic-looking man, and he seemed harmless enough at a glance. He looked like a used car salesman, and I mean that in a way that I hope isn’t offensive to used car salesmen. Most of the photos Twitter uses to say he’s hot were taken in professional contexts where he was groomed — like for headshots or, you know, at his own trial for murder.

And there lies something worth acknowledging. The people tweeting that Bundy was hot are fully aware that he was a serial killer. Context matters, and they are cognizant of it. But that context is nowhere in their tweets.

When those who tweeted about Bundy’s “hotness” did so, they were disregarding the fact that Ted Bundy used to keep his victims’ severed heads as mementos. I can only assume she didn’t do it maliciously, but when you send a 15-word tweet (I’m looking at you Chencha) that dismissively refers to people’s acknowledgment of Ted Bundy murdering up to 100 or more women and girls as “say what you want,” perhaps you’re stressing the wrong point.

Falling for Bundy’s magnetism while recognizing that he was a sadistic rapist and murderer is something that the public of the ’70s and the Twitterverse have in common. So it’s not exactly a new phenomenon; it’s just gotten its rebirth with two new pieces of Bundy-related media.

Speaking of that media, Efron, known beautiful man, is playing Ted Bundy in “Extremely Wicked, Shockingly Evil and Vile.” That has understandably sparked some controversy — many say Efron being in the role glorifies Bundy. And it’s worth acknowledging that Efron, unlike Bundy, is almost objectively hot. He has piercing baby blues and a jawline that would cut me if I stared for too long.

What’s important is that Efron’s good looks and charisma are exactly the point of his casting. The movie is about Ted Bundy’s image. He was a trustworthy-looking man with a trustworthy-seeming charm. Efron is the final bump to get the message across.

The plot itself comes from the perspective of Elizabeth Kloepfer, Bundy’s long-term girlfriend at the time of the trial, played in the movie by Lily Collins. Just like the public, just like his victims, Kloepfer was lured in by Bundy. Even the judge who sentenced him to death, whose quote is the basis for the film’s title, offered his sympathies to the killer in his final statement.

So any measure of glorification is coming from the internet itself. Users of Twitter and its counterparts are no strangers to glorifying problematic figures, to put it lightly in this case. Look up anything regarding rapper XXXTentacion; he’s a good example.

But this isn’t an issue of art versus artist. There is no art to include with or detach from Ted Bundy as a person. This is not the debate over James Gunn’s past homophobic tweets and whether or not we can forgive him and enjoy the “Guardians of the Galaxy” movies. We’re disputing the attractiveness of a known rapist and serial killer.

Your own opinion on Ted Bundy’s looks is not a comment on you as a person, but I’d say your prioritization of those looks versus his deeds very much could be. If you want to talk about whether Bundy was hot or not, that’s your prerogative. But no matter the context of that conversation, his “hotness” is intrinsically tied to an “extremely wicked, shockingly evil, vile” methodology of rape and murder.

Aaron Hluch is an entertainment writer. Contact him at [email protected]