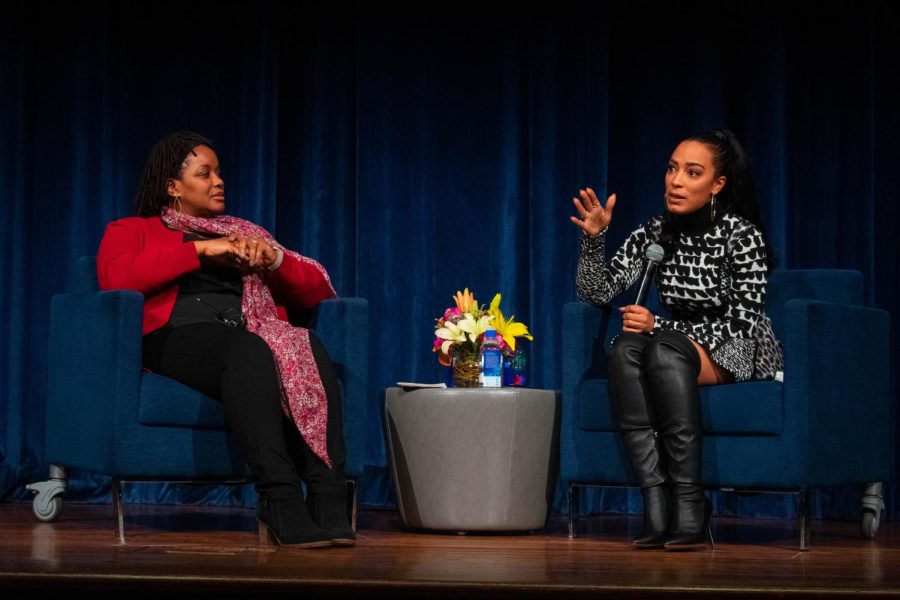 Amoaba Gooden (left), the chair of the Department of Pan-African Studies, and keynote speaker Angela Rye answer audience questions during the Q&A portion of the Martin Luther King Jr. Celebration on Wednesday, Jan. 23, 2019.

Kent State’s annual Martin Luther King Jr. Celebration featured six speakers and a diversity award ceremony, all geared toward stressing equality and principles of love during a time of political and social unrest on Jan. 23 in the Student Center Ballroom.

Keynote speaker Angela Rye, the CEO of IMPACT Strategies, a lawyer and a political strategist, spoke on the current political climate, including the government shutdown, immigration and President Trump as part of her #WorkWoke tour.

The celebration was kicked off with opening remarks by Shana Lee, the director of Diversity and Inclusion,

and a song led by a Kent State student titled “Lift Ev’ry Voice and Sing.”

University President Beverly Warren then took to the stage to welcome attendees to the celebration, where she urged community members to listen to others’ perspectives.

“At Kent State, we joined other institutions and individuals in working toward this vision of universal equality and living our lives with a commitment toward making the world a better place for all, even a half century removed from

Warren then announced Kent State was ranked fourth in the country for best employers for diversity in the workplace, according to Forbes.

“We are a community of diverse beliefs and the power and diversity that we share,” Warren said. “I think in doing so, we know that we will indeed build a better tomorrow. One act of kindness, one act of courage at a time.”

Following Warren was the award ceremony led by Alfreda Brown, vice president for Diversity, Equity and Inclusion. The three awards, one of which recently named after Warren, included the introduction of a new student award, the Rozell Duncan Student Diversity Award, named after a Kent professor who died from cancer.

Adopting one of MLK’s most cherished aspects of activism, Rye’s main focus within her speech was love, saying that love is her word for 2019.

“Too often we see love and nonviolent action as weak, and it is quite the contrary,” Rye said. “Treating your neighbor with the respect they deserve, the respect that you would hope would be reciprocating, that is the true definition of power and strength,” Rye said.

“There’s a quote from Dr. King that says, ‘the time is always right to do what’s right,” Rye said. “It is imperative that if you are in any position of power, even if you think the position isn’t powerful enough, that you use your voice to stand up for others who may not have that same right.”

Bobbi Broome, a senior psychology major, said Rye made her feel inspired and was able to relate to her speech.

“I feel like her words have so much power,” Broome said. “I feel encouraged and ready to get out in the world and make a difference. I can say that, but it doesn’t mean anything unless I follow through, so I feel like following through today.”

Rye said that the first step for students who want to be involved in activism is to not overthink.

Rachel Hale is the general assignment editor. Contact her at [email protected]